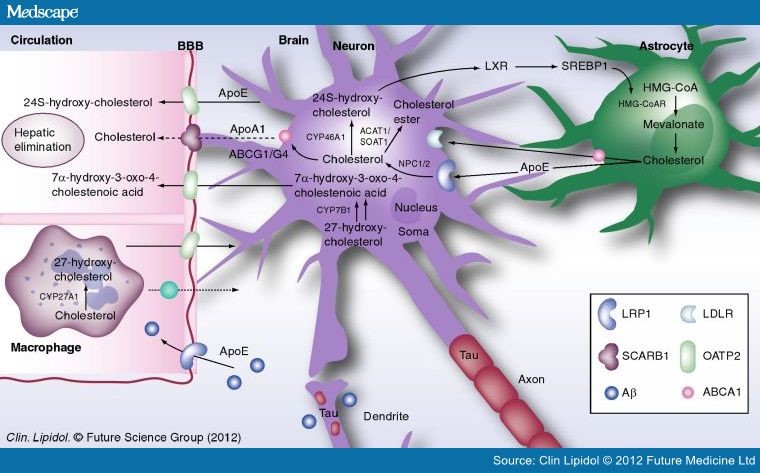 It is know for some years that Alzheimer's disease is characterised by two types of lesions, amyloid plaques and degenerated tau protein. Cholesterol plays an important role in the physiopathology of this disease.

Excess brain cholesterol cannot freely cross the blood-brain barrier; to be eliminated it must be converted into 24-hydroxycholesterol (24-OHC) by the enzyme CYP46A1 (cholesterol-24-hydroxylase).

Researchers proposed the hypothesis that increasing the efflux of cholesterol from the brain by overexpressing CYP46A1 might have a beneficial effect on the elements of Alzheimer pathology.

The first step in this work made it possible to show that injecting a viral vector, AAV-CYP46A1, effectively corrects a mouse model of amyloid pathology of the disease, the APP23 mouse. CYP46A1 thus appears to be a therapeutic target for Alzheimer's disease.

Conversely, in vivo inhibition of CYP46A1 in the mice, using antisense RNA molecules delivered by an AAV vector administered to the hippocampus, induces an increase in the production of Aß peptides, abnormal tau protein, neuronal death and hippocampal atrophy, leading to memory problems. Together these elements reproduce a phenotype mimicking Alzheimer's disease according to publication in Human Molecular Genetics.

These results further confirm the relevance of CYP46A1 as a potential therapeutic target (work published in Brain recently).