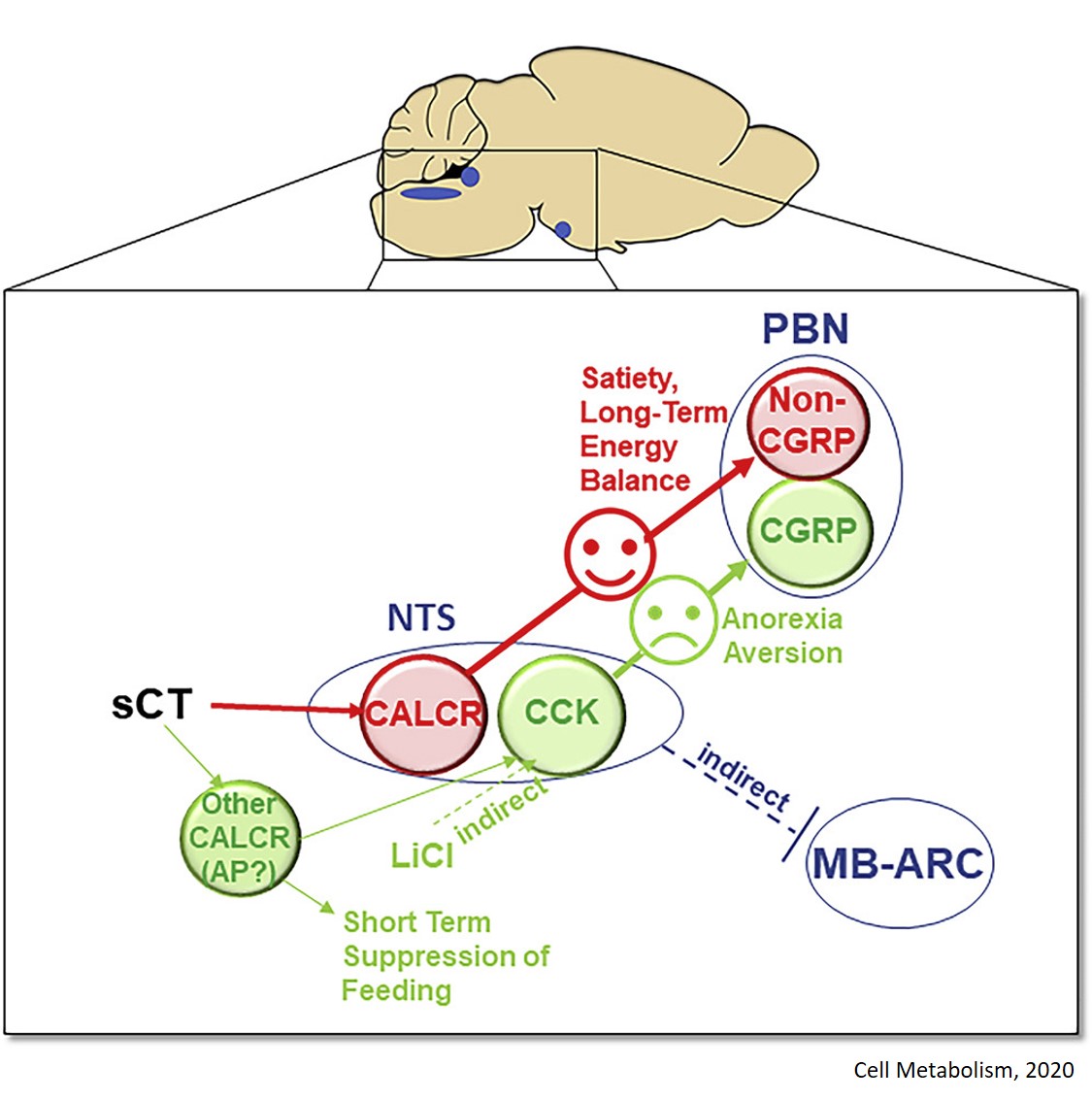 Ever eaten something, gotten sick and then didn't want to eat that food again because of how it made you feel? That's because a signal from the gut to the brain produced that sickness, creating a taste aversion.

Conventional wisdom renders there's one circuit in the brain that suppresses eating -- it comes from the stomach and makes you feel sick if you activate it too hard. Eating a portioned meal makes your body happy, though, even while stimulating a signal to the brain to stop eating, according to the senior author.

"Therefore, there must be a circuit that stops normal feeding without the adverse effects, right?" says the author.

Now, a Cell Metabolism study may have discovered this second circuit in mice. A team of researchers sought to better understand which part of the brain curbs appetite and which neurons play a role in making mice want to eat or not eat.

The gut-brain signal that suppresses appetite is triggered by a type of neuron, containing calcitonin receptor (CALCR), which lives in a structure of the hindbrain called the medulla. Interestingly enough, these neurons didn't need to be active in the brain for gut sickness to cause an aversive response.

"This suggested we might be able to dissociate the brainstem systems that stop feeding from those that cause nausea," says the author, whose group found they could genetically activate those CALCR neurons to do just that.

Since there are neurons that can suppress eating but also cause aversive effects, that must mean there are different types of neurons, or circuits, in the brain that can terminate feeding with differing emotional responses.

When the researchers inactivated the CALCR neurons, they were surprised to make another discovery, which contradicted the idea that the brain only controls short term meal sizes and consumption.

Turning these neurons "off" didn't only interfere with the suppression of feeding by gut signals, but it also caused an ongoing increase in food intake. The mice became obese, suggesting that the brainstem systems don't only control meal size, but the amount of food consumed long term. This created a predisposition to obesity because of the energy imbalance in the mice (more input than output).

Similarly, activating CALCR neurons decreased the mice's food intake and body weight without any aversive gut effects. In the study, Myers and his team found another neuron, CCK, also decreased food intake and body weight but created an aversive internal response, unlike the CALCR neurons. The difference between the two neurons were found in their circuits.

"CCK activates what we would call a 'yucky circuit'," says the author. "The neurons activate a certain CGRP cells, which create that sick feeling." Unlike CCK, activated CALCR neurons follow a "yummy circuit", activating non-CGRP cells.

Obesity affects more than one-third of the adult population in developed countries, which can lead to diabetes or other serious, long-term health conditions like heart disease, explains the author, who is also the director of MDiabetes.

Unfortunately, many diet drugs work, but they make people feel nauseous after they take them. Obesity remains a condition difficult to pharmaceutically manage, since the treatment options have limited therapeutic utility. A drug that turns "on" CALCR and turns off "CGRP" could greatly benefit patients with obesity by suppressing feeding and creating a long term control of food intake and body weight.

"If we could figure out a drug for individuals with obesity that suppresses food intake to produce long term weight loss without the negative side effects, it could absolutely change someone's life," says the author. How bone marrow stem cells get energy to fight infection