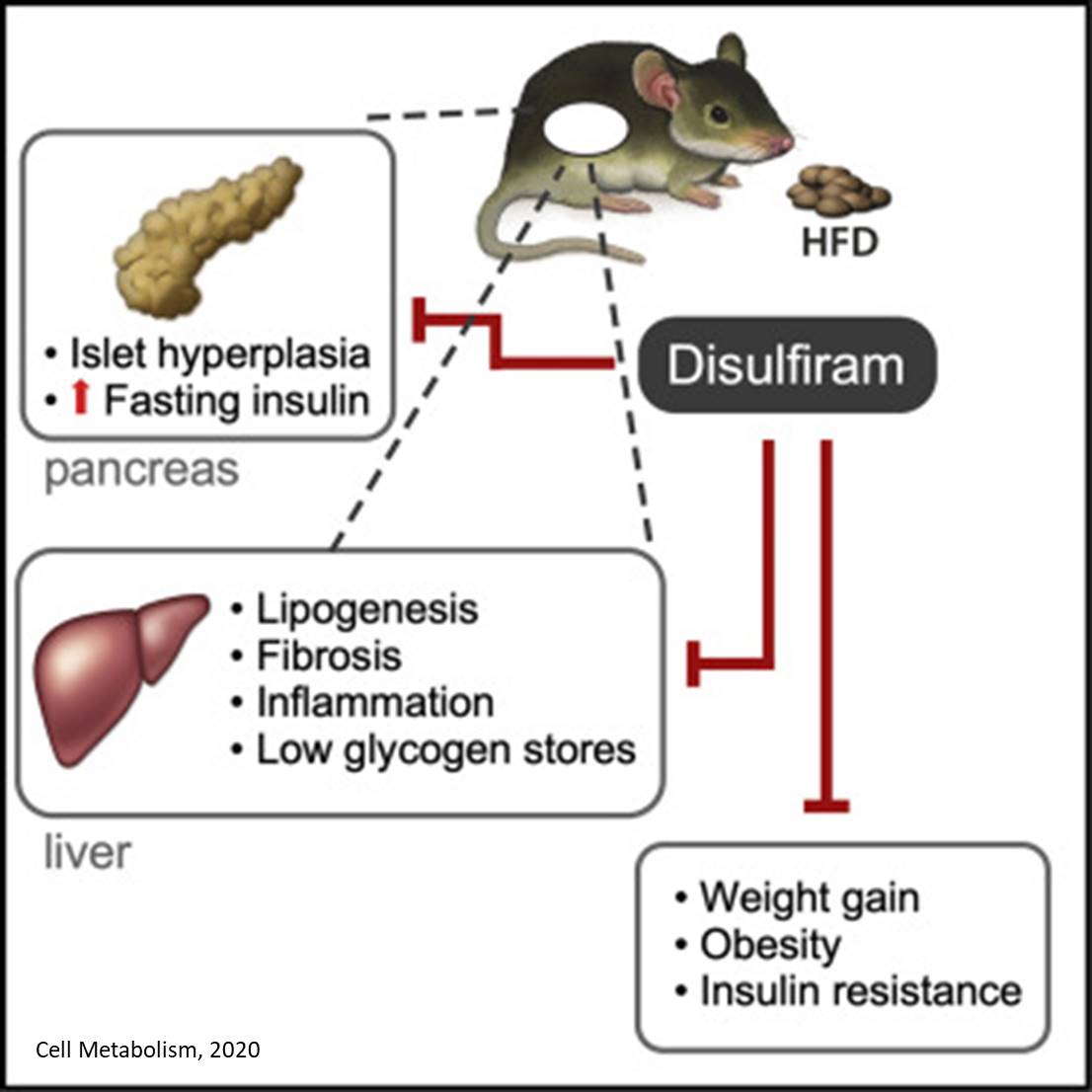 An off-label experiment in mice using disulfiram, which has been used to treat alcohol use disorder for more than 50 years, consistently normalized body weight and reversed metabolic damage in obese middle-aged mice of both sexes. The results were published in the journal Cell Metabolism.

The scientific team studied groups of 9-month-old lab mice who had been fed a high-fat diet for 12 weeks. As expected, this diet made the mice overweight and they started to show signs of pre-diabetes-like metabolic problems, such as insulin resistance and elevated fasting blood sugar levels. Next, the scientists divided these mice into four groups to be fed four different diets for an additional 12 weeks: a standard diet alone, a high-fat diet alone, a high-fat diet with a low amount of disulfiram, or a high-fat diet with a higher amount of disulfiram. As expected, the mice who stayed on the high-fat diet alone continued to gain weight and show metabolic problems. Mice who switched to standard diet alone gradually saw their body weight, fat composition and blood sugar levels return to normal.

The mice in the remaining two groups, with either a low or high dose of disulfiram added to their still-fatty food, showed a dramatic decrease in their weight and related metabolic damage. Mice on the high disulfiram dose lost as much as 40% of their body weight in just four weeks, effectively normalizing their weight to that of obese mice who were switched back to standard diet. Mice in either disulfiram dose diet group became leaner and showed significant improvement in blood glucose levels on par with the mice who were returned to standard diet. Disulfiram treatment, which has few harmful side effects in humans, also appeared to protect the pancreas and liver from damage caused by pre-diabetic type metabolic changes and fat build up usually caused by eating a high-fat diet.

According to study's research team, the key to the positive results seem to stem from disulfiram's anti-inflammatory properties, which helped the mice avoid imbalances in fasting glucose and protected them from the damage of fatty diet and weight gain while improving metabolic efficiency. Both groups of obese mice (control and disulfiram) were not subjected to any form of exercise, nor did they demonstrate noticeable spontaneous behavioral changes. Based on the evidence they observed, the researchers believe the beneficial results of disulfiram stem solely from the drug. They did not observe any negative side effects from disulfiram in the mice.

The research team stresses that these results are based on animal studies, and they cannot be extrapolated to any potential benefits for human at this point. It is recommended that disulfiram not be used off-label for weight management outside of the context of clinical trials. Still, given the findings, they are planning future steps for studying disulfiram's potential, including a controlled clinical study to test if it could help individuals with morbid obesity lose weight, as well as deeper investigation into the drug's molecular mechanisms and potential for combining with other therapeutic interventions.