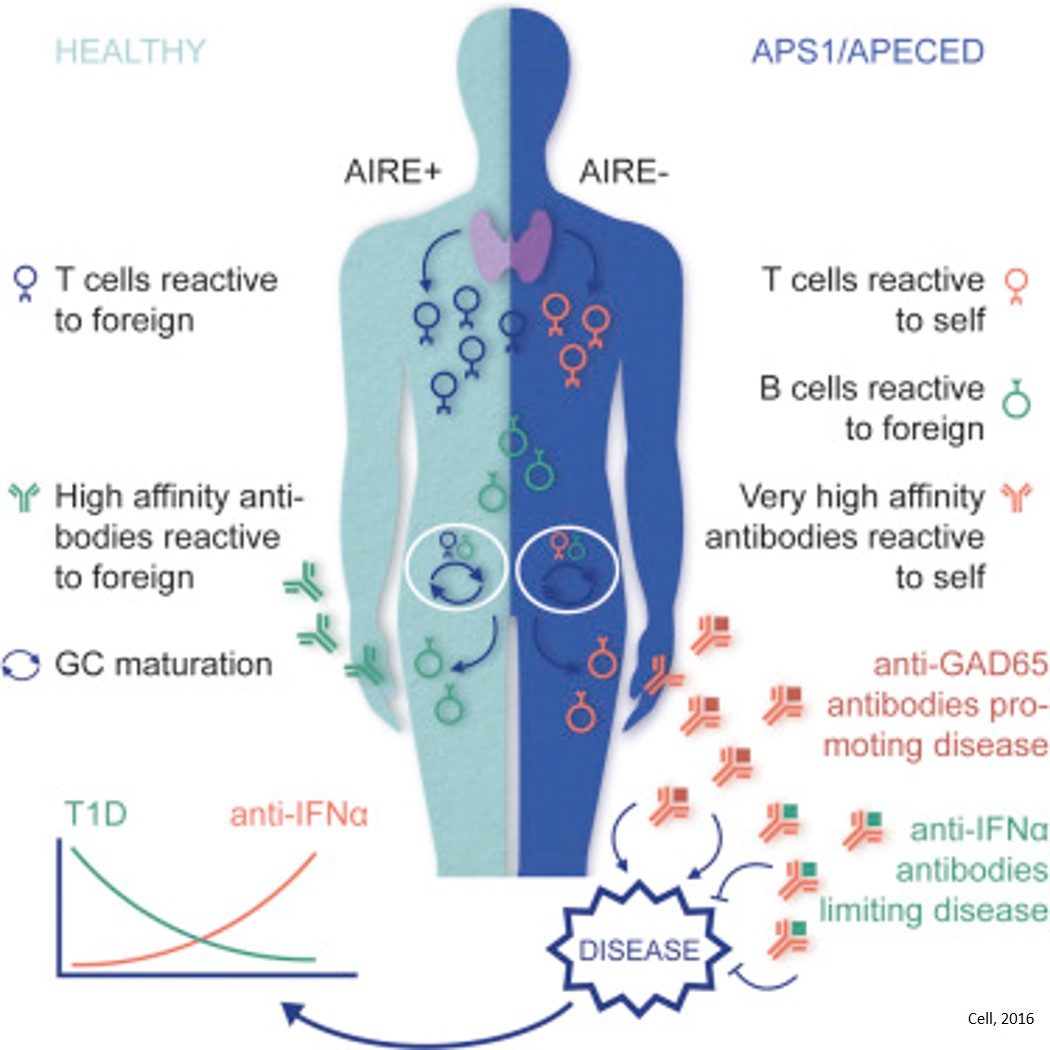 People with a rare autoimmune disorder produce autoimmune antibodies that appear to be linked to a reduced occurrence of Type 1 diabetes, new research has found. The study, published in Cell, suggests these antibodies could limit immune-related diseases and may have therapeutic potential.

In an international study samples were taken from 81 people with a rare autoimmune disorder, called autoimmune polyendocrine syndrome type 1 (APECED), who have defects in the autoimmune regulator gene. Defects in this gene mean it can no longer fulfil its role as a regulator that helps purge the body of autoreactive immune cells termed T cells that can react against the body's own proteins, mistaking them for a foreign invader.

Senior author of the study said: 'APECED is a rare and poorly understood autoimmune disease. The defect in the autoimmune regulator gene should put APECED patients at severe risk of developing myriad autoimmune diseases, including type 1 diabetes, multiple sclerosis, lupus and rheumatoid arthritis in which an immune system that has not been purged of autoreactive cells attacks vital organs.

Yet it's very unusual - possibly unprecedented - for APECED patients to develop multiple sclerosis or lupus, and most do not develop type 1 diabetes. So why don't they get these diseases? We wondered whether we could find out a lot more from these patients about basic human immunology and how their immune systems might be keeping these diseases at bay.'

The senior author added: 'This is very significant because antibodies make up one of the largest sectors of the pharmaceutical market, and one of the great quests in the pharmaceutical industry is to be able to routinely generate antibodies against human proteins implicated in diseases. Rather than committing immense resources and expense to drug discovery, which is at best a very uncertain path, the findings suggest a route to drug recovery, in which naturally arising highly efficacious autoantibodies can be isolated from patients whose clinical information guides us as to the diseases most likely to benefit from those antibodies.'

To discover if APECED patients' autoantibodies could have therapeutic potential, the team tested them in a mouse model of psoriasis, an autoimmune condition that causes red, itchy and scaly skin. They found that injecting the mice with autoantibodies from the APECED patients could inhibit the development of psoriatic pathology.

The senior author commented: 'After establishing the antibodies could protect mice from a form of psoriasis, there came the realization that perhaps the antibodies were actively limiting disease in the APECED patients themselves. Perhaps this was why the patients were arguably not so ill as they might have been expected to be.'

The patients without diabetes produced autoantibodies that completely impaired the activity of a subtype of interferon known as interferon-alpha, which is produced by the immune cells and may cause inflammation. By contrast, such potent antibodies were not produced by patients with diabetes. Therefore the authors suggest the naturally-arising autoantibodies could be inhibiting the effect of interferon-alpha which some have suggested may be linked to the development of type 1 diabetes.

The senior author observes: 'Such striking correlations with type 1 diabetes were not evident for any other naturally arising anti-interleukin or anti-interferon antibodies, providing perhaps the strongest evidence yet in humans that interferon-alpha may contribute critically to the natural progression of type 1 diabetes.'

'This study provides correlational evidence for active anti-interferon antibodies providing protection from type 1 diabetes, but more research is needed to prove causation in humans. These findings give a firm foundation for exploring the potentials of autoantibodies from APECED patients to ameliorate type 1 diabetes and other important autoimmune diseases that are rarely, if ever, present in APECED patients.'