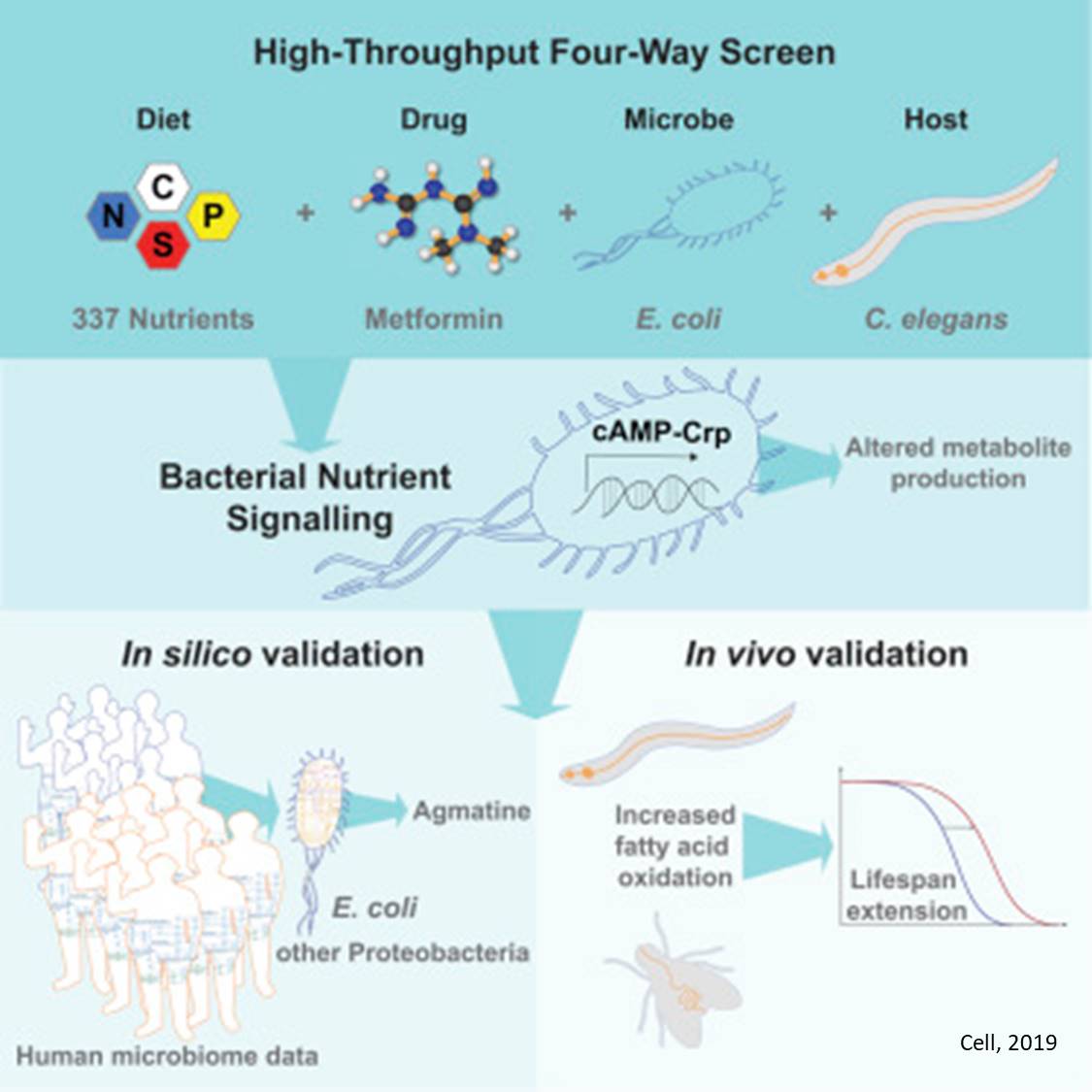 Research published in Cell has demonstrated that diet can alter the effectiveness of a type-2 diabetes drug via its action on gut bacteria.

Bacteria that reside in our gastrointestinal tract, referred to as the gut microbiome, produce numerous molecules capable of influencing health and disease. The function of the gut microbiome is known to be regulated by both diet and drugs such as the drug metformin, which is used to treat type-2 diabetes and has been shown to extend the lifespan of several organisms. However, understanding the complicated, multi-directional relationships between diet, drugs and the gut microbiome represents a considerable challenge. "Disentangling this network of interactions is of utmost importance since the specific mechanism of action of metformin is still unclear," says the author.

The team developed an innovative four-way high-throughput screening technique to better understand how diet, drugs and the gut microbiome interact to influence host physiology. They used the nematode worm C. elegans colonized with the human gut bacteria E. coli as a simplified host-microbiome model and exposed it to metformin in the presence of hundreds of different nutritional compounds.

They found that metformin treatment altered the metabolism and lifespan of the C. elegans host and that these effects could be either enhanced or suppressed by specific nutrients. Crucially, it was revealed that the gut bacteria played a key role in mediating this phenomenon.

The importance of the diet and gut bacteria explain why metformin was previously shown to have no effect on the lifespan of another commonly studied organism, the fruit fly. Another author says "As it turned out, the typical laboratory food of fruit flies is rich in sugars. After taking away the sugar we also saw positive effects of metformin in fruit flies colonized with E. coli."

Further analysis revealed that bacteria possess a sophisticated mechanism that enables them to coordinate nutritional and metformin signals and to rewire their own metabolism accordingly. As a result of this adaptation, the bacteria accumulate a metabolite called agmatine which was shown to be required for the positive effects of metformin on host health.

Researchers investigated whether the results found in C. elegans could also be observed in the more complex microbiota of humans. They analysed data related to the microbiome, nutrition and medication status of a large cohort of type-2 diabetic patients and healthy controls. "Intriguingly, we found that metformin treatment was strongly associated with an increased capacity for bacterial agmatine production," says the author. Importantly, they could reproduce their findings in several independent cohorts of type-2 diabetic patients across Europe. Moreover, the bacterial species found to be major producers of agmatine were those known to be increased in the gut microbiome of metformin-treated type-2 diabetic patients.

"Our results shed light on how the complex network of interactions between diet, microbiota and host impacts the efficacy of drugs," says the senior author. "With our high-throughput screening approach we now finally have a tool at hand that allows us to tackle this complexity". The findings of this study may help to inform dietary guidelines or the development of genetically engineered bacteria that could be used to enhance the beneficial effects of metformin. They may also provide a valuable insight into the evidence that suggests that metformin-treated type-2 diabetic patients are healthier and live longer than non-diabetic individuals. Why insulin producing cells in diabetes fail to divide?

Elimination of specific neurons outside the brain triggers obesity