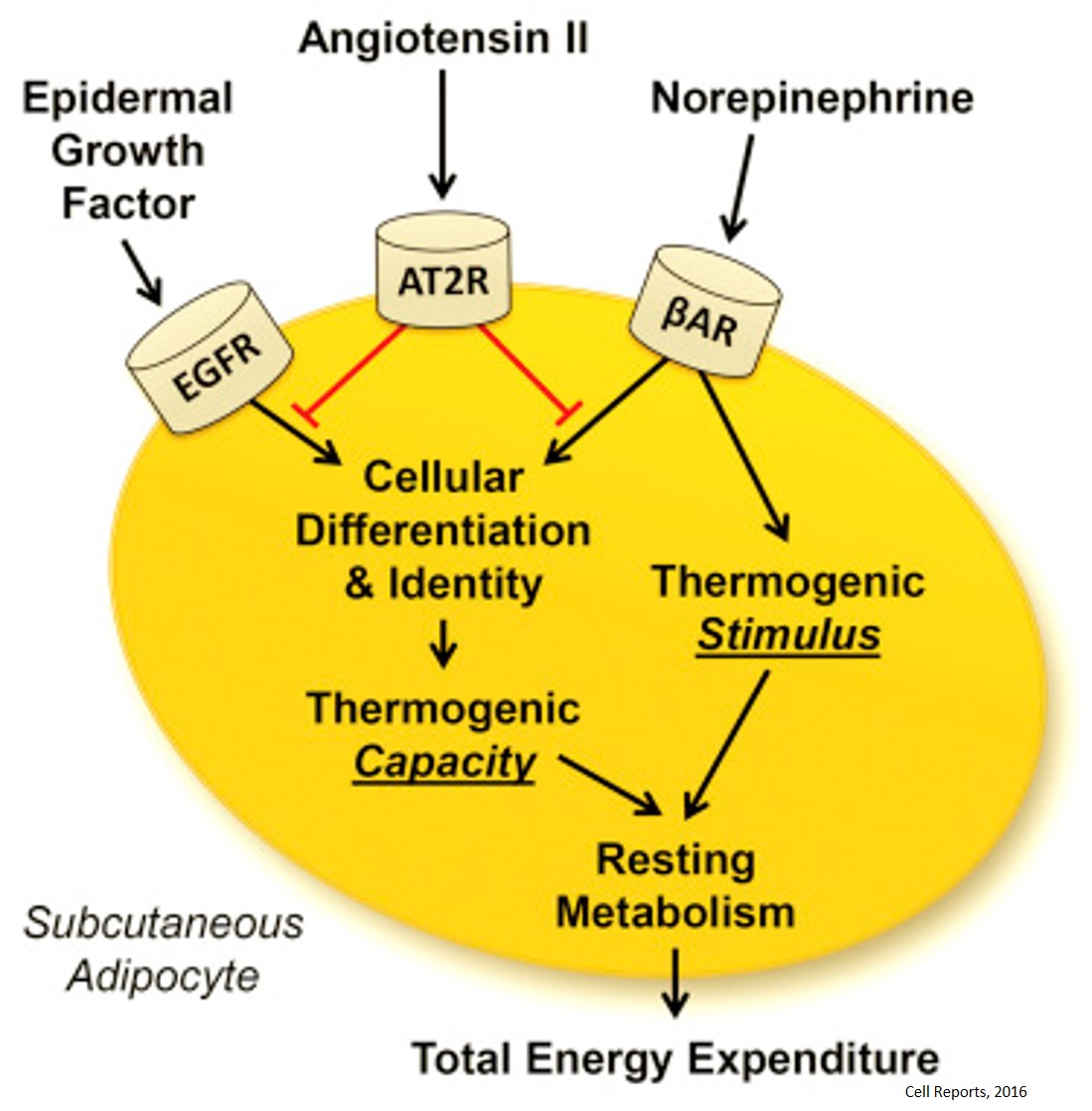 The renin-angiotensin system (RAS) controls blood pressure and is important for cardiovascular health. Many of the drugs used to treat hypertension (high blood pressure) and heart failure block or inhibit the RAS.

Increasing evidence suggests the RAS also plays a role in controlling energy balance and metabolic rate and therefore may be important in obesity. But, depending on where in the body this hormone system is operating, it can have opposing effects on weight gain.

"At a very simplistic level, you can think of the brain RAS as the gas pedal on metabolism and the peripheral (circulating) RAS as the brake, with angiotensin as the driver," explains senior author of a new study that shows how the peripheral RAS suppresses resting metabolism.

A more precise understanding of how the RAS acts in tissue-specific and receptor-specific ways to influence energy balance may ultimately be useful for developing new ways to treat obesity and the health problems associated with it.

Researchers studied genetically modified mice that have a hyper-activated brain RAS. These mice have increased resting metabolic rate and weight loss compared to control mice despite having similar levels of food intake and physical activity.

The researchers discovered that the increased resting metabolic rate in the mice is due to increased heat production (thermogenesis) in the pads of subcutaneous fat at the animals' hips. This type of fat is often considered "healthy." In contrast, the abdominal fat surrounding the internal organs, which is thought to be "unhealthy," did not show increased thermogenesis.

When the researchers activated AT2 receptors on the subcutaneous fat cells, the mice gained weight without changing feeding behavior, suggesting that activating AT2 receptors decreases resting metabolic rate. Activating AT2 mimics what would happen when the peripheral RAS is elevated.

Specifically, the team found that activating AT2 receptors reduces the amount of UCP1 protein made in the subcutaneous fat cells. This protein is important for non-shivering heat production. Reduced amounts of UCP1 interferes with the capacity of the fat cells to make heat.

"If the fat cell is the thermogenic tissue (generating heat by burning calories), you can either have a bigger engine or you can push the gas pedal harder to create a larger effect," author says. "Our study shows that angiotensin is modulating the size of the engine (amount of UCP1), not how hard the gas pedal is being pushed."

The team also looked for other signaling pathways affected by AT2 activation. Using gene expression profiling, they homed in on a set of genes involved in the epidermal growth factor (EGF) signaling pathway. EGF signaling is known to contribute to the differentiation of fat cells. The new findings suggest that angiotensin activating AT2 receptors in subcutaneous fat cells interferes with this process, although the precise molecular mechanism is not yet known.

"In multiple ways, activation of the AT2 receptor [by increasing the peripheral RAS] is interfering with the capacity of the cell to make heat," author says. "It is very consistent with the clinical observation that peripheral angiotensin goes up during obesity. This is probably at least one of the mechanisms by which that excess angiotensin is perpetuating obesity. Because it is telling the body to slow down its metabolism as the body gets bigger."