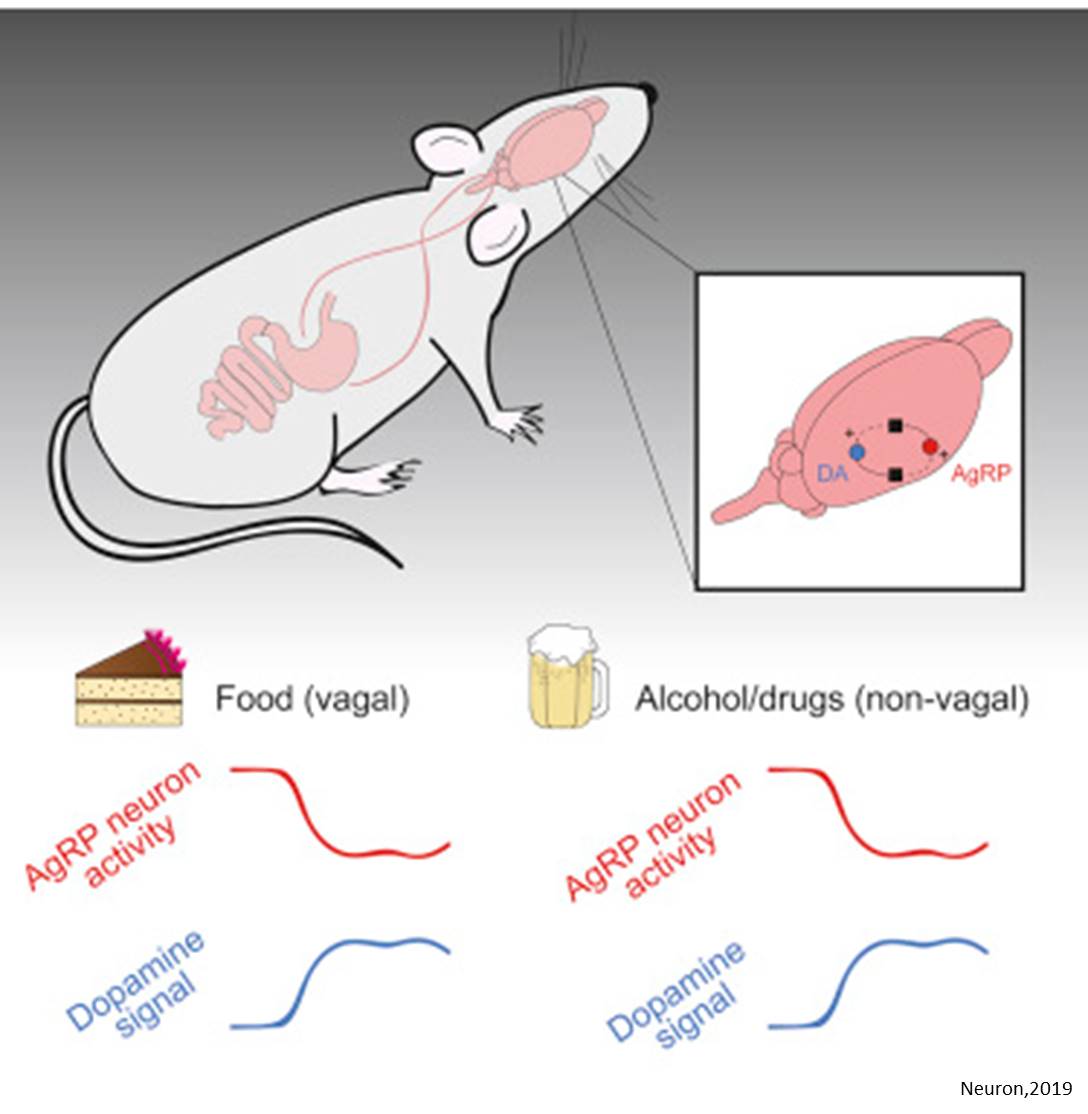 To some, a chocolate cake may spark a shot of pleasure typically associated with illicit drugs. A new study by biologists offers some insights into that link, revealing new information about how the brain responds to rewards such as food and drugs.

In the work, which appears in the journal Neuron, a team researchers show that, in mice, consuming food turns down the activity of neurons that signal hunger in the brain via a different pathway than alcohol and drugs, which can likewise act as appetite suppressants. Yet the research also reveals that the circuits that trigger the pleasurable release of dopamine are interconnected with the activity of hunger neurons, suggesting that drugs and alcohol can hijack not only the brain's reward circuits but also those responsible for signaling hunger, serving to create a behavior that reinforces itself.

"Signals of reward, whether it's food or drugs, access the brain through different pathways," says the senior author on the work. "But once they're in the brain, they engage an interconnected network between hypothalamic hunger neurons and reward neurons. It could be that drugs are reinforced not only by increasing a dopamine spike, but also by decreasing the activity of hunger neurons that make you feel bad."

With a greater understanding of these pathways, the researchers say their findings could inform the creation of more effective weight loss drugs or even addiction therapies.

The authors work has previously shown infusing any type of macronutrient (any calorie-containing food) into a mouse turned down the activity of AgRP neurons, which are responsible for the unpleasant feelings associated with hunger. The signal by which the stomach tells the brain it has consumed food travels along what is known as the vagal nerve.

Curious about whether alcohol, which is also caloric, could trigger the same effect, they found that it did so in mice, even when the vagal pathway was disrupted.

"If we cut that highway, highly caloric and rewarding foods like fat can no longer get that signal to the hunger neurons, but ethanol could," says another author.

The team next tried to do the same thing with cocaine, nicotine, and amphetamine, drugs that have been shown to have appetite suppressing activity, and found the same thing. It's the first time, the team says, that a non-nutrient has been shown to regulate AgRP neurons for a sustained period of time.

"What is exciting is that the results suggest there are pharmacological mechanisms out there that can be harnessed to reduce the activity of these neurons to alleviate hunger if someone was on a weight-loss diet," the author says.

Knowing that alcohol and drugs also trigger the release of dopamine, a neurotransmitter associated with a sensation of "reward" that is also implicated in addiction, the team observed that dopamine neuron activity increased in parallel to the decrease in AgRP neuron activity.

They went after that lead. Using a technique by which they could activate AgRP neurons without depriving an animal of food, the researchers explored how these hunger neurons influence dopamine signaling. In the absence of a food reward, they found little response in the dopamine neurons to activation of AgRP neurons. But when an animal with active AgRP was fed, the surge of dopamine was even higher than it would have been normally, without activated AgRP neurons. In other words, AgRP neurons made food more "rewarding" when the animals were hungry.

"We were surprised to find these AgRP neurons seemed to be signaling the dopamine neurons, but we couldn't detect that until the animal gets the reward," another author says. "This suggested that either an indirect or modulatory circuit mediates the interaction between hunger and reward neurons in the brain."

The same thing happened when the animal received a drug, such as nicotine.

Moving ahead, the research team is investigating the differences between the reward signals that come from alcohol and drugs versus food and unpacking the connection they have revealed between the dopamine neurons and AgRP neurons. Using sophisticated new technology, they'll also be studying individual neurons to see if the effects they've observed are due to the activity of small subpopulations of neurons in the brain.

If they're successful at identifying a new, druggable pathway that could target these linked circuits, the senior author says it would be welcome, as many currently available weight-loss drugs have unpleasant side effects such as nausea.

"It's hard to have somebody adhere to these drugs when they're feeling poorly," the seniorauthor says. "Our findings suggest there are multiple ways into the brain, and maybe by combining these strategies we can overcome these problems."

How stress may lead to cardiovascular disease & stroke