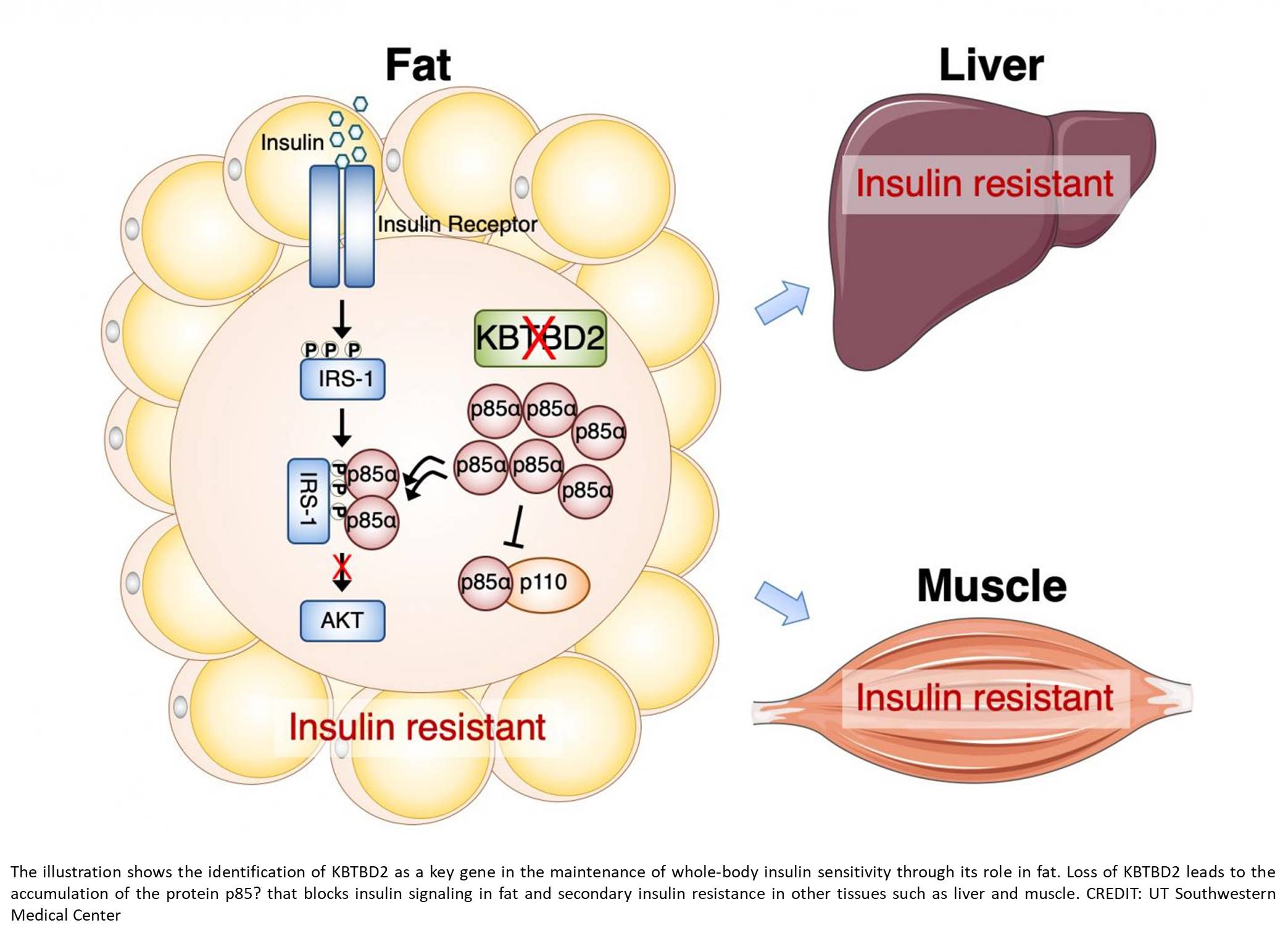 Deleting a key gene in mice in just their fat made tissues throughout these animals insulin resistant, in addition to other effects, a new study by researchers shows. The findings, reported in a recent issue of PNAS, could shed light on Type 2 diabetes and other insulin resistance disorders, which remain poorly understood despite decades of study.

In 2016, the authors reported a new mouse mutant that they named teeny, which resulted from inactivating a gene known as KBTBD2 that is widely expressed throughout the body in mice and humans. In addition to these animals' small size - about half that of normal "wild type" mice - the scientists quickly noticed that teeny mice produce a lot of urine, often a sign of diabetes.

Sure enough, tests showed that these animals had extremely high blood sugar, severe insulin resistance, and high insulin levels that peaked at 8 weeks of age and then gradually declined. They also had abnormally low amounts of body fat but had fatty livers. Transplanting teeny mice with fat tissue from normal mice largely resolved these problems, a sign that KBTBD2 in fat tissue in particular is key to each of them. However, say the authors, it was unclear whether these problems were also rooted in KBTBD2 activity in other insulin-responsive tissues, such as muscle and liver.

To answer this question, the researchers created different mouse mutants in which KBTBD2 was selectively inactivated in the animals' fat, muscle, or liver. Although each of these rodents grew to a normal size - suggesting that this gene acts through other pathways to regulate body growth - only those with KBTBD2 inactivated in fat cells had some other hallmark characteristics of teeny. These animals had extremely high insulin resistance, although only moderately high blood sugar levels. Although their blood insulin levels were also high, they didn't decline after 8 weeks of age as in teeny mice.

In addition to having abnormally low body fat like their teeny counterparts, those animals missing KBTBD2 in just their fat cells also had fatty livers, suggesting communication between fat and liver tissue.

Together, say the authors, the findings confirm that KBTBD2 plays a key role in regulating insulin sensitivity and a variety of other activities through its role in fat. However, they also raise important questions about what this gene does elsewhere in the body. KBTBD2 produces a protein that slices up another protein known as p85a, part of a larger protein complex that encourages insulin-sensitive cells to produce sugar transporters on their surfaces. Although it clearly performs this job when produced in fat cells, it doesn't seem to do this in other parts of the body even though it's widely expressed in other cell types. It is also unclear what part KBTBD2 plays in keeping teeny mice so small. The researchers plan to explore these questions in future studies.

They also plan to investigate the mechanisms behind why these animals have such extreme insulin resistance, which could have implications for Type 2 diabetes in humans, a disease marked by this characteristic.

"Although we know that insulin resistance is very rarely caused by mutations in the insulin receptor or genes responsible for making other proteins known to participate in glucose uptake, most of it is not understood," says Beutler, a Nobel Laurthe senior authoreate. "Getting a better grasp on the function of KBTBD2 could open a completely new window into how insulin sensitivity is regulated." Role of BRCA2 in DNA Repair Tumor RNA in platelets may diagnose and classify cancer