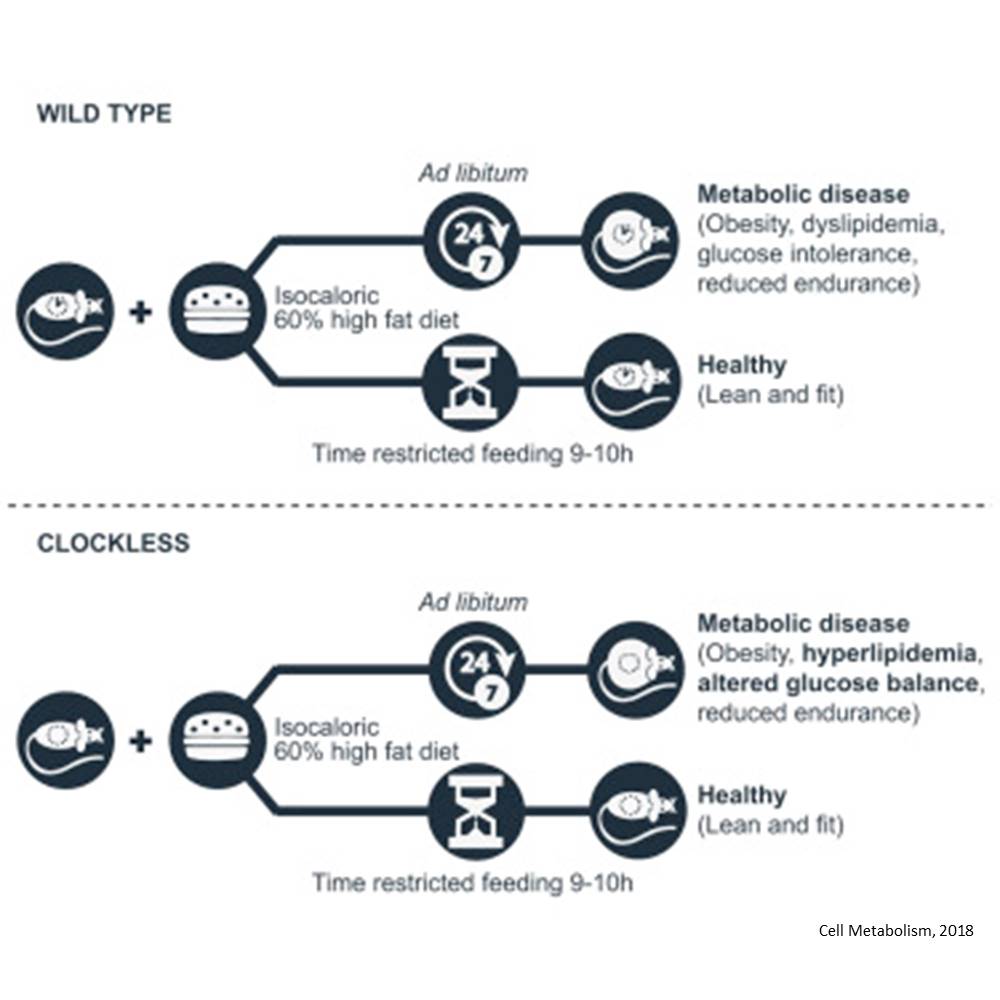 It turns out timing really is everything, at least when it comes to the diets of lab mice that have their circadian clocks disrupted. A new study published in Cell Metabolism is reporting that limiting the times when the animals eat can correct obesity and other metabolic problems that are normally seen in these mice, even when they're fed an unhealthy diet. The results suggest a previously unknown link between disruption of the clock and eating behavior.

"This was an unexpected finding," says the senior author of the study. "In the past, we have assumed that the circadian clock had a direct impact on maintaining a healthy metabolism, but this puts water on that fire. Our research suggests that the primary role of the clock is to produce daily eating-fasting rhythms, and that metabolic disease is only a consequence of disrupted eating behavior."

Previous studies have shown that having an intact circadian clock tells mice when to eat, at least when the mice have access to healthy food. Mice with defective clocks often have disrupted eating patterns if they are allowed to eat whenever they want. Many of these mutant mice eventually show signs of metabolic diseases, even when they are given only healthy food.

Other studies have shown that when normal mice are given free access to food that's high in fat and sugar, the bad diet overrides the circadian clock. This leads to the mice eating randomly and developing metabolic diseases. However, by restricting the timing of when the mice are allowed to eat to an 8- to 12-hour time window, researchers are able to prevent and reverse the health impacts of the unhealthy diet, as measured by things like high cholesterol and glucose levels and stamina on a treadmill. Such time-restricted feeding also led to robust rhythms in circadian clock components.

"This earlier research led to the theory that that a robustly cycling circadian clock function is necessary to prevent metabolic diseases," the senior author says. "With this new research, our question was, 'If the mice don't have an internal clock telling when to eat, can we externally instruct mice when to eat, and will it prevent metabolic diseases?' And the answer we found was that for the metabolic parameters we studied, restricting the timing of feeding prevented health deterioration, even in the absence of a normal clock."

The latest study looked at three different strains of mice that had their circadian clocks disrupted. This is done by knocking out certain genes that are known to regulate internal timing. Some of the mice had access to food whenever they wanted, but others had their eating restricted to a 9- to 10-hour time window. However, the total calorie intake was the same, whether the mice had disrupted clocks or not.

"This study showed us that the benefits of time-restricted feeding in maintaining body weight and reducing metabolic diseases are not dependent on an intact clock," says the first author of the study.

Transcriptome and metabolome analyses showed that TRF reduced the accumulation of hepatic lipids and enhanced cellular defenses against metabolic stress.

One of the next steps for the research is to look at how the clock influences the central nervous system and in doing so regulates the urge to eat. The investigators also plan to look at how the findings from the new study apply to humans. "We know that as people get older, they can start to lose their clocks," the senior author says. "These findings may suggest new ways to control compulsive eating in people whose clocks are disrupted."