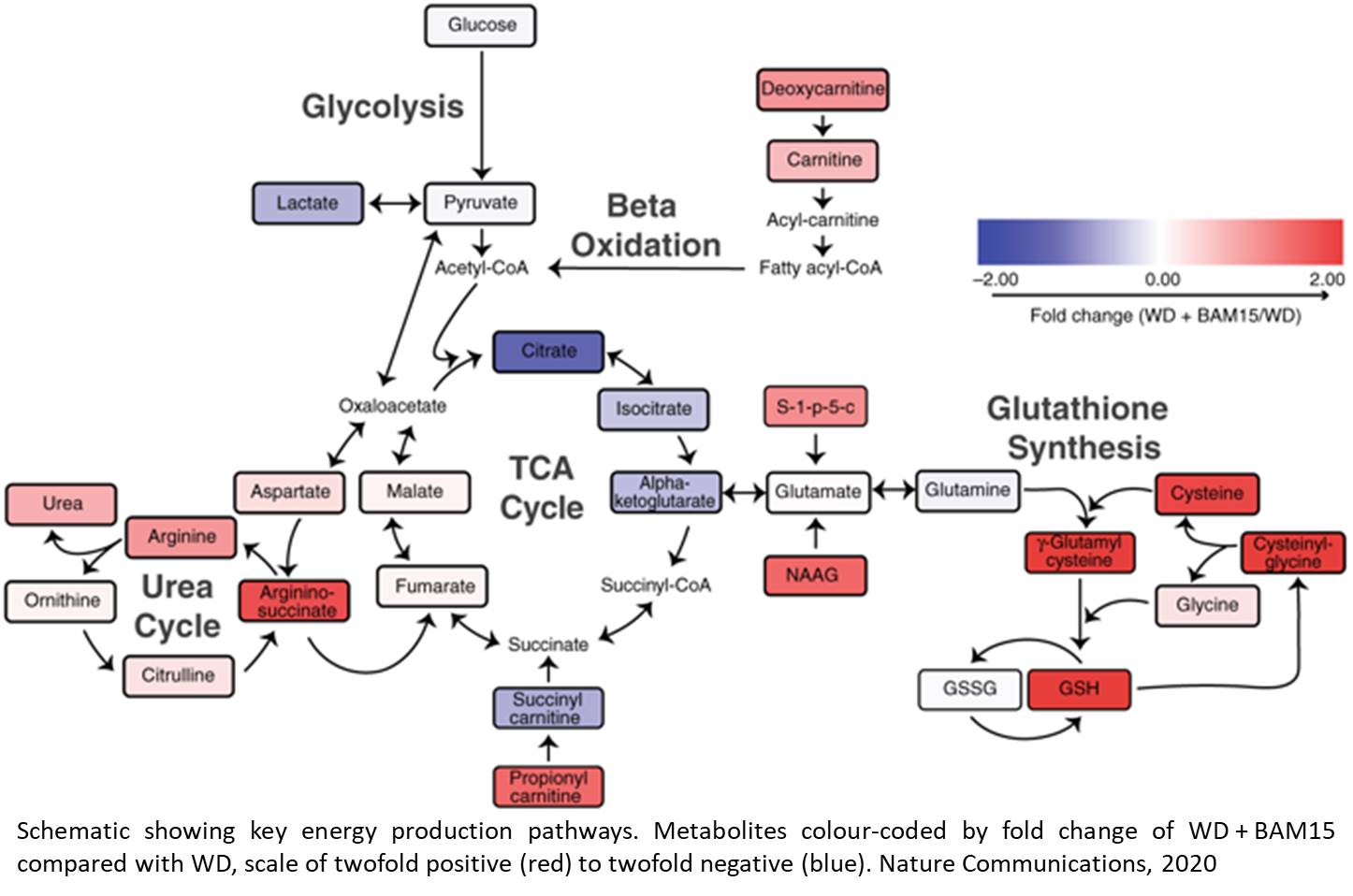 Obesity affects more than 40 percent of adults in the United States and 13 percent of the global population. With obesity comes a variety of other interconnected diseases including cardiovascular disease, diabetes, and fatty liver disease, which makes the disease one of the most difficult - and most crucial - to treat.

"Obesity is the biggest health problem in the United States. But, it is hard for people to lose weight and keep it off; being on a diet can be so difficult. So, a pharmacological approach, or a drug, could help out and would be beneficial for all of society," said the senior author.

The authors have recently identified a small mitochondrial uncoupler, named BAM15, that decreases the body fat mass of mice without affecting food intake and muscle mass or increasing body temperature. Additionally, the molecule decreases insulin resistance and has beneficial effects on oxidative stress and inflammation.

The mitochondria are commonly referred to as the powerhouses of the cell. The organelle generates ATP, a molecule that serves as the energy currency of the cell, which powers body movement and other biological processes that help our body to function properly.

In order to make ATP, nutrients need to be burned and a proton motive force (PMF) needs to be established within the mitochondria. The PMF is generated from a proton gradient, where there is a higher concentration of protons outside of the inner membrane and a lower concentration of protons in the matrix, or the space within the inner membrane. The cell creates ATP whenever protons pass through an enzyme called ATP synthase, which is embedded in the membrane. Hence, nutrient oxidation, or nutrient burning, is coupled to ATP synthesis.

"So anything that decreases the PMF has the potential to increase respiration. Mitochondrial uncouplers are small molecules that go to the mitochondria to help the cells respire more. Effectively, they change metabolism in the cell so that we burn more calories without doing any exercise," said the senior author.

Mitochondrial uncouplers transport protons into the matrix by bypassing ATP synthase, which throws off the PMF. To reestablish the gradient, protons must be exported out of the mitochondrial matrix. As a result, the cell begins to burn fuel at higher than necessary levels.

Knowing that these molecules can change a cell's metabolism, researchers wanted to be sure that the drug was reaching its desired targets and that it was, above all, safe. Through a series of mouse studies, the researchers found that BAM15 is neither toxic, even at high doses, nor does it affect the satiety center in the brain, which tells our body if we are hungry or full.

In the past, many anti-fat drugs would tell your body to stop eating. But as a result, patients would rebound and eat more. In the BAM15 mouse studies, animals ate the same amount as the control group - and they still lost fat mass.

But one issue arises concerning the half-life of BAM15. The half-life, or the length of time that a drug is still effective, is relatively short in the mouse model. For oral dosing in humans, the optimal half-life is much longer.

Even as BAM15 has some serious potential in mouse models, the drug won't necessarily be successful in humans - at least not this same exact molecule.

"We are essentially looking for roughly the same type of molecule, but it needs to stay in the body for longer to have an effect. We are tweaking the chemical structure of the compound. So far, we have made several hundred molecules related to this," said the senior author.