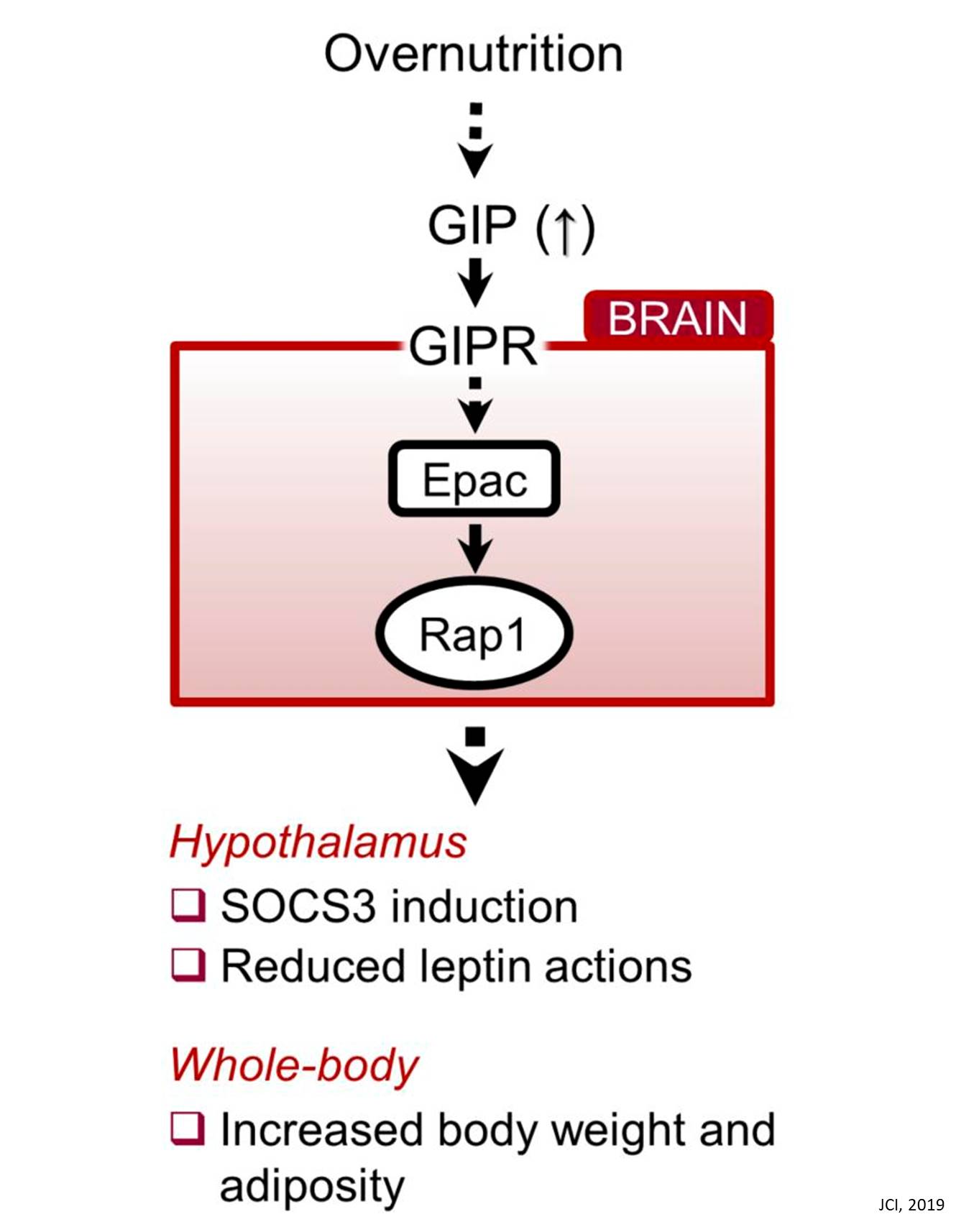 Eating extra servings typically shows up on the scale later, but how this happens has not been clear. A new study published in the Journal of Clinical Investigation by a multi-institutional team reveals a previously unknown gut-brain connection that helps explain how those extra servings lead to weight gain.

Mice consuming a high-fat diet show increased levels of gastric inhibitory polypeptide (GIP), a hormone produced in the gut that is involved in managing the body's energy balance. The study reports that the excess GIP travels through the blood to the brain where it inhibits the action of leptin, the satiety hormone; consequently, the animals continue eating and gain weight. Blocking the interaction of GIP with the brain restores leptin's ability to inhibit appetite and results in weight loss in mice.

"We have uncovered a new piece of the complex puzzle of how the body manages energy balance and affects weight," said the corresponding author.

Researchers know that leptin, a hormone produced by fat cells, is important in the control of body weight both in humans and mice. Leptin works by triggering in the brain the sensation of feeling full when we have eaten enough, and we stop eating. However, in obesity resulting from consuming a high-fat diet or overeating, the body stops responding to leptin signals - it does not feel full, and eating continues, leading to weight gain.

"We didn't know how a high-fat diet or overeating leads to leptin resistance," the seniorauthor said. "My colleagues and I started looking for what causes leptin resistance in the brain when we eat fatty foods. Using cultured brain slices in petri dishes we screened blood circulating factors for their ability to stop leptin actions. After several years of efforts, we discovered a connection between the gut hormone GIP and leptin."

GIP is one of the incretin hormones produced in the gut in response to eating and known for their ability to influence the body's energy management. To determine whether GIP was involved in leptin resistance, the authors first confirmed that the GIP receptor, the molecule on cells that binds to GIP and mediates its effects, is expressed in the brain.

Then the researchers evaluated the effect blocking the GIP receptor would have on obesity by infusing directly into the brain a monoclonal antibody developed that effectively prevents the GIP-GIP receptor interaction. This significantly reduced the body weight of high-fat-diet-fed obese mice.

"The animals ate less and also reduced their fat mass and blood glucose levels," the senior author said. "In contrast, normal chow-fed lean mice treated with the monoclonal antibody that blocks GIP-GIP receptor interaction neither reduced their food intake nor lost body weight or fat mass, indicating that the effects are specific to diet-induced obesity."

Further experiments showed that if the animals were genetically engineered to be leptin deficient, then the treatment with the specific monoclonal antibody did not reduce appetite and weight in obese mice, indicating that GIP in the brain acts through leptin signaling. In addition, the researchers identified intracellular mechanisms involved in GIP-mediated modulation of leptin activity.

"In summary, when eating a balanced diet, GIP levels do not increase and leptin works as expected, triggering in the brain the feeling of being full when the animal has eaten enough and the mice stop eating," the author said. "But, when the animals eat a high-fat diet and become obese, the levels of blood GIP increase. GIP flows into the hypothalamus where it inhibits leptin's action. Consequently, the animals do not feel full, overeat and gain weight. Blocking the interaction of GIP with the hypothalamus of obese mice restores leptin's ability to inhibit appetite and reduces body weight."

These data indicate that GIP and its receptor in the hypothalamus, a brain area that regulates appetite, are necessary and sufficient to elicit leptin resistance. This is a previously unrecognized role of GIP on obesity that plays directly into the brain.

Although more research is needed, the researchers speculate that these findings might one day be translated into weight loss strategies that restore the brain's ability to respond to leptin by inhibiting the anti-leptin effect of GIP. Reawakening sleeping HIV with a drug