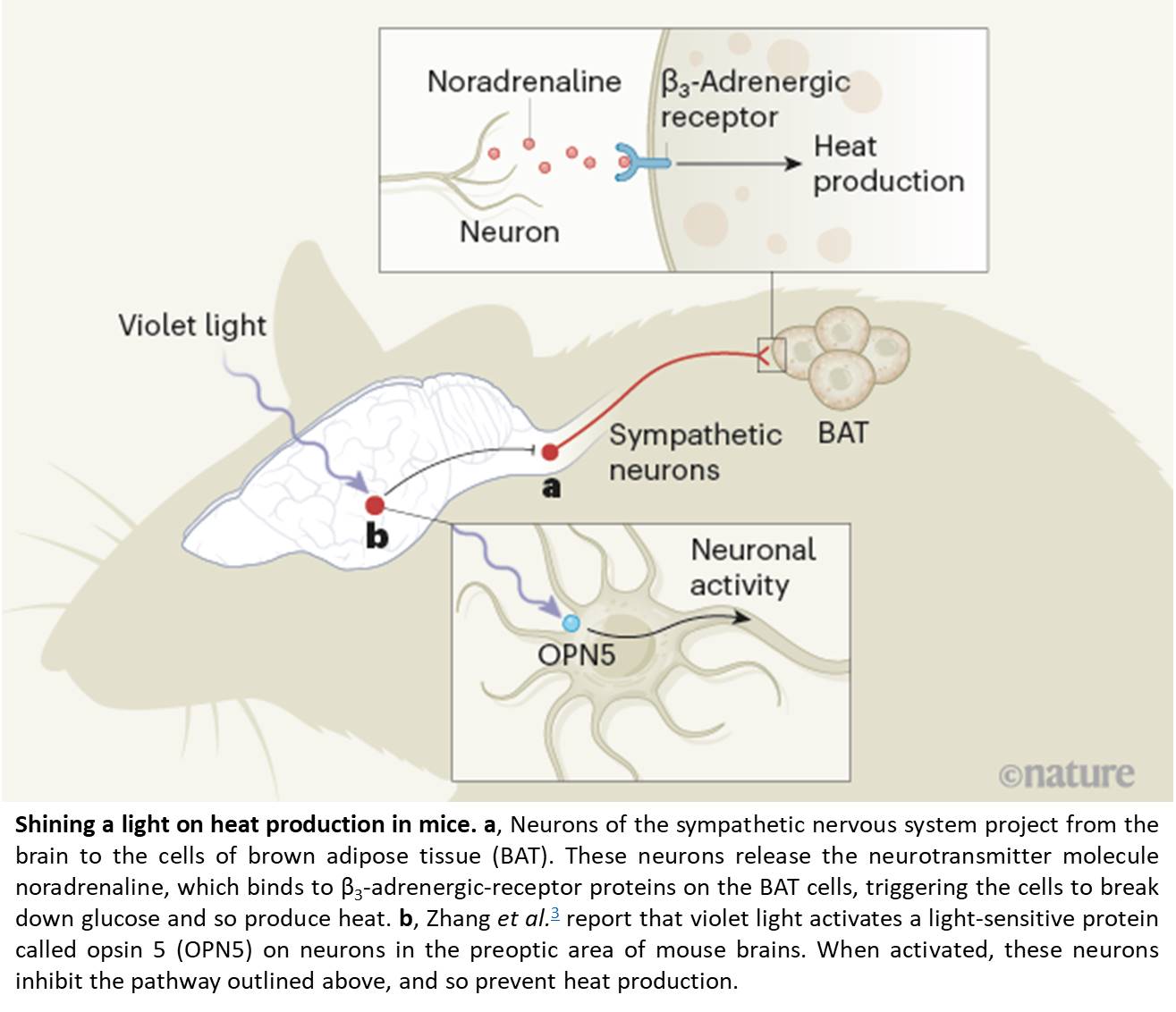 Light-sensing cells deep inside brain tissue play a larger role in human growth, development and health than even ardent fans of the outdoors would expect.

So consider this: sunlight doesn’t need to use your eyes to get inside your head.

While many people understand that invisible X-rays can pierce all the way through our bodies, it often surprises people to realize that photons from visible light also can zip right through our skulls to reach deep inside our brains.

Now, a multi-institutional team of scientists reports in the journal Nature that certain neurons inside our brains express a protein called Opsin 5 that can detect a specific wavelength of light from the sun. Those neurons, in turn, send signals that influence a number of our body functions—including our metabolism.

This discovery adds to our understanding of how sunlight plays a fundamental role in human health. Combined with lack of physical activity and poor food choices this may explain why so many more people in the modern world are becoming obese and battling metabolic disorders, the co-authors say.

“In this study, we provide evidence that the visual violet light found in normal sunlight, but not found in most indoor lighting, plays a direct role in regulating the fat-burning process in mice,” says the senior author.

In essence, too many of us are literally spending too much time inside, under the wrong kind of light.

“We also discovered where these light-sensing cells live—in the preoptic area of the hypothalamus,” says the study’s lead author. “And most importantly, we know from other studies that the same type of light-sensing cells that affects metabolism in mice are also present in human brains.”

The authors reveal that violet photons could penetrate into the mouse brain at levels sufficient to activate Opsin 5. The team’s discoveries have wide ranging implications that could affect how “light therapy” might be applied to metabolic disorders, how women live during pregnancy, how preterm infants are cared for in hospitals, and someday may have everyone switching to different light bulbs in their homes and offices.

Today’s finding, the author says, is one of three related discoveries published in the past year. Each revealed a piece of a large puzzle indicating that the body has ways of sensing light that have nothing to do with our eyes.

In concept, the idea isn’t new. Many scientists have documented how plants, insects, fish and other animals use sunlight in myriad ways, from drawing energy to survive, to setting their internal body clocks and timing their breeding seasons. But only in more recent years have scientists shown that mammals—including humans--also use “extraocular light detection.”

In October 2019, the authors made their first major contribution by reporting in Current Biology that Opsin 5 is expressed in the skin of mice. This opsin synchronizes the skin’s circadian clock to the light-dark cycle, independent of light input to the eyes or brain.

Then in January, the teamdemonstrated in Cell Reports that Opsin 3, a blue-sensitive opsin, is expressed in white fat cells and plays a vital role in balancing how fast the body burns its layers of white fat to maintain body temperature.

Now, the new study in Nature shows that Opsin 5 neurons in the brain play a master regulatory role in these metabolic processes.

All life forms evolved with a daily dose of sunlight. Extensive research has shown that most life forms use sunlight as a cue to regulate their metabolism and energy use. For example, in mammals, during the active part of their daily cycle, they have a higher body temperature, and this requires more energy. Opsin 5 in the hypothalamus is one component of a system that regulates these processes.

The study digs into the molecular and genetic details of how this light-driven metabolism machine works. The team studied multiple lines of genetically modified mice to track how they activated a fat-burning, body-warming process called thermogenesis when exposed to cold temperatures.

The team traced the brain’s ability to trigger this response to the gene for Opsin 5. Then they discovered that visible violet light at the 380 nm wavelength acted like an off-switch telling the mice to shut down the fat-burning process. The study also showed that violet light had this effect in both newborn mice and in adults.

What does this mean for human health? With the advent of the Industrial Age and the Digital Age, many more people are spending most of their time inside, exposed to various types of indoor lighting that nearly always lack the violet wavelengths found in outdoor sunlight.

"With the modernization of society, many of us are now exposed to artificial lighting that is neither appropriate in timing nor spectral composition. This is not how we evolved." the author says.

Confirming that our bodies need the right type of light to manage our metabolism raises several questions.

How do sunlight exposure levels affect preterm infants vs. full-term newborns vs. developing children vs. grown adults? If too much indoor time as a child increases risks of obesity and metabolic diseases such as type 2 diabetes, are those metabolic settings permanent? Or might light therapy change how our metabolisms work?

The author says the answers to such questions are not yet clear. And that’s why, the authors are leading a multimillion-dollar project to install a high-tech, spectrally tunable lighting system in the medical center’s new neonatal intensive care unit (NICU). The unit will be located in Cincinnati Children’s new Critical Care Building, now under construction.

The new lights can be programmed to produce the full spectrum of sunlight, or various wavelengths within it, and at various intensities. The system can mimic how the sun rises and sets, and how sunlight changes during the seasons.

The system is being custom-designed exclusively for Cincinnati Children’s, which already has applied for patents for crucial aspects of the system. Plans also call for a mobile version of the programmable lights, as this will allow researchers to explore settings beyond the NICU, the author says.

“We have a great deal more to learn about how light affects human development and influences energy metabolism and disease susceptibility” the atuhor says. “This may be the dawn of a new understanding of how people can live healthier lives in the modern world.”