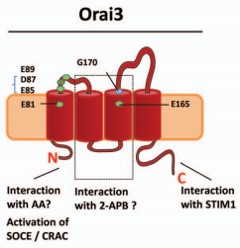 Researchers identify the gaseous signaling molecule hydrogen sulfide as an important regulator of the chronic, low-level inflammation caused by obesity that is associated with insulin resistance and the likelihood of developing type 2 diabetes.

Researchers found that, compared to ATMs from lean mice, ATMs from obese mice were depleted of the gaseous signaling molecule hydrogen sulfide (H2S) and that bacterial lipopolysaccharide also reduced the amount of H2S in macrophages.

Thus, the proinflammatory environment of adipose tissue is associated with the depletion of H2S in ATMs, which exacerbates inflammation by increasing SOCE in these cells.