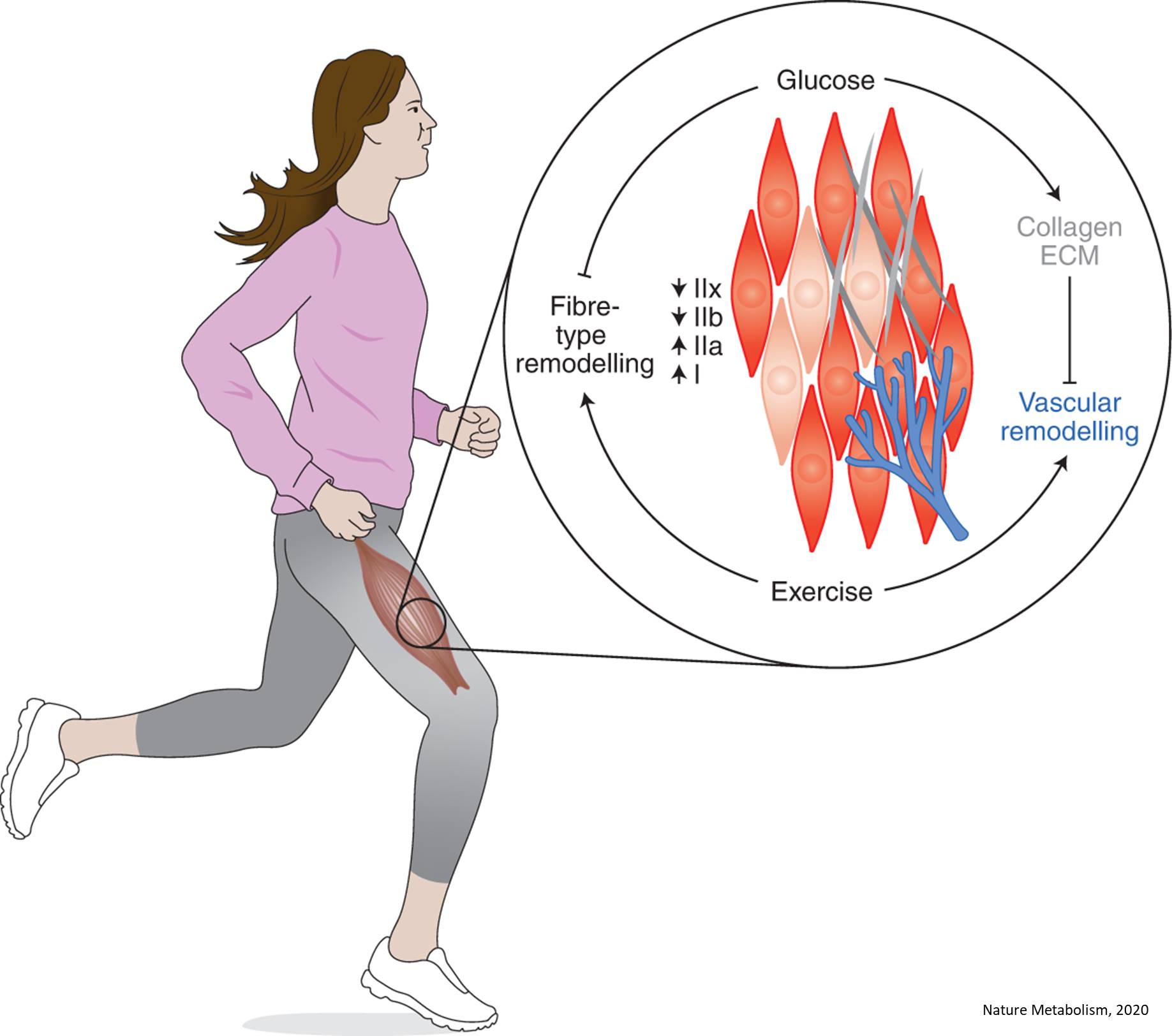 Every doctor recommends regular aerobic exercise, since greater aerobic fitness is important for achieving better overall health. But scientists now have discovered that some benefits of aerobic exercise may be dampened by higher-than-normal blood sugar levels, a condition known as hyperglycemia.

These diminished gains are seen in mouse models and humans with chronic hyperglycemia that is in the "prediabetes" range, says the senior author on a paper in Nature Metabolism that presents the work. The study also showed that this maladaptive trait is independent of obesity and insulin levels in the blood.

The team used two mouse models that reflect the two major causes of hyperglycemia in humans. One group of mice consumed a Western diet, high in sugar and saturated fat, which caused some weight gain in addition to hyperglycemia. The other group was modified to produce less insulin, which caused similar increases in blood sugar as the Western diet, even though the mice ate a diet lower in sugar and fat, and maintained normal body weight. Both groups were subjected to a training protocol in which they ran in wheels in their cages to boost their aerobic fitness.

In both hyperglycemic groups, animals ran around 500 kilometers over the course of the study but, on average, failed to improve their aerobic exercise capacity compared to mice with lower blood sugar levels, the author says.

Looking in more detail at skeletal muscle in these mice, the authors saw that the muscle was not adapting to the aerobic challenge as muscle normally would.

Muscle tissue can remodel itself, which is one reason why exercise becomes easier when we do it regularly, the author says. Over time, aerobic exercise such as running or swimming can alter muscle fibers to become more efficient at using oxygen during exercise. "We also grow new blood vessels to allow more oxygen to be delivered to the muscle, which helps to increase our aerobic fitness levels," she says.

The scientists propose that high levels of blood sugar may prevent muscle remodeling in part by modifying the "extracellular matrix" proteins in the space between the muscle cells, where blood vessels are formed.

Earlier work from the lab had demonstrated that a biological pathway known as the "JNK" signaling pathway can act as a kind of molecular switch to tell muscle cells to adapt to either aerobic or strength training. The scientists found that these JNK pathway signals were getting crossed in the hyperglycemic mice, by activating pathways associated with strength training, even though the mice were performing aerobic exercise. "As a result, the muscles of hyperglycemic animals have bigger fibers and fewer blood vessels, which is more typical of strength training, rather than aerobic training," the author says.

Following up on these animal findings in clinical tests with young adult volunteers, the scientists found that those who had higher blood sugar levels in response to ingesting glucose, a condition known as impaired glucose tolerance, showed the lowest aerobic exercise capacity. "Looking at how their muscles responded to a single bout of typical aerobic exercise, we also saw that those with the lowest glucose tolerance had the highest activation of the JNK signaling pathway, which blocks aerobic adaptations," the author says.

"The good news is, although our mouse models of hyperglycemia failed to improve aerobic fitness with training, they still achieved other important health benefits from the exercise including decreased fat mass and improved glucose metabolism," the author says. "So, regular aerobic exercise is still a key recommendation for maintaining health in people with or without hyperglycemia." It is important to note that people with hyperglycemia also can benefit from other forms of exercise, such as strength training, which is recommended for maintaining health, the author says.

"We often think of diet and exercise as separate ways to improve our health," the author says. "But our work shows that there is more interaction between these two lifestyle factors than what was previously known, and suggests that we may want to consider them together in order to maximize the health benefits of aerobic exercise."