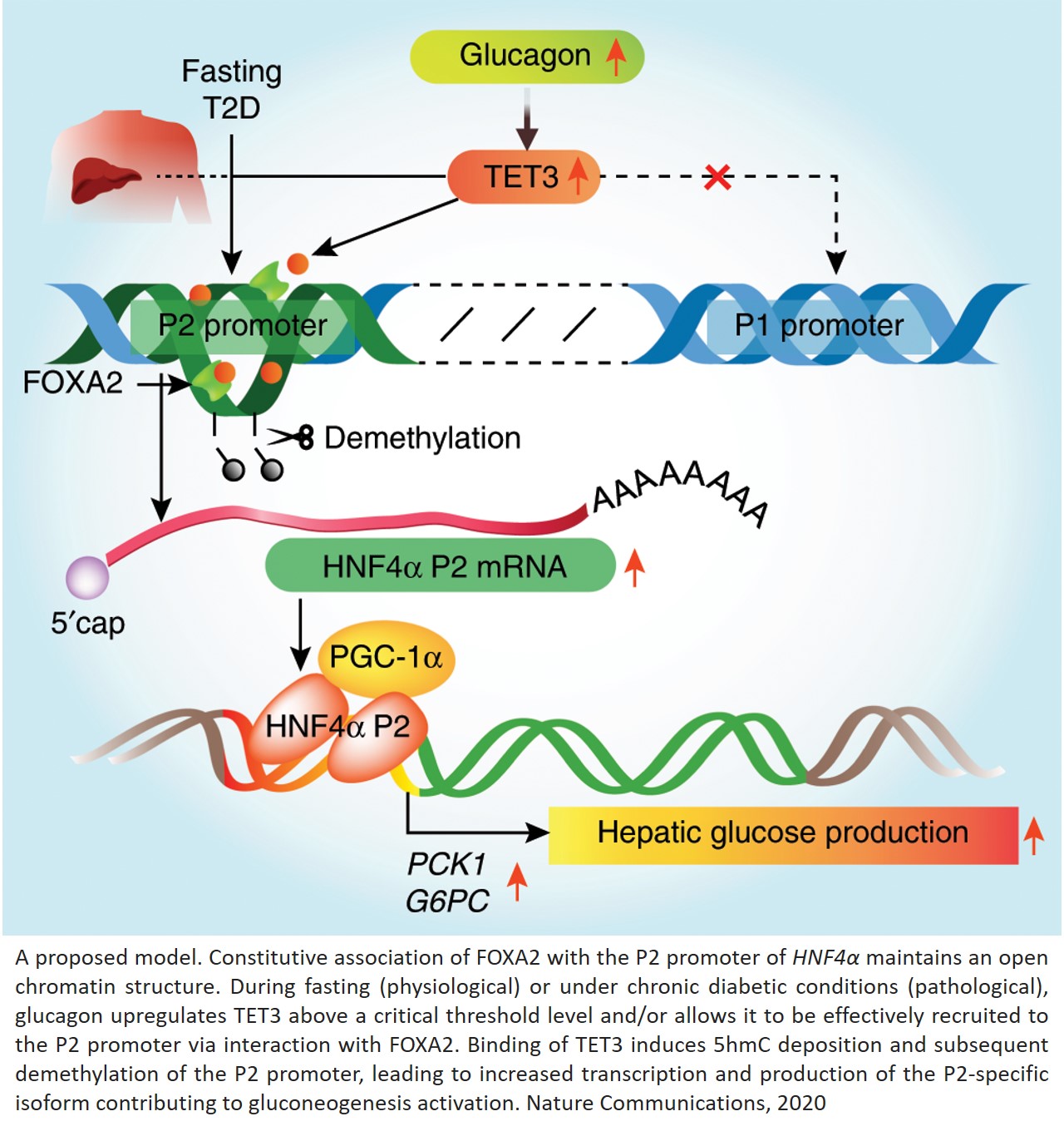 In a pair of related studies, a team of researchers has found a way to reverse type-2 diabetes and liver fibrosis in mice, and has shown that the underlying processes are conserved in humans. The studies published in Cell Reports and in the journal Nature Communications.

In the earlier study, researchers found an important connection between how the body responds to fasting and type-2 diabetes. Fasting "switches on" a process in the body in which two particular proteins, TET3 and HNF4 alpha increase in the liver, driving up production of blood glucose. In type-2 diabetes, this "switch" fails to turn off when fasting ends, as it would in a non-diabetic person.

Researchers hypothesized that if they could "knock down" the levels of these two proteins, they could stop diabetes from developing. The team injected mice with genetic material known as small interfering RNAs (siRNAs) packaged inside viruses that targeted TET3 or HNF4 alpha. They found that blood glucose and insulin dropped significantly -- effectively stopping diabetes in its tracks.

Authors show that TET3 is recruited to the P2 promoter by FOXA2, leading to promoter demethylation and increased transcription.

In the new Cell Reports study, researchers looked at how TET3 contributed to the development of fibrosis in the liver, and found that the protein was involved in fibrosis on multiple levels. Almost all fibrosis, regardless of the organ involved, starts from abnormal protein signaling, the author said.

The researchers discovered that TET3 plays a role in the fibrosis signaling pathway in three different locations -- and acts as an important regulator in fibrosis development. This means there are likely opportunities to develop drugs that inhibit TET3 to slow or reverse fibrosis, said co-author on both studies.

They also reveal a positive feedback loop between TGF-β1 and TET3 in both HSCs and hepatocytes. Furthermore, TET3 knockdown ameliorates liver fibrosis in mice.

Both diseases -- type-2 diabetes and fibrosis of the liver and other organs -- are common, but have few treatment options. Around 28 million people in the U.S. have type-2 diabetes, characterized by high blood sugar levels, a condition that can lead to many other health problems, including heart disease, stroke, and kidney failure.
Cirrhosis is one of the leading causes of death worldwide and is marked by liver fibrosis -- a buildup of scar tissue on the liver, said co-author.

Researchers noted that several drugs, such as metformin, are currently available to control blood sugar levels in patients with diabetes. But these have a range of unpleasant side effects, and patients can develop resistance to these drugs.And there is little medical relief for fibrosis sufferers.

The next step, she said, will be to identify where to best target TET3 and HNF4??and to develop the most effective siRNAs or small molecules to treat type-2 diabetes or fibrosis. Mechanism of stimulation of tumor growth by anemia drug

Decoding the microbial signature of aggressive form of breast cancer

A new strategy for cancer immunotherapy