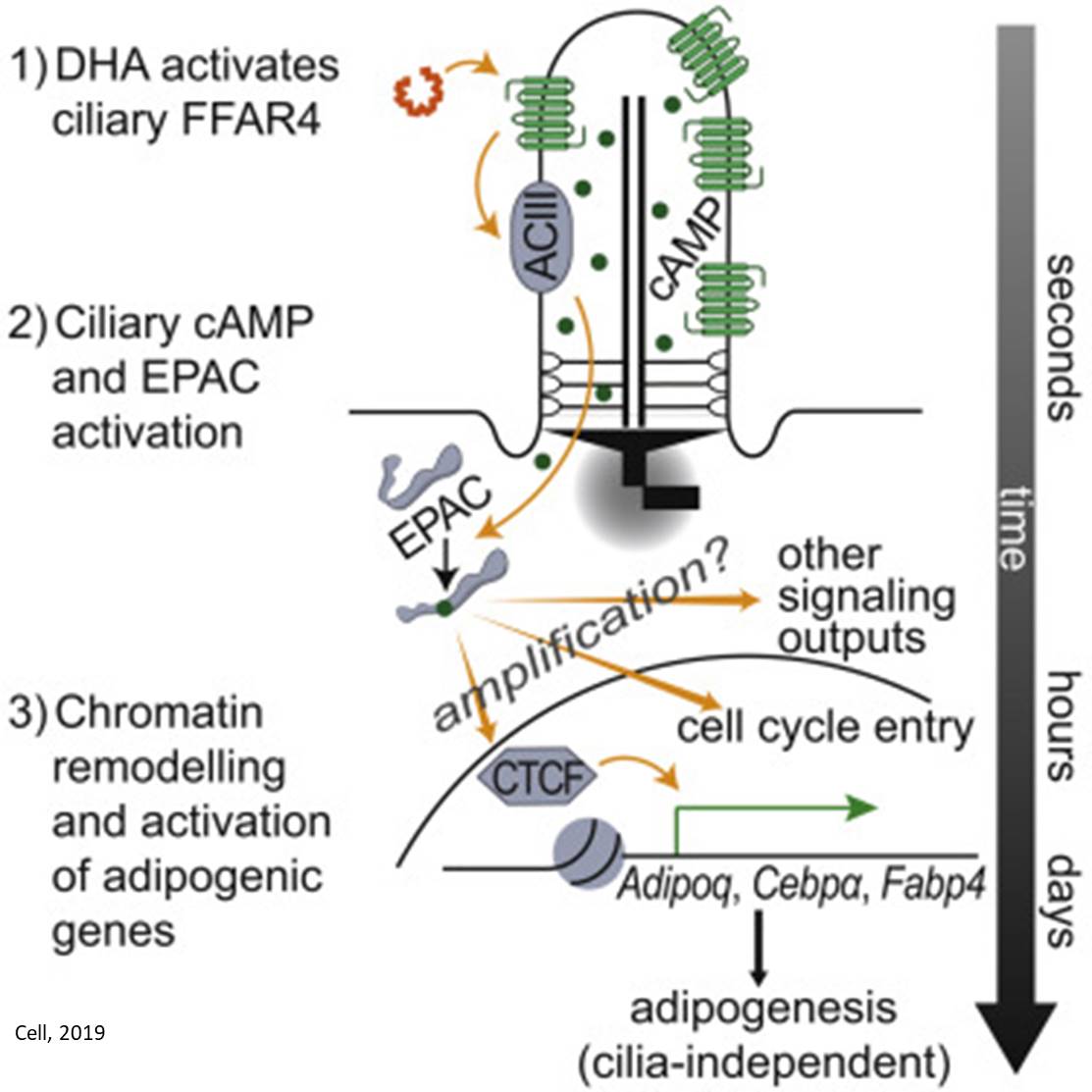 For years, researchers have known that defects in an ancient cellular antenna called the primary cilium are linked with obesity and insulin resistance. Now, researchers have discovered that the strange little cellular appendage is sensing omega-3 fatty acids in the diet, and that this signal is directly affecting how stem cells in fat tissue divide and turn into fat cells.

The finding represents a missing link between two worlds -- that of dietary science, and that of molecular and cellular biology. Dietary studies have long found that the consumption of omega-3 fatty acids, essential fatty acids common in fish and nuts, is associated with lower risk of heart disease, stroke, arthritis and even depression.

A paper describing the research is published in Cell. Researchers weren't looking for omega-3s when they started their research. They were only looking for the signaling molecule that fat stem cells were sensing. The molecule could have been anything: signaling pathways in cellular biology often involve esoteric molecules few people have heard of. They only knew that in rare diseases involving a defect in the primary cilium, people are always hungry, cannot stop eating and become obese and insulin resistant. So they were surprised when the signal turned out to be omega-3 fatty acids.

"When we saw that the cell was responding to omega-3 fatty acids, we realized that this had changed from just a molecular biology story to a story showing the molecular biology of how diet controls stem cells," the senior author said.

The cells sense the presence of omega-3 fatty acids through a tiny, hair-like appendage called the primary cilium, an ancient structure derived from the many flagella that algae cells first used almost 1 billion years ago to move through the oceans and sense their surroundings. Over time, as single-celled organisms evolved into multicellular creatures that first swam the oceans and then crawled onto land, cells ditched most of their flagella. But most cells kept a single flagellum, the primary cilium, to use as a highly sensitive antenna; it can pick up extremely subtle signals about the world outside the cell, helping to regulate the cell's function and fate.

The authors found that when omega-3 fatty acids bind to a receptor called FFAR4 on the cilia of fat stem cells, it prompts the fat stem cells to divide, leading to the creation of more fat cells. This provides the body with more fat cells with which to store energy, something that is healthier than storing too much fat in existing fat cells. "What you want is more, small fat cells rather than fewer, large fat cells," the senior author said. "A large fat cell is not a healthy fat cell. The center is farther away from an oxygen supply, it sends out bad signals and it can burst and release toxic contents." Large fat cells are associated with insulin resistance, diabetes and inflammation, the author added.

Furthermore, the researchers found that the presence of saturated fats or the blockage of ciliary signaling of the FFAR4 receptor does not lead to an increase in the creation of new fat cells from stem cells, but rather the addition of fat to existing cells. "Rather than looking how diet correlates with health, we have gone from molecule to receptor to cell to document why 'healthy fats' are beneficial and 'unhealthy fats' contribute to disease," the lead author said. "We have provided a mechanism explaining why omega-3 fatty acids are critical for maintaining healthy fat balance and saturated fats should be limited."

The research also may change scientific understanding of how the body manages fat storage in a healthy person. "Researchers often talk about the movement of fat in and out of cells, but what we are showing is the importance of stem cell activity in creating new fat cells as being critical for the body's energy management," said a co-author of the paper.