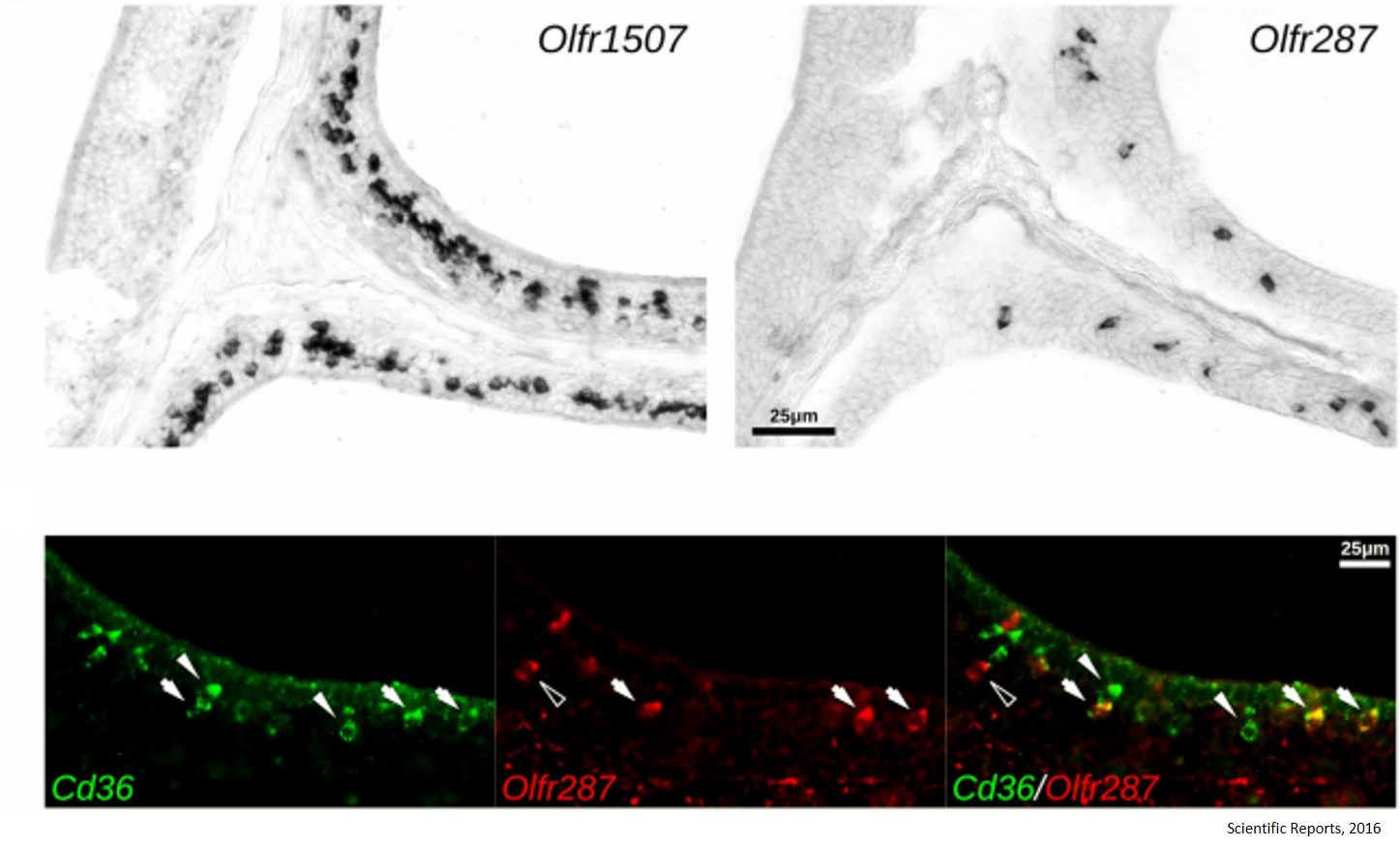 A paper by Brazilian researchers published in the journal Scientific Reports describes a study showing that a subgroup of olfactory neurons in the nasal cavity express a cellular receptor specializing in the transport of lipid molecules.

Known as CD36, this membrane receptor is usually intensely expressed in fatty tissue, where it regulates lipid metabolism. It also plays a well-known role in the immune system, where it is required for phagocytosis of potentially harmful molecules by macrophages. Previous research has linked the presence of CD36 in the tongues of mammals with a preference for high-fat food.

"The existence of CD36 in nasal sensory neurons is a novel discovery and appears to point to olfactory detection of lipids in mammals. Like the tongue, this may be linked to a preference for fatty food," said the senior author.

Another possibility is that this receptor is linked to perception of smells by individuals of the same species and to social interactions, since there is evidence of the existence of lipidic pheromones.

The discovery was made in a study of the nasal mucous membrane in mice. The researchers now plan to confirm whether the lipid molecule receptor is also present in human olfactory epithelium. According to the author, the initial aim of the investigation was to understand the role played in neurons by CD36 and other molecules associated with innate immune response.

To investigate the function of these olfactory neurons that express CD36, they performed experiments with two groups of mice, one wild-type group (not genetically modified) and another group comprising mice of the same lineage that did not express CD36.

The researchers measured the times taken by each of the groups to explore a piece of paper soaked in saline solution and another piece of paper scented with a mixture of fatty acids. The wild-type animals (with CD36) spent far more time exploring the lipid-scented paper than the saline-soaked paper, while in the group without CD36 the difference was not significant.

"On its own, of course, this doesn't prove that CD36 receptors in these sensory neurons are responsible for olfactory detection of lipids and the preference for this almost imperceptible smell, but it's strong evidence in that direction," author said. "In addition, we showed that CD36 concentrates in the ciliary layer of the olfactory epithelium, the portion responsible for odorant detection. However, more evidence was required for the purposes of scientific journal peer review."

Researchers were able to demonstrate a correlation between CD36 expression and expression of a gene that encodes an olfactory receptor called Olfr287.
"So, we can state that there is indeed a subpopulation of neurons which express CD36 and Olfr287 concomitantly. This is no accident. It must have a function, and more research is required to discover what that function is," auhtor said.

Among the research group's future plans is a project to explore in greater detail the functioning of the Olfr287 receptor in order to discover how it is activated and what happens to it in the absence of CD36, for example. Diabetes drug could be used to combat fatty liver disease