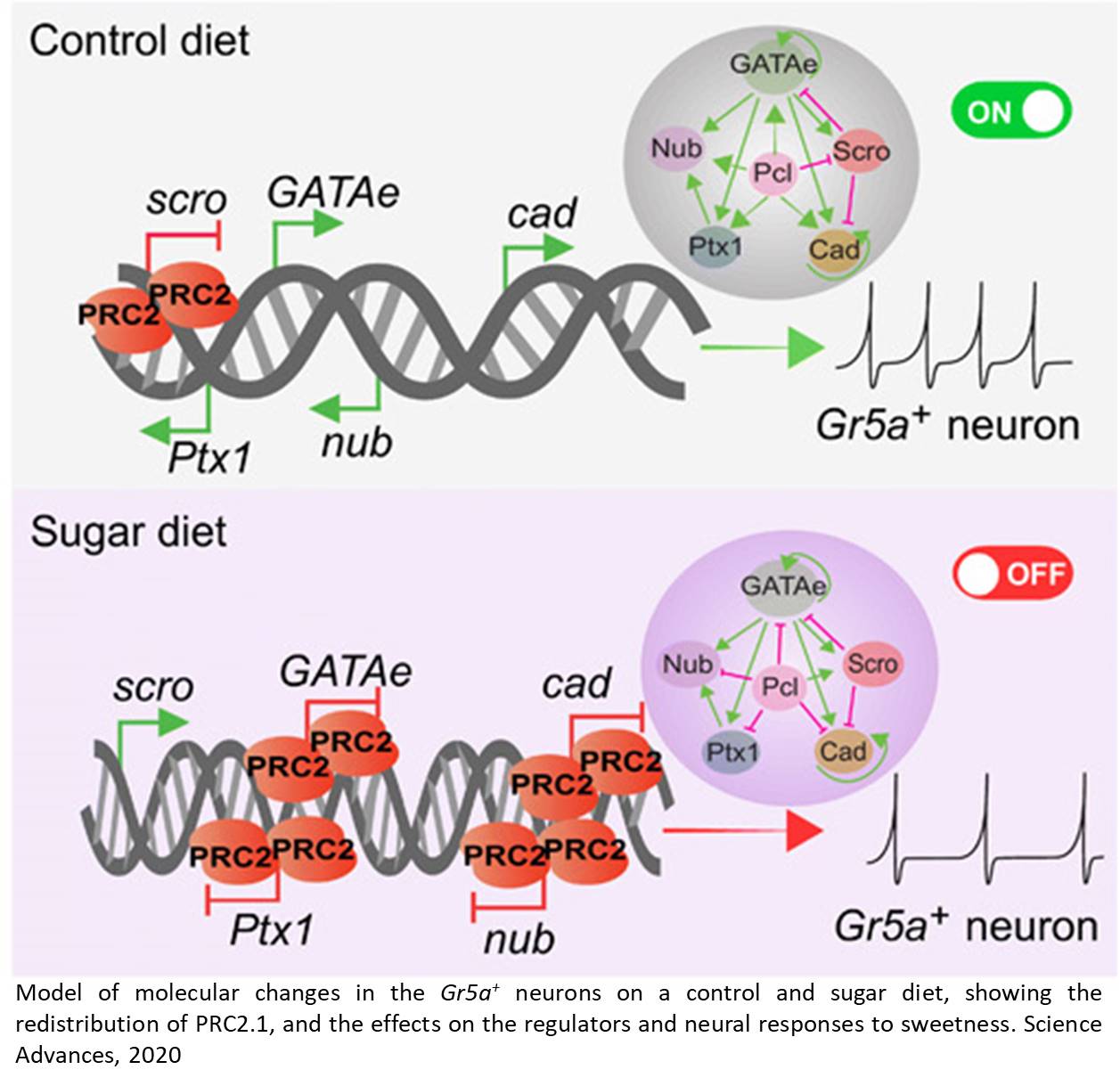 A high-sugar diet reprograms the taste cells in fruit flies, dulling their sensitivity to sugar and leaving a "molecular memory" on their tongues, according to a new study.

Examining fruit flies, researchers found that high-sugar diets completely remodeled the flies' taste cells, leaving a molecular memory that lasts even when the flies were switched back to healthy diets. The molecular memory of the previous diet could lock animals into a pattern of unhealthy eating behavior. Their findings were published in Science Advances.

"When we eat food, it just takes a few bites for it to go away. We don't really think of it being something that could have this kind of lasting effect on our brain," said the senior author of the study. "But when the animals were moved to a different food environment, such as a healthy diet, they kept the molecular memory of the high-sugar diet in their cells. This shows the past food environment may influence the future behaviors of the animals."

Specifically, the researchers found that a high-sugar diet reprogrammed cells located in the mouths of fruit flies that sense sweetness, leading them to malfunction. This reprogramming involved an epigenetic regulator called Polycomb Repressive Complex 2.1, or PRC2. Epigenetic regulators are groups of enzymes that can affect how much and whether a gene is expressed by remodeling a material called chromatin. Chromatin comprises the material of chromosomes in everything from plants to humans.

In this case, the research team found the way PRC2 is distributed in the chromatin of neurons that sense sweet taste changes when flies are on a high-sugar diet. They found that this change activates some genes and silences others--specifically, the genes that are involved in detecting sweetness.

"So, through this very specific pathway, a high-sugar diet can silence genes required for sweet taste," said the lead author. "Even more interesting is that the effect of gene silencing is actually persistent so that even when the animals are removed from the high-sugar diet, the genes associated with taste are still changed and the animals still experience sweet taste defects."

Fruit flies only have about 60 sweet taste cells in their mouthparts. After purifying these taste cells from flies that had been on a controlled diet and from flies that had been on a high-sugar diet for one week, the researchers used two techniques to identify the silenced genes. One of these techniques involves isolating the ribosomes--particles that bind RNA to synthesize proteins--from these 60 cells and sequencing the messenger RNAs associated with them to determine whether a gene has been silenced. Messenger RNA is a form of RNA that carries genetic instructions from DNA to ribosomes.

By the seventh day of a high-sugar diet, the authors found that more than 80% of the sweet taste genes were silenced. This was because the PRC2 changed its binding on the DNA, and by doing so, switched the "program/software" that the taste cells ran. The new program did not make them respond as well to sweetness and almost reprogrammed their identity as sweet taste cells.

"We need to think of food not just as something that we eat and then its effects pass, but actually as an experience that could impact our future behaviors and food choices, similar to early life trauma that leaves a lasting effect on the adult brain," the author said.

To confirm that PRC2 was behind the gene silencing, the researchers mutated the complex to see if they could restore normal gene expression in the cells. By mutating the complex, they found that the fly did not experience a decline in ability to sense sweet tastes.

Interestingly, the flies that could still taste sugar were also able to remain lean. The flies that did experience a decline in ability to sense sweet tastes became obese. The reason why this occurs lies in some of the lab's previous research about how sugar interferes with satiety signals. When flies' ability to taste sugar is dulled, they eat more and more sugar in order to reach the same levels of satiety. When their ability to taste sugar is not dulled, they end their eating sessions earlier.

"Instead of eating a whole sleeve of cookies, they were able to stop at two," the senior author said. "It really reinforces the idea that these changes in taste are important to our ability to control food choice and food intake."