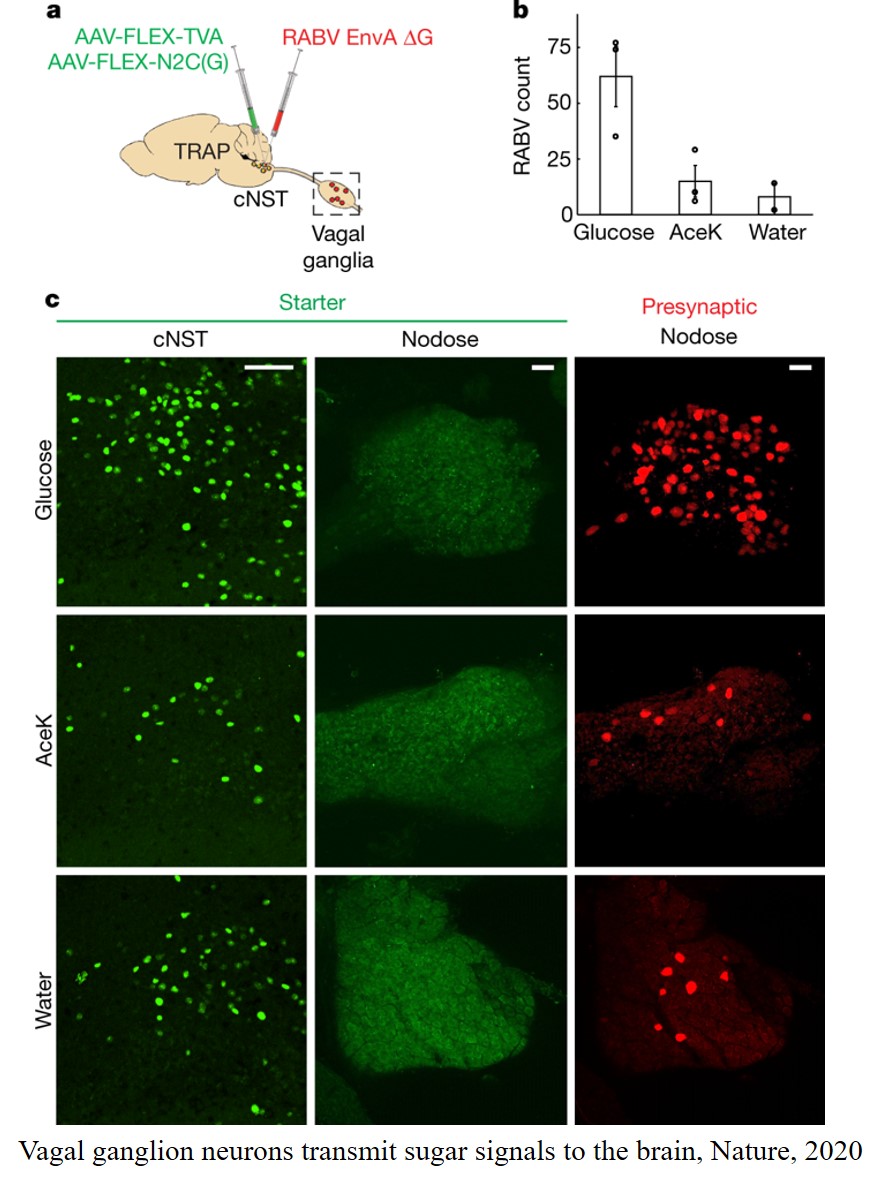 Artificial sweeteners have never fully succeeded in impersonating sugar. Now, a new study in mice has identified a brain mechanism that may explain why.

In a scientific first, researchers have shown that the brain responds not only when sugar touches the tongue but also when it enters the gut. Their discovery of this specialized gut-brain circuit offers new insight into the way the brain and body evolved to seek out sugar. And because artificial sweeteners do not activate this circuit, the study also offers compelling evidence as to why these sweeteners are never quite as satisfying as the real thing.

The findings, reported in Nature, stand to have a substantial positive impact on public health. Excess sugar intake has been linked to obesity-related conditions such as diabetes, which affects more than 500 million people worldwide. By laying the foundation for new ways to modify this gut-brain circuit, this research offers promising new paths to reducing sugar overconsumption.

“When we drink diet soda, or use sweetener in coffee, it may taste similar but our brains can tell the difference,” said the paper’s co-first author. “The discovery of this specialized gut-brain circuit that responds to sugar — and sugar alone — could pave the way for sweeteners that don’t just trick our tongue but also our brain.”

When the sweet taste receptors are deleted in mice, which should have eliminated the animals’ desire for anything sweet, the animals still display a preference for sugar. The research team’s goal was to was to find out why and how, and to uncover the neural basis for our insatiable desire for sugar.

The team focused on a brain area called the caudal nucleus of the solitary tract, or cNST. The cNST is tucked inside the brain stem, the most primitive area of the brain.

“We discovered that the cNST lit up with activity when we bypassed the sweet taste receptors on the animals’ tongues and delivered sugar directly to the gut,” said the paper’s other co-first author. “Something was transmitting a signal, indicating the presence of sugar, from the gut to the brain.”

The research team then turned their attention to the vagus nerve, a well-known conduit between the brain and the body’s internal organs.

In a series of experiments in mice, the scientists developed techniques to monitor the real-time activity of cells in the vagus nerve. The team observed how these cells’ activity changed when sugar was delivered into the animals’ gut.

“By recording brain-cell activity in the vagus nerve, we pinpointed a cluster of cells in the vagus nerve that respond to sugar,” said the author. “We saw, for the first time, sugar-sensing via this direct pathway from the gut to the brain.”

Further experiments revealed the circuit in greater detail. Inhibiting a specific sugar-transporting protein in the gut eliminated the animals’ neural response to sugar, showing that this protein, called SGLT-1, is a key sensor transmitting the presence of sugar from the gut to the brain via what is known as the gut-brain axis.

In a key prediction from this study, the team then showed that silencing this gut-brain circuit completely abolishes the animals’ craving and preference for sugar, demonstrating how controlling the function of this circuit can dramatically impact the animal’s desire for sugar. In one of their final set of experiments, the researchers also switched on the brain cells that normally respond to sugar signals from the gut. This time, however, they activated these cells every time the animal consumed a sugar-free Kool-Aid drink, in essence hijacking this circuit.  Remarkably, says the senior author, the animals acted as if they were getting real sugar. In effect, fooling the brain into responding as if they were consuming sugar.

Taken together, these findings demonstrate the existence of two complementary, yet independent, systems for sensing energy-rich sugar, one getting input from the tongue, the other from the gut.

“These findings could spur the development of more effective strategies to meaningfully curtail our unquenchable drive for sugar, from modulating various components of this circuit to potentially sugar substitutes that more closely mimic the way sugar acts on the brain,” said the co-first author.

Going forward, the team plans to link the gut-brain axis to other brain circuits, including those involved in reward, feeding, and emotions. Re-wiring of the brain in obesity