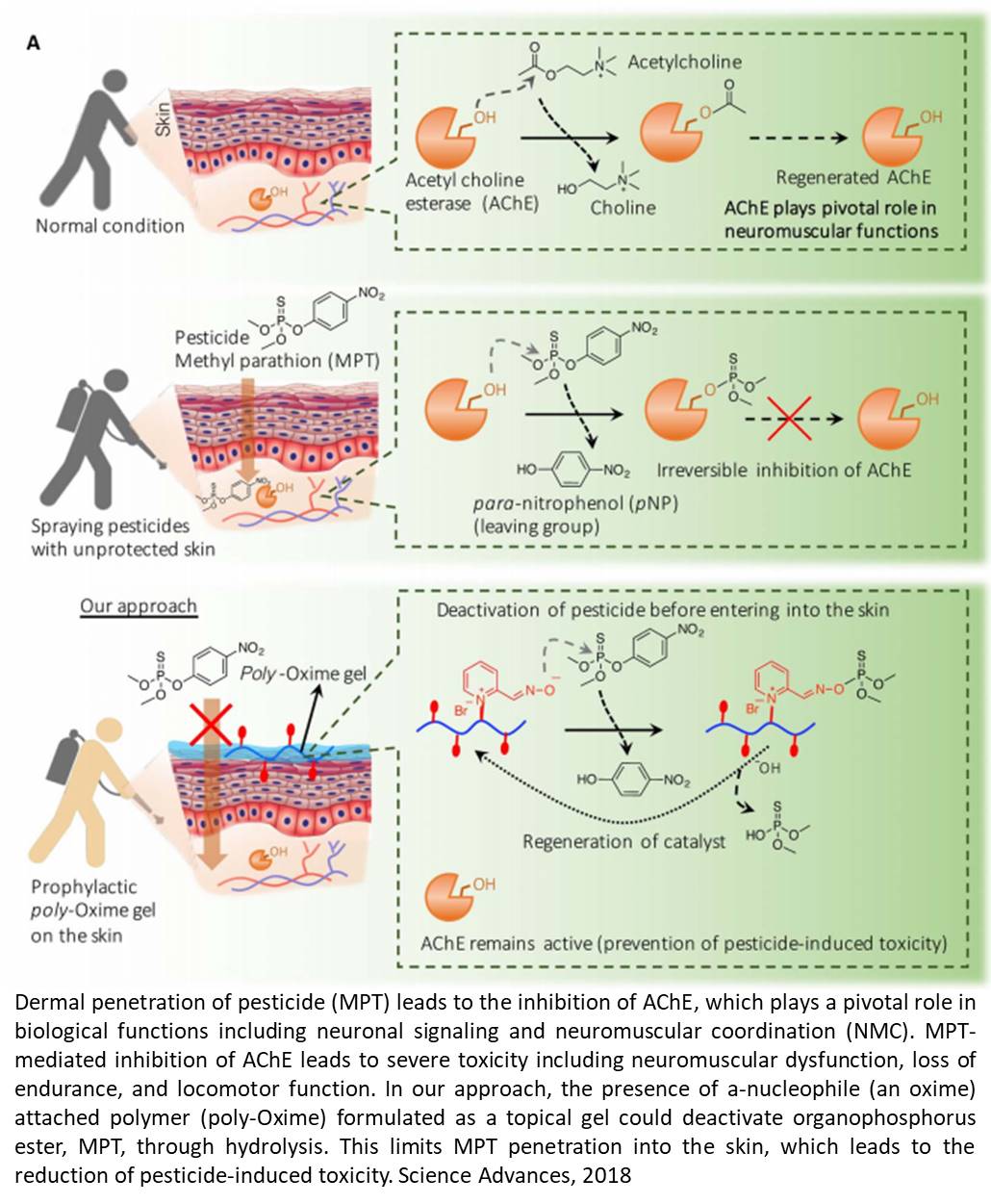 Farmers are exposed to toxic pesticides, through skin contact and inhalation, during the spraying of pesticides. This is a severe health hazard. In the last year, in India, spraying is thought to have led to over 40 deaths, 25 cases of lost vision, and over 1000 hospitalizations. This is just one example demonstrating the severity of this unmet need. Despite this need, at present, no single technology exists to chemically deactivate pesticides on the skin to protect farmers from pesticide exposure.

Organophosphates, are a major class of pesticides with high potential to enter the body through the skin and cause severe neuro-toxicity over persistent exposure. Organophosphates, disrupt chemical communication between two neurons (cells responsible for carrying brain signals), through inhibition of the Acetylcholinesterase enzyme, and are implicated in learning deficits, suffocation, paralysis, muscle weakness, loss of endurance and in some instances -death.

Now, a team of researchers has developed a nucleophilic polymer, which formulated into a topical gel can be applied on the skin before spraying of pesticides. This gel can deactivate pesticides on the skin through nucleophilic mediated hydrolysis, thereby preventing pesticide-induced toxicity and lethality. These findings are reported in the journal Science Advances.

"We identified this as a severe clinical gap with a massive impact on the health of 263 million farmers in India," said the Research Investigator. "An active nucleophile in this skin-compatible gel attacks the pesticide molecule and breaks it into non-toxic products. The pesticide is detoxified even before it reaches the skin surface" the author added.

In pre-clinical studies conducted by the researchers, a one-time, topical application of active gel prevented a lethal dose of pesticide-induced toxicity such as loss of neuronal communication, loss of muscle control, loss of endurance, and death. The gel showed a broad-spectrum activity, and it could detoxify the majority of commonly used pesticides in India.

"The real challenge was to design an ideal nucleophile which can rapidly hydrolyze organophosphates and regenerate to elicit catalytic activity, yet does not cause skin irritation," says a co-author in the paper.

The nucleophilic catalytic gel is active against a wide range of pesticides, insecticides, and fungicides including commonly used commercial pesticides in India. For example, in the total pesticide/insecticide market, approximately 70, 20 and 10% of them are organophosphates, carbamates, and pyrethrins, respectively. This new gel can neutralize all of them. Additionally, the gel could detoxify majority of commercially available formulations to give quantitative protection for farmers.

The team is in the process of setting up a start-up company based on this technology, and aiming to conduct a human pilot study shortly, which will be a step closer to the commercialization of this technology. Their mission is to protect every single farmer and farm workers in India from pesticide-induced toxicity and lethality. Together, this technology could have a broad social impact in India and developing countries.