How do tips of plants stay virus-free? 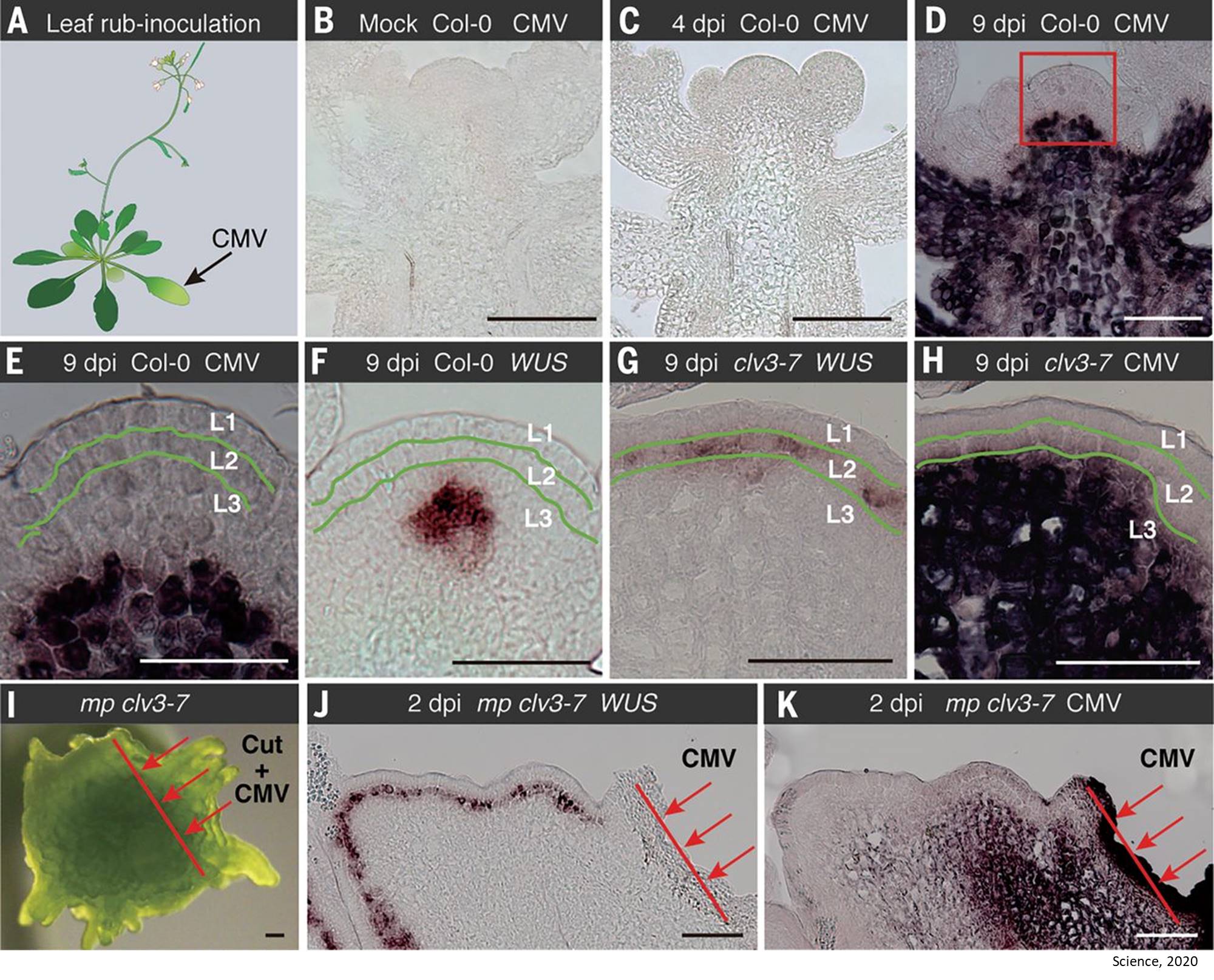 Plants are able to keep growing indefinitely because they have tissues made of meristems--plant stem cells--which have the unique ability to transform themselves into the various specialized cells that make up the plant, dividing whenever appropriate and producing new cells of whatever type as needed. Meristems exist at the tips of all plants, allowing them to grow new stems or new roots, and, in trees, also in the trunk, where they add extra girth.

It has been known since the 1950s that the meristems at the tips of plants, or shoot apical meristems (SAM), have the remarkable ability to remain virus-free as they give birth to their specialized daughter cells, even if the rest of the plant is thoroughly infected by a virus. This happens not just for one or even a few viruses, but a very wide range of them.

This virus-beating ability in perhaps the most important part of a plant has been exploited by scientists and farmers since then in order to cultivate new plants from donor plants that are infected, but without passing on the virus. They simply snip a tiny part of the tip, raise it for a time in a test tube or petri dish, and repeat it several times, the plant cutting typically grows pathogen-free.

Researchers have offered new insights into this incredible ability in a new study published in Science.

The research team inoculated a thale cress plant (Arabidopsis thaliana, related to cabbage and mustard, often used in botanical research as a model organism) with Cucumber Mosaic Virus and watched what happened.

As the virus spread towards the SAM, they noticed that it halted just before it got to a region called the WUSCHEL-expression domain. Taking a very close look at the distribution of the WUSCHEL regulator proteins here, they noticed more had appeared where the virus had tried to establish itself upon inoculation. WUSCHEL is an extremely important protein that plays a key, regulating role in determining stem cell fate, at the early stages of the development of a plant embryo, and also oversees the meristems, maintaining them in an undifferentiated state and specifying what sort of daughter cells they will produce.

Then they inoculated virus directly into the cress's stem cell and just below it, and found that the virus only spread in the latter region. "There's a chemical called dexamethasone that can induce production of these WUSCHEL proteins in our tested plants," said the senior author, "so next, we inoculated more cress with the virus and then gave some of the plants dexamethasone treatment, and some we just left alone." Some 89 percent of the plants without the treatment were infected with the virus, but 90 percent of those with the treatment were free from virus invasion.

How WUSCHEL beat virus? They found surprisingly that the WUSCHEL proteins worked to inhibit production of viral proteins.

Viruses can't make their own proteins, but rather hijack the protein assembly line of an organism and make it produce copies of the virus. The WUSCHEL proteins, which do so much to regulate the SAM, had in essence frozen all protein production--whether by the plant for itself or when hijacked by the virus--thus preventing the viruses from replicating.

Genes similar to those that direct production of WUSCHEL proteins in the thale cress are very widespread across the plant kingdom, so the researchers are interested in seeing "whether this strategy can be applied in breeding to obtain broad-spectrum antiviral crop varieties in the future" says the author.