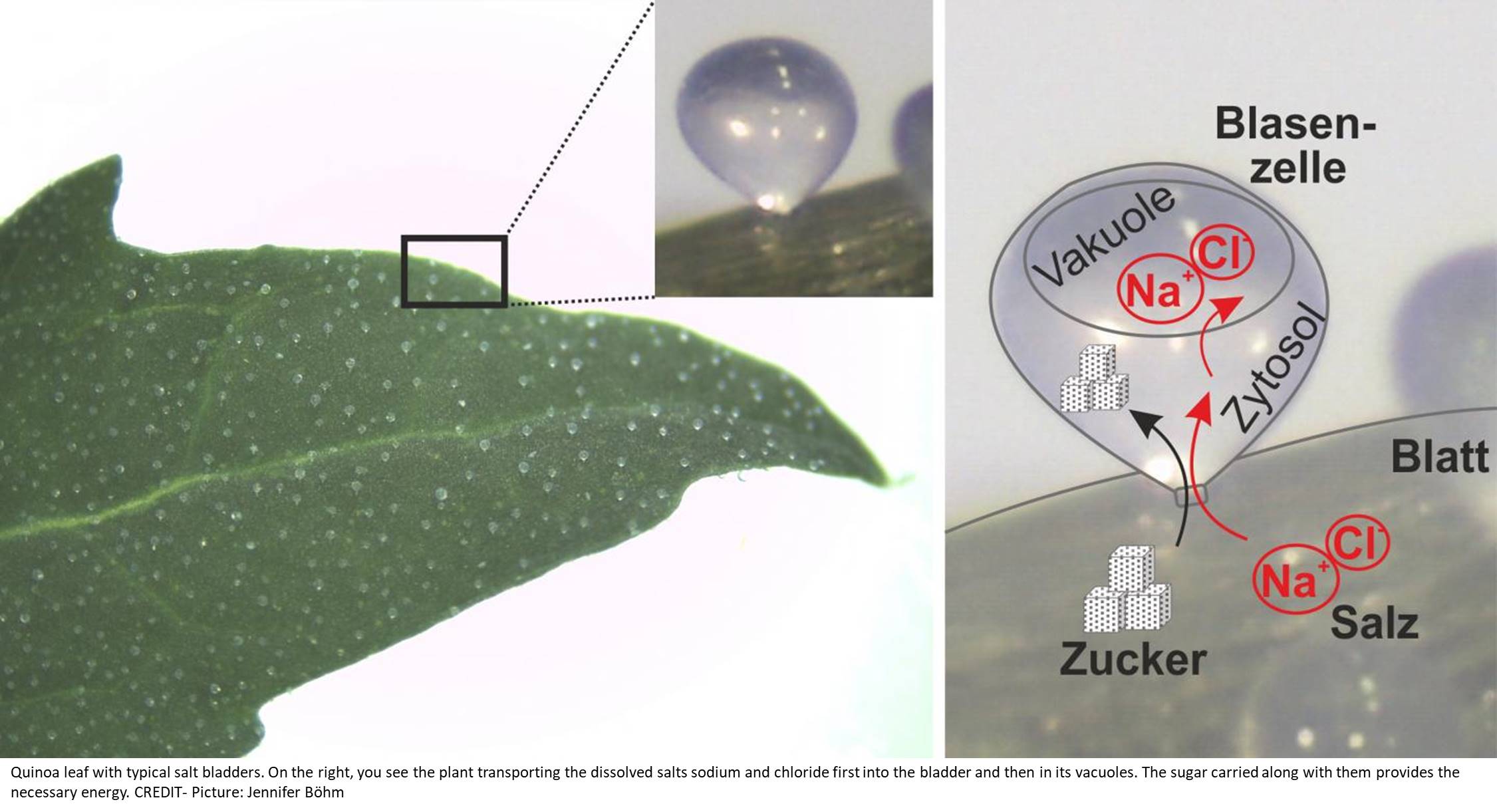 Soil erosion is considered as a problem that puts the nutrition of the human population at jeopardy. One of its aspects is soil salination, which affects in particular dry regions of the earth, where farmers are forced to irrigate their fields heavily. Large quantities of the salts dissolved in the water, such as sodium and chloride, are diffused into the soil and remain there after the water has evaporated. The salt stunts the crops and can even make soils infertile in the long run.

"All approaches so far to breed salt-tolerant plants must be considered more or less as failures", says the plant scientist. They all aimed at making crop plants grow on saline soils and to identify salt-tolerant breed lines in the process. But this approach cannot work.

And that is for a reason: "Our crop plants are the result of many years of breeding. During that time, man has sheltered them from nearly all negative environmental influences, so that they have lost a lot of their natural resilience", explains the senior author. "As soon as these elite lines come in contact with too much salt, they usually die."

The scientists placed their bet on plants that are naturally salt-tolerant. One such plant is quinoa (Chenopodium quinoa). It comes from the Andes, where it has been been used as food for 7,000 years.

Meanwhile the seeds of this South American pseudo-cereal, which are free from gluten and rich in vitamins, have found their way to European supermarket shelves.

The plant absorbs salt from the soil and stores it in bladder-shaped cells on the surface of its leaves. This protects the salt-sensitive metabolic processes, and the plant can grow well even on saline soils. Without bladder cells quinoa suffers from salt stress.

The researchers have found a simple way of proving that it is really the bladder cells that ensure the plant's salt tolerance. "Just a few light brush strokes over a quinoa leaf cause the bladder cells to fall off", says the author. Stripped of their salt bladders, these plants grow on non-saline soils just as well as non-brushed specimens. But an exposure to common salt stunts their growth significantly.

The round to oval bladder cells of quinoa have a diameter of almost half a millimeter. They are veritable giants in the kingdom of plants, and can usually be seen even with the naked eye. Their storage capacity is up to 1000 times higher than that of any normal cell of the leaf surface.

To get an insight into the "operating system" of quinoa and its bladder cells, the has decoded the Andes cereal's DNA. The team then compared the active genes of leaves and bladder cells. The necessary bioinformatic analyses were performed.

The result: Even without salt treatment, there are genes working in the bladder cells which are in other species only active when the plant is under stress. They include transporters carrying sodium and chloride ions into the bladder cell. A stimulation with salt triggers the activation of further genes needed to maintain the signal path for the stress hormone ABA.

Storing the salt consumes energy. This energy is generated by the bladder cells from sugar molecules which they specially import from the leaf for that purpose. The bladder cells receive the required energy from the leaf and reciprocate by absorbing the toxic salt", explains the senior author.

The new findings have been published in the Cell Research journal. They are to be used in the long term for the breeding of salt-tolerant plants. "The first step is made", says the author. "We will now use a combination of developmental genetics and the functional analysis of salt transport proteins to understand the molecular mechanisms that produces and maintains the salt tolerance in quinoa."

The research team wants to learn from quinoa lines equipped with a very large or a very low number of salt bladders. It has a large pool to draw on: about 2000 wild and cultivated varieties of the plant from the Andes are known so far. The ultimate outcome of their work might be not only the breeding of quinoa varieties with an even higher salt tolerance but also the crossbreeding of salt tolerance genes into related crop plants such as sugar beets or spinach.