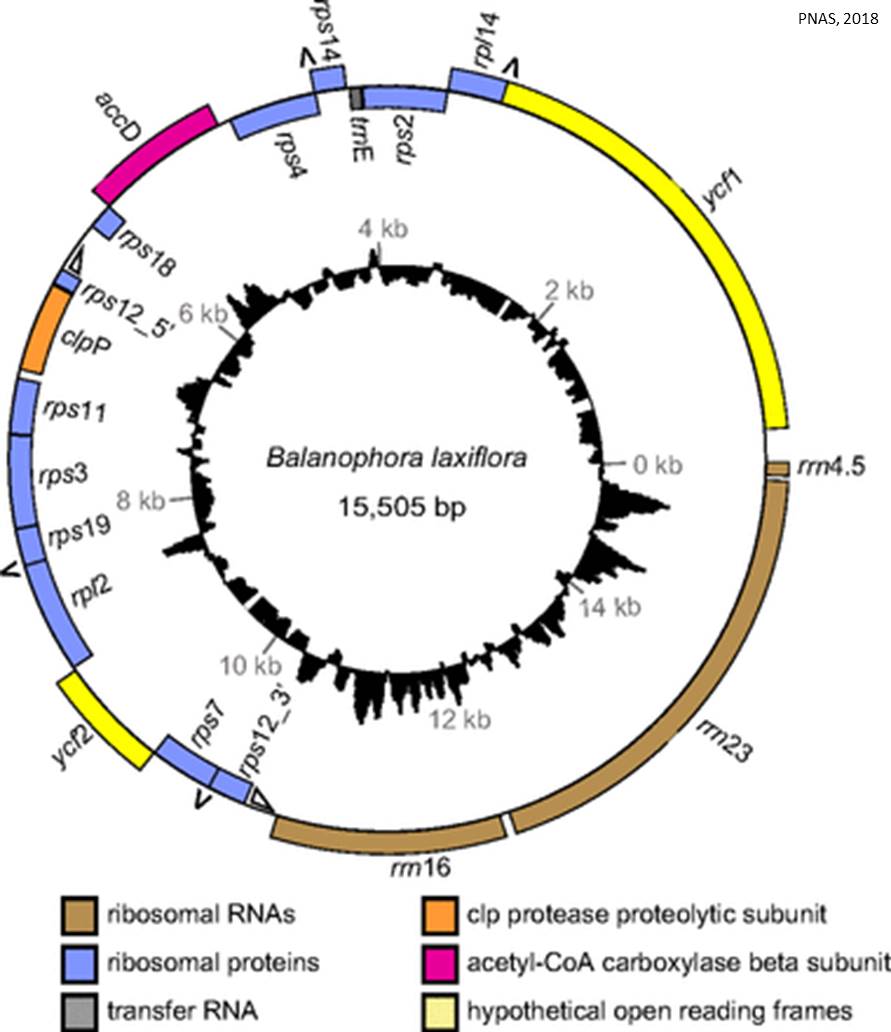 Researchers sequenced and analyzed the plastid genomes of two species of Balanophora, a fully parasitic mushroom-like plant that produces some of the smallest known flowers. Balanophora plastomes are exceptionally compact, with numerous overlapping genes, highly reduced spacers, loss of all cis-spliced introns, and shrunken protein genes.

The pair of plastid genomes, around 15.5 kb in size and harboring 19 putatively functional genes, are among the smallest and most compact plastid genomes documented. Both genomes consist largely of adenine (A) and thymine (T) nucleotides, carrying more than 87% AT content. Most plastid protein genes in Balanophora consist of ≥90% AT, with several between 95% and 98% AT, resulting in the most biased codon usage in any genome described to date.

The authors discovered a novel genetic code in the Balanophora plastids: the triplet codon TAG, which functions as a stop codon during protein synthesis in the canonical code, is reassigned to encode the amino acid tryptophan.

Moreover, 14 of the 19 genes in Balanophora plastids are devoted to protein synthesis, despite the loss of all plastid transfer RNA genes (a trait found in only three other plastid lineages) for protein synthesis, suggesting that the parasites import the transfer RNAs from the cytosol, with the corresponding genes residing in the Balanophora nucleus or mitochondrion.

Despite its many exceptional properties, the Balanophora plastome must be functional because all examined genes are transcribed, its only intron is correctly trans-spliced, and its protein genes, although highly divergent, are evolving under various degrees of selective constraint.According to the authors, the findings pave the way for studies of radical genome evolution.