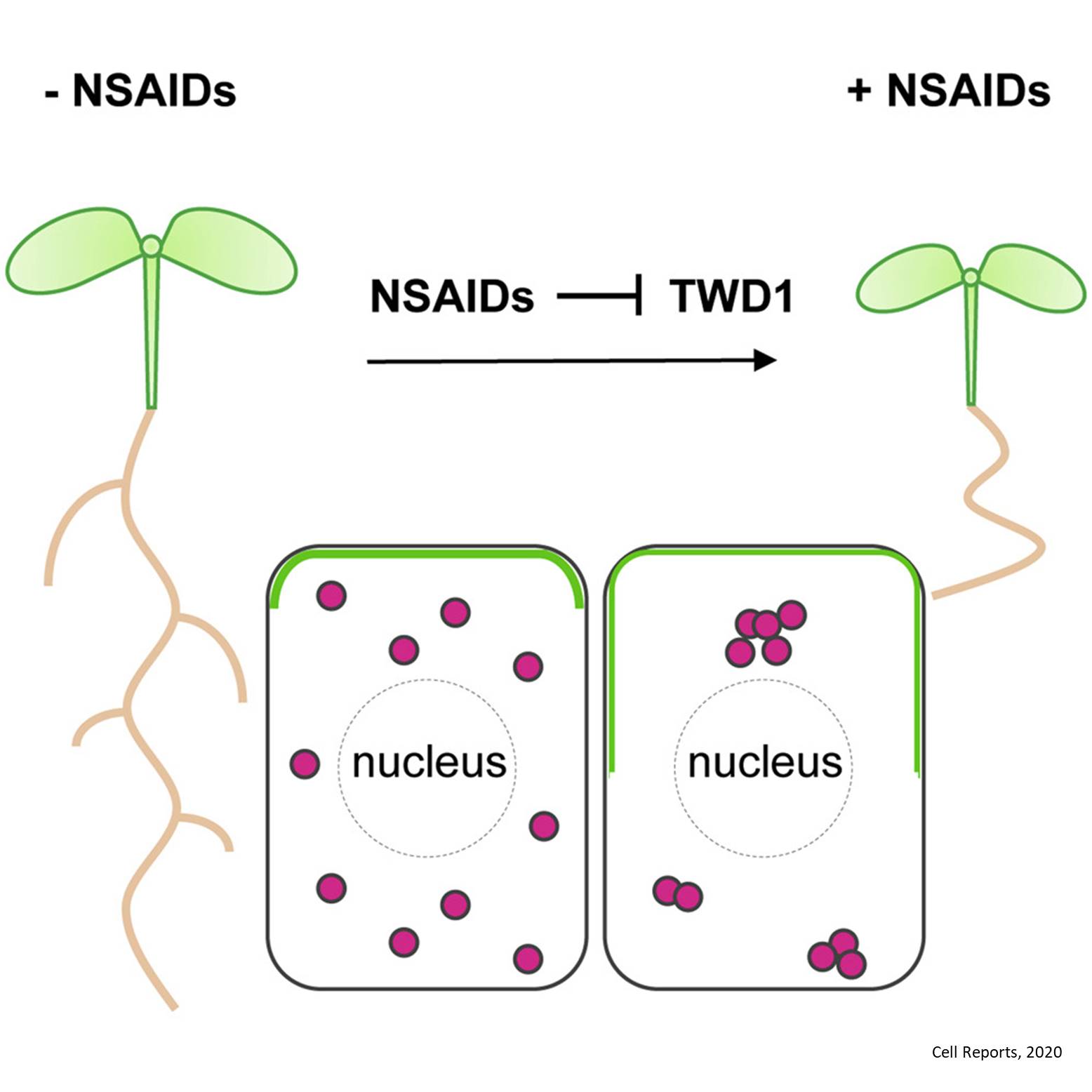 When pathogens enter a plant, infected cells set off an alarm before they die. They discharge methylsalicylic acid, which is later transformed into salicylic acid, triggering an immune response. Hence, salicylic acid is a stress signal in plants, but it also participates in regulating plant growth and development. In humans, salicylic acid proofed to be useful in a different way: Already in prehistoric times people realized that when they were drinking willow bark tea or taking other willow bark preparations, fever dropped and pain disappeared. Centuries later, scientists developed salicylic acid derivatives such as Aspirin and Ibuprofen. These so called non-steroidal anti-inflammatory drugs (NSAIDs) suppress the inflammatory response of mammalian cells, thereby making us feel better when we have a cold. But how do they affect plants?

"When I got the idea, I had a really serious toothache and I had some Ibuprofen at hands," explains the lead author. "I simply used the tablets from the pharmacy and I took the same amount as in my previous experiments with salicylic acid. Then, I observed the effect of the Ibuprofen on Arabidopsis seedlings." The primary roots of the plant were significantly shorter and instead of growing downward, they were curling up, unable to respond to gravity. Furthermore, the plants developed fewer or no lateral roots at all.

The authors looked at the effects of 20 different painkillers on Arabidopsis seedlings. "We found that all of the painkillers we tested, including Aspirin and Ibuprofen, were interfering with the auxin flow," explains the lead. The plant hormone auxin is essential for all developmental processes within a plant. It is especially responsible for a plants ability to stretch its leaves towards the sun and its roots towards the center of the earth. So called PIN proteins regulate the flow of auxin from one cell to the other, depending on which side of the cell they are sitting. If the PIN proteins are not at the right location within the cell, the flow of auxin is disturbed, leading to a faulty development of the plant. Hence, the painkillers seemed to interfere with the localization of the PIN proteins. But it didn't stop there.

Looking closely, the scientists discovered that the effect is not limited to PIN proteins, but that the drugs interfere with the whole endomembrane system, suppressing the movement and trafficking of substances within the cells. The painkillers impair the dynamics of the cytoskeleton of the cells, a network of interlinking proteins, which among many other things gives the cell its shape and is involved in the uptake of extracellular material. The researchers uncovered that one group of painkillers, including the drugs Meclofenamic acid and Flufenamic acid, directly target an immunophilin-like protein, called TWISTED DWARF1, to realize these physiological and cellular activities.

Furthermore, the scientists were able to show, that NSAIDs have similar physiological and cell biological effects as auxin transport inhibitors - important chemical tools in cell biology, which interfere with the transport of auxin. "It would be very interesting to find out, if these auxin transport inhibitors can also be used as painkillers in animals. That is one big question we still need to answer" concludes the lead author. The authors also want to investigate which additional proteins within the plant are targeted by the painkillers and what pathways they use to do so.