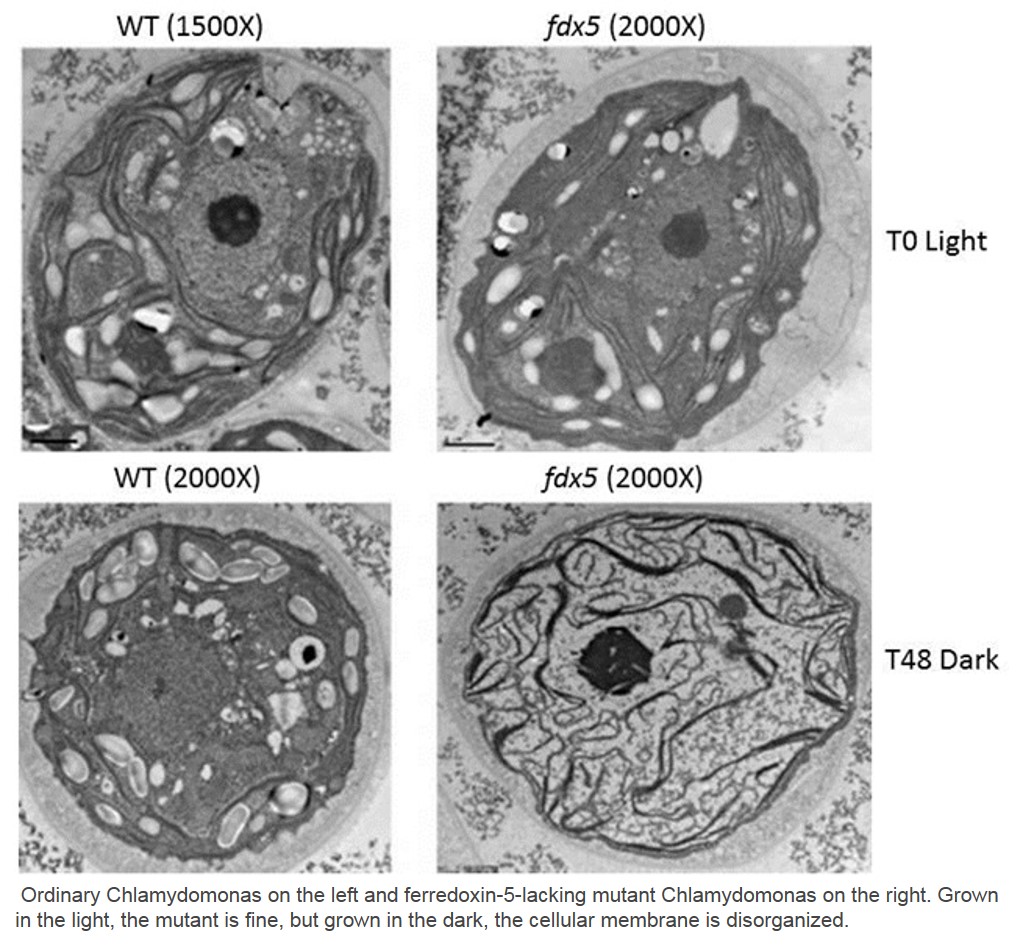 New work that focused on this nighttime growth of plants found a protein that is necessary for it to occur and, surprisingly, the role of this protein was linked to the construction of the plant's cellular membranes. It is published by Proceedings of the National Academy of Sciences.

It demonstrates that in the photosynthetic alga Chlamydomonas, the protein ferredoxin-5 is critical for growth in dark and for proper membrane organization.

Ferredoxin-5 is a member of a family of small iron-sulfur proteins that provide the electrons needed to drive various metabolic reactions in the cell. Photosynthetic organisms typically have multiple different types of ferredoxins, although little is known about how their functions differ.

The team found that a specific mutant lacking the ferredoxin-5 protein was unable to grow in the dark (in the nighttime) or perform normal metabolic functions, but it had no trouble growing during the light (in the daytime).

These membranes are made up of lipids, which are fatty acids linked to a glycerol backbone. The ferredoxin-5 mutant shows marked alterations in the bond structure of many of these fatty acids, which changes the degree of saturation in the fatty acids present in the membranes. (Fully saturated fatty acids have single bonds between all of their carbon atoms while unsaturated fatty acids may have anywhere from one to several double bonds between their carbon atoms.) This, in turn, appears to impact the lipid composition of the membranes and results in aberrant membrane structure that impairs metabolic processes, including photosynthesis, that occur on those membranes.

The team's findings suggest that one of the biochemical reactions that ferredoxin-5 drives through its electron-donating abilities is this alteration in the saturation state of fatty acids. This result indicates that when the alga is in the dark, ferredoxin-5 specifically donates electrons to enzymes that specialize in desaturating fatty acids; it may also donate electrons to other processes in the dark. (In the light, however, another member of the ferredoxin family may take on this responsibility, which is why the aberrant membrane structure is only observed in plants that are maintained in darkness.) .