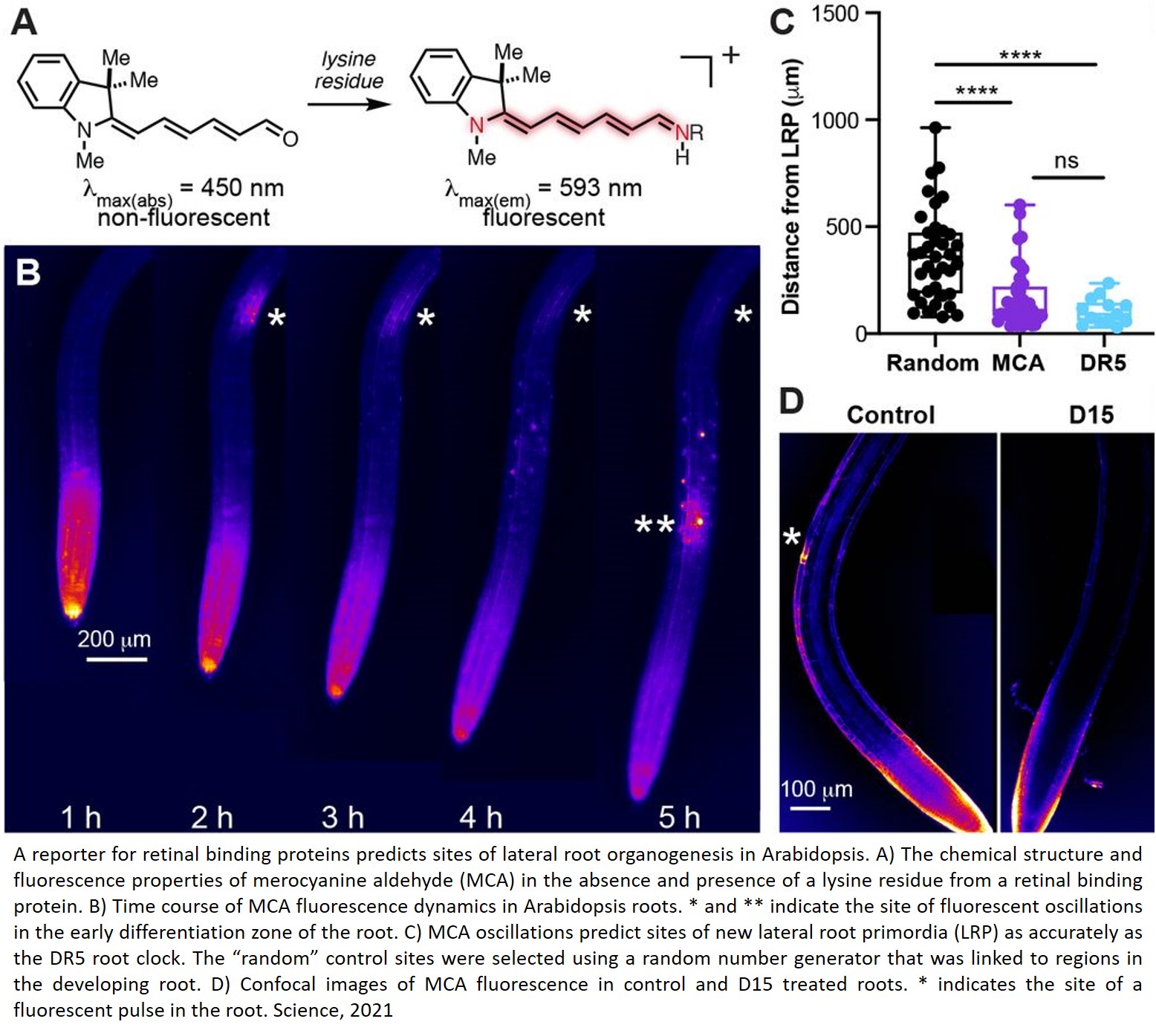 What do frog eggs have in common with anti-aging creams? Their success depends on a group of chemical compounds called retinoids, which are capable of generating and re-generating tissues.

A new study in plants shows that retinoids’ tissue-generating capacities are also responsible for the appropriate development of roots.

If you’ve ever planted a radish seed, you know that the first thing it does is develop a long vertical root. Give it a bit more time, and it will get smaller roots that run perpendicular to the plant’s stem. Over time, these lateral roots will branch repeatedly and spread out, forming a web that stabilizes and feeds the plant.

These lateral roots don’t just spring out randomly. They appear and then branch out at regular intervals along a main axis, following a rhythm. What regulates and determines their development and rhythm was not known, until now.

In a new study, appearing in the journal Science, a research team identifies the compound that plays a key role in triggering the development of plants’ lateral roots.

The research team had a good suspect: retinal, a type of retinoid, looked like it would fit the bill.

In humans, as well as all vertebrate animals, turning a fertilized egg into an embryo with a little beating heart requires that stem cells differentiate, specialize, and generate specific tissues, such as bones, blood vessels and a nervous system. This process is kickstarted and regulated by retinal. Animals can’t produce their own retinal, though, they must ingest it from plants, or from animals that eat plants.

“We know plants have the ability to produce this compound, that it’s very important for animal development, and so it was very tempting to check its role in plant development as well,” said the study lead.

In order for plants to put retinal to good use, retinal molecules must form a tag-team with a protein inside the plant cell, in a process called protein binding.

To test if retinal was indeed behind lateral root development, the team treated seedlings with a dye that glows when retinal is bound by a protein inside a cell. As the seedling grew, glowing dots appeared near the tip of the main root. Soon after, a lateral root would grow from those glowing spots.

The process repeated at regular intervals as the seedling developed, showing that the growth of a lateral root was preceded by a peak in retinal binding.

To confirm their findings, the team applied retinal directly to the plants’ primary root. Seedlings that got a retinal booster developed more lateral roots than normal.

To be extra sure, the team applied a compound that made plants incapable of producing retinal, and saw that these seedlings made very few lateral roots.

They then applied retinal directly to these seedlings’ primary root, and sure enough, lateral roots started developing where retinal had been applied.

“All the ways in which we looked at this question came back very positive,” the author said.

“If an embryo is starved of retinal during its development, it will have developmental defects,” the author said. “It’s surprisingly analogous to what happens with plants and their lateral roots.”

And the similarities don’t stop there: the cells of an animal embryo rely on special proteins to grab retinal from their surroundings. Plants produce their own retinoids, but they still need special proteins to bind them and activate developmental processes.

The research team found that the protein plants use to bind retinal is a doppelganger of the one found in animal cells. They are different, but have a similar structure and shape.

“It is pretty exciting to have found both the signal that triggers root development and the protein that binds it,” the author said.

Plants and vertebrate animals are very different organisms, whose evolutionary paths went their separate ways over 1,500 million years ago. Finding that both use closely related chemical compounds to generate new tissues during their development is an example of nature independently reaching similar solutions to similar problems in two very different organisms, a phenomenon called “convergent evolution.”

Retinoids have multiple medical uses, from acne cream to cancer therapy. Discovering the exact ways in which they regulate the development of plant root tissues opens a whole new set of doors.

“We've found a new pathway that gives information to cells and convinces them to build a new organ instead of doing the job that they were initially assigned,” the lead said. “So maybe we can take something from plants and use it to better understand what's happening in humans.”