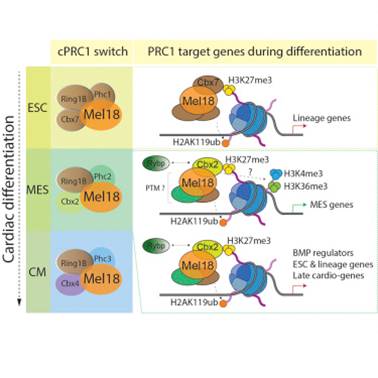 Researchers found a protein known as Mel18 is responsible for regulating a piece of cellular machinery that applies temporary silencers to the DNA in developing cells.

This protein is normally active in a group of embryonic stem cells in the mesoderm - a layer in the embryo that develops into all the muscles and red blood cells in the body.

By acting on a protein complex known as PRC1 - a member of the Polycomb family of protein complexes that remodel the structure of chromosomes - it is able to silence certain genes. This seems to set the developing cells off down a pathway that sees them differentiate into specialised heart muscle cells.

However, the researchers found Mel18 also serves another unexpected function by turning on particular genes as the cardiac cells begin to develop in the mesoderm. Together this dual functionality appears to result in the growth of healthy heart tissue.

According to the author: "Mel18 is highly expressed in embryonic stem cells. During differentiation its expression goes down, while those of its brothers goes up. Interestingly this occurs in a cell-specific manner, which means each brother seems to be responsible for the differentiation of a set of cell types”.

“Mel18 remains high in cardiac cells, while it is not really expressed in neuronal cell precursors, for example. Although we have not looked in to it with great detail, it is likely that mis-expression of Mel18 in cardiac cells might be responsible for heart defects or pathologies."

Mesoderm cells with depleted levels of Mel18 were also found to be blocked from developing as functioning heart muscle cells and few were capable of beating. This suggests deficiencies in Mel18 may be involved in causing certain cardiac problems where the heart muscle develops abnormally.