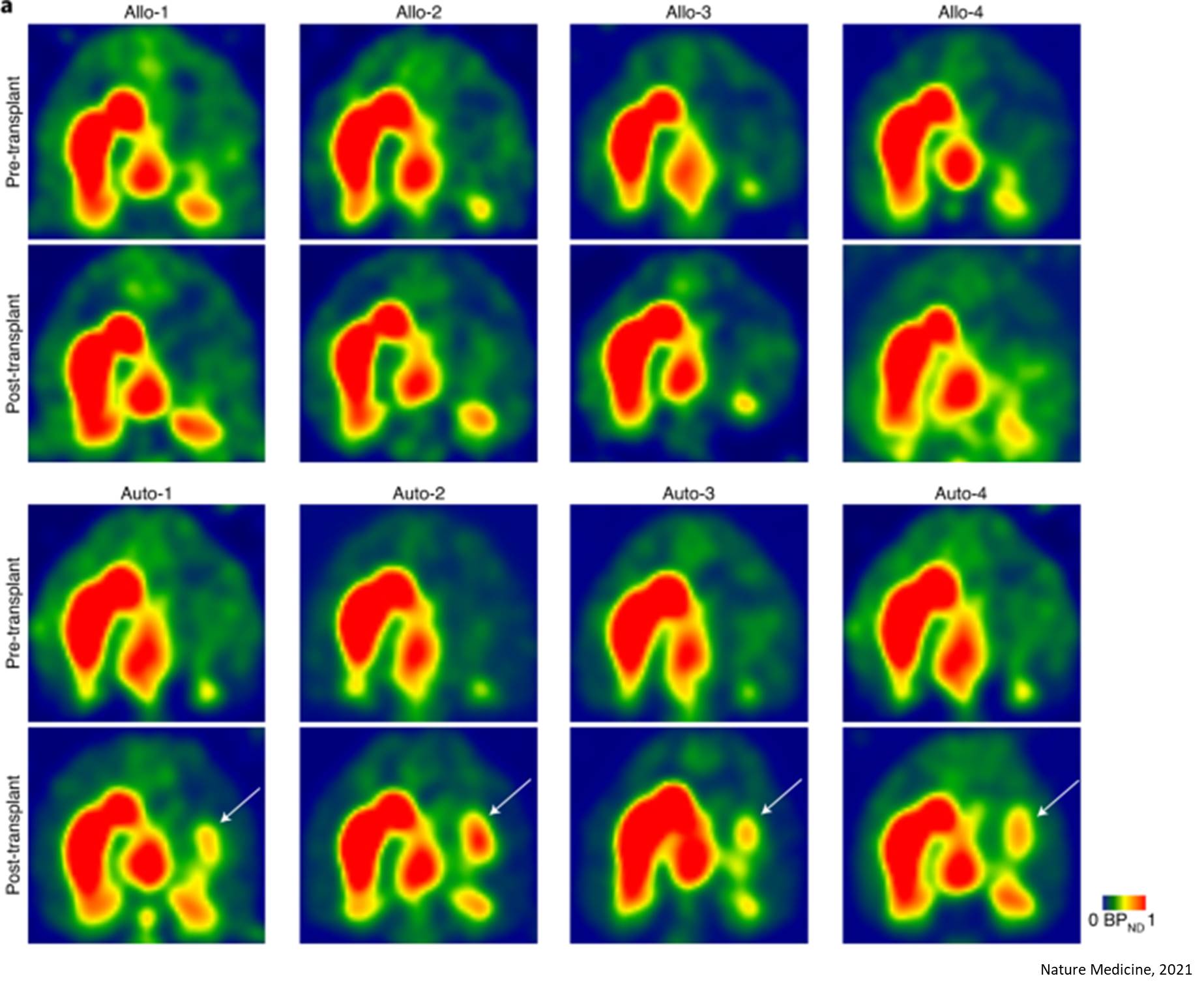 Grafting neurons grown from monkeys' own cells into their brains relieved the debilitating movement and depression symptoms associated with Parkinson's disease, researchers reported.

In a study published in the journal Nature Medicine, the team describes its success with neurons made from induced pluripotent stem cells from the monkeys' own bodies. This approach avoided complications with the primates' immune systems and takes an important step toward a treatment for millions of human Parkinson's patients.

Parkinson's disease damages neurons in the brain that produce dopamine, a brain chemical that transmits signals between nerve cells. The disrupted signals make it progressively harder to coordinate muscles for even simple movements and cause rigidity, slowness and tremors that are the disease's hallmark symptoms. Patients -- especially those in earlier stages of Parkinson's -- are typically treated with drugs like L-DOPA to increase dopamine production.

"Those drugs work well for many patients, but the effect doesn't last," says the author. "Eventually, as the disease progresses and their motor symptoms get worse, they are back to not having enough dopamine, and side effects of the drugs appear."

Scientists have tried with some success to treat later-stage Parkinson's in patients by implanting cells from fetal tissue, but research and outcomes were limited by the availability of useful cells and interference from patients' immune systems. The lab has spent years learning how to dial donor cells from a patient back into a stem cell state, in which they have the power to grow into nearly any kind of cell in the body, and then redirect that development to create neurons.

"The idea is very simple," the author says. "When you have stem cells, you can generate the right type of target cells in a consistent manner. And when they come from the individual you want to graft them into, the body recognizes and welcomes them as their own."

The application was less simple. More than a decade in the works, the new study began in earnest with a dozen rhesus monkeys several years ago. A neurotoxin was administered -- a common practice for inducing Parkinson's-like damage for research -- and the lab evaluated the monkeys monthly to assess the progression of symptoms.

"We evaluated through observation and clinical tests how the animals walk, how they grab pieces of food, how they interact with people -- and also with PET imaging we measured dopamine production," the author says. (PET is positron emission tomography, a type of medical imaging.) "We wanted symptoms that resemble a mature stage of the disease."

Guided by real-time MRI that can be used during procedures and was developed during the course of the Parkinson's study, the researchers injected millions of dopamine-producing neurons and supporting cells into each monkey's brain in an area called the striatum, which is depleted of dopamine as a consequence of the ravaging effects of Parkinson's in neurons.

Half the monkeys received a graft made from their own induced pluripotent stem cells (called an autologous transplant). Half received cells from other monkeys (an allogenic transplant). And that made all the difference.

Within six months, the monkeys that got grafts of their own cells were making significant improvements. Within a year, their dopamine levels had doubled and tripled.

"The autologous animals started to move more," the author says. "Where before they needed to grab the cage to stand up, they started moving much more fluidly and grabbing food much faster and easier."

The monkeys who received allogenic cells showed no such lasting boost in dopamine or improvement in muscle strength or control, and the physical differences in the brains were stark. The axons -- the extensions of nerve cells that reach out to carry electrical impulses to other cells -- of the autologous grafts were long and intermingled with the surrounding tissue.

"They could grow freely and extend far out within the striatum," says the first author of the study. "In the allogenic monkeys, where the grafts are treated as foreign cells by the immune system, they are attacked to stop the spread of the axons."

The missing connections leave the allogenic graft walled off from the rest of the brain, denying them opportunities to renew contacts with systems beyond muscle management.

"Although Parkinson's is typically classified as a movement disorder, anxiety and depression are typical, too," the author says. "In the autologous animals, we saw extension of axons from the graft into areas that have to do with what's called the emotional brain."

Symptoms that resemble depression and anxiety -- pacing, disinterest in others and even in favorite treats -- abated after the autologous grafts grew in. The allogenic monkeys' symptoms remained unchanged or worsened.