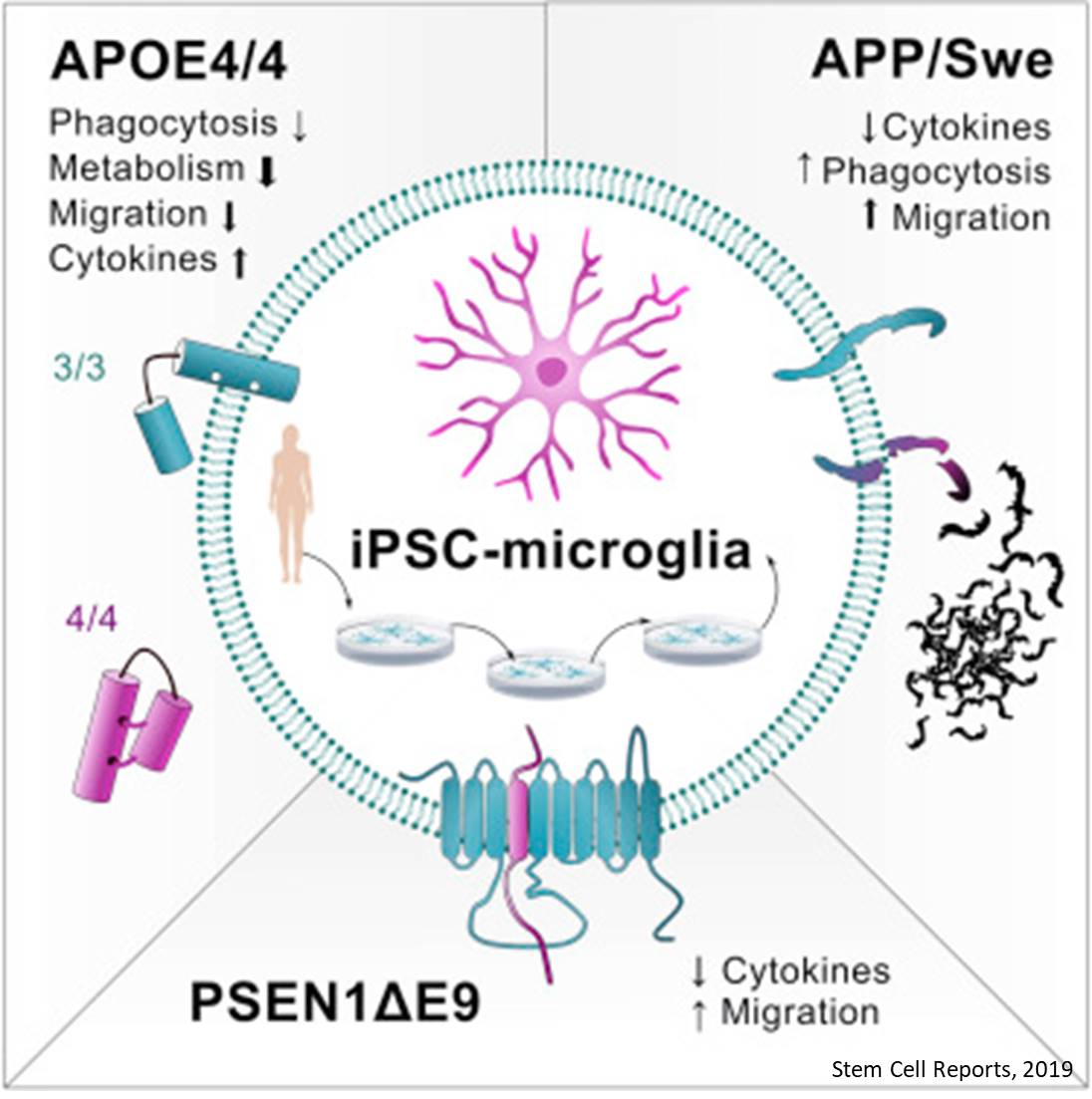 A study carried out with a new human stem cell-derived model reveals that the most prevalent genetic risk factor of Alzheimer's disease (AD), apolipoprotein E4 (APOE4), impairs the function of human brain immune cells, microglia. These findings pave the way for new, effective treatment approaches for AD. The results were published in Stem Cell Reports.

The study of human microglia has been hindered by the considerable challenges of isolating sufficient numbers of viable microglia from human brain tissue. The new study presents a protocol to differentiate patient-derived stem cells to produce large numbers of human microglia that closely resemble their in vivo counterparts and that can be studied under controlled laboratory conditions.

Alzheimer's disease, the most common cause of dementia among the elderly, is thought to be caused by the abnormal build-up of amyloid protein in the brain. However, it is not known exactly what causes this process. Amyloid build-up is characterized by accompanying damage to the neurons, leading to cell death and shrinking of the brain. There is no treatment to cure or slow down the progress of the disease. Several promising compounds in animal trials have proven to be disappointing in clinical studies with humans. Most efforts to find a cure have focused on inhibiting the production of amyloid proteins.

Microglia remove amyloid from the brain using a mechanism called phagocytosis, and they take care of other inflammatory processes in the brain. The growing body of evidence shows that there are important differences between humans and animals especially in inflammatory processes. In Alzheimer's disease, the function of microglia is compromised, but it is incompletely understood why microglia are unable to remove toxic amyloid in patients. Instead, microglia either lose their normal function or activate adversely and increase the loss of neurons.

APOE4 is the strongest genetic risk factor for Alzheimer's disease. Apolipoprotein, APOE, plays a critical role in the metabolism of lipids, such as cholesterol, and contributes to repairing neuronal damage in the brain. APOE is present in humans in three isoforms, and genetics determines which forms an individual carries. Only the APOE4 form predisposes for Alzheimer's disease, and over half of patients carry this form. In humans, the APOE gene is abundantly expressed in microglia, but its role specifically in these cells is poorly understood.

Using 16 iPSC lines from healthy donors, AD patients and isogenic controls, the authors reveal that the APOE4 genotype has a profound impact on several aspects of microglial functionality, whereas PSEN1ΔE9 and APPswe mutations trigger minor alterations.

In the present study, researchers showed that APOE4 increases the inflammatory response of human microglia, but at the same time reduces the ability of the cells to migrate and phagocytose pathogenic material. These functions are important for maintaining the brain homeostasis, to protect from pathogens and control the normal cell death that comes with aging. APO E also exacerbates their cytokine secretion,

The present study reveals a new, interesting observation for treatment: microglia may have a significant role in the progression of Alzheimer's disease, independent from their ability to remove toxic amyloid build-up. Patient stem cell-derived microglia offer an exciting new tool enabling studies of molecular mechanisms in other brain diseases, too, as well as controlled studies of new targeted therapies.