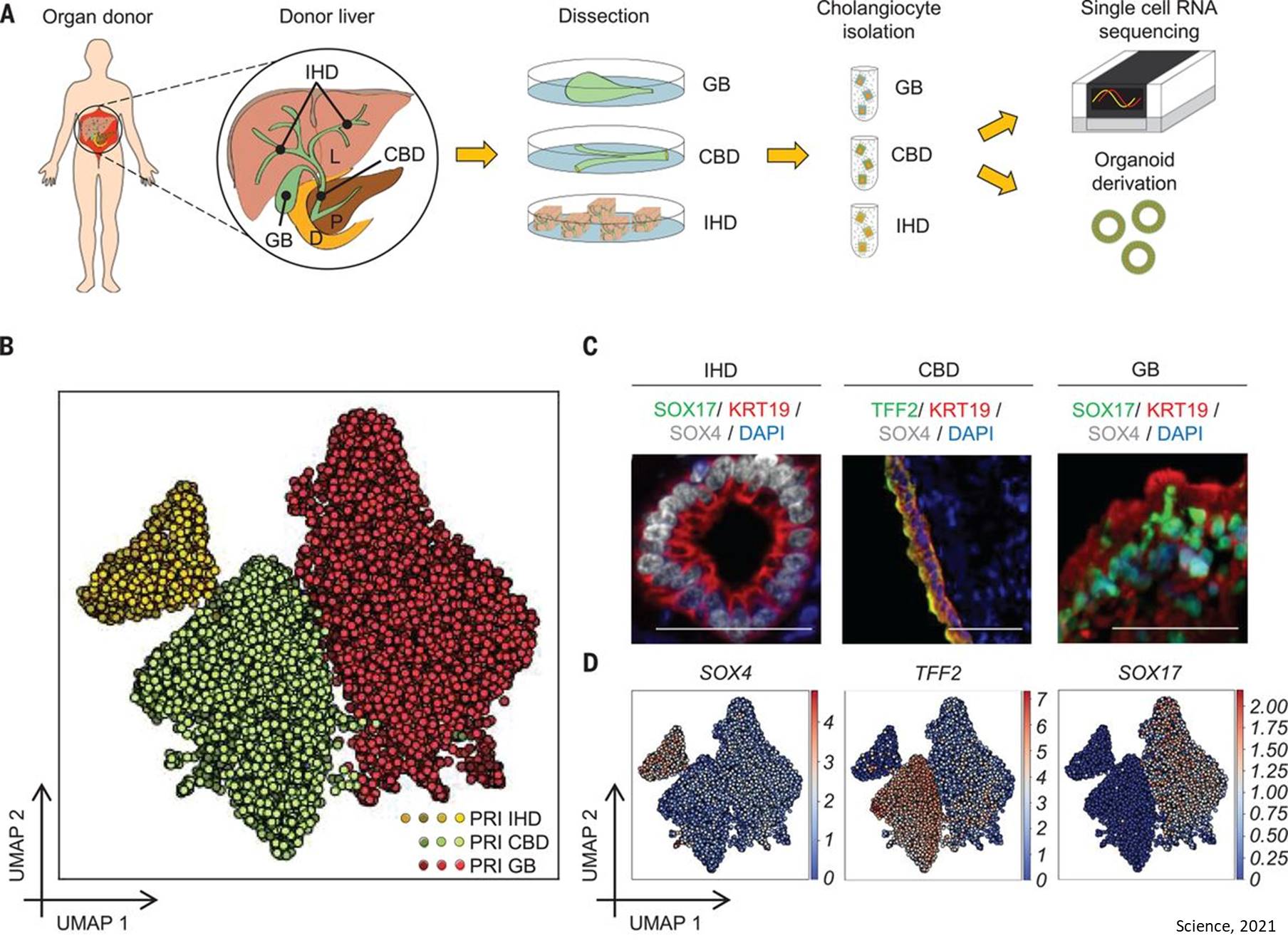 Scientists have used a technique to grow bile duct organoids - often referred to as 'mini-organs' - in the lab and shown that these can be used to repair damaged human livers. This is the first time that the technique has been used on human organs.

The research paves the way for cell therapies to treat liver disease - in other words, growing 'mini-bile ducts' in the lab as replacement parts that can be used to restore a patient's own liver to health - or to repair damaged organ donor livers, so that they can still be used for transplantation.

Bile ducts act as the liver's waste disposal system, and malfunctioning bile ducts are behind a third of adult and 70 per cent of children's liver transplantations, with no alternative treatments. There is currently a shortage of liver donors: according to the NHS, the average waiting time for a liver transplant in the UK is 135 days for adults and 73 days for children. This means that only a limited number of patients can benefit from this therapy.

Approaches to increase organ availability or provide an alternative to whole organ transplantation are urgently needed. Cell-based therapies could provide an advantageous alternative. However, the development of these new therapies is often impaired and delayed by the lack of an appropriate model to test their safety and efficacy in humans before embarking in clinical trials.

Now, in a study published in Science, scientists have developed a new approach that takes advantage of a recent 'perfusion system' that can be used to maintain donated organs outside the body. Using this technology, they demonstrated for the first time that it is possible to transplant biliary cells grown in the lab known as cholangiocytes into damaged human livers to repair them. As proof-of-principle for their method, they repaired livers deemed unsuitable for transplantation due to bile duct damage. This approach could be applied to a diversity of organs and diseases to accelerate the clinical application of cell-based therapy.

"Given the chronic shortage of donor organs, it's important to look at ways of repairing damaged organs, or even provide alternatives to organ transplantation," said the author. "We've been using organoids for several years now to understand biology and disease or their regeneration capacity in small animals, but we have always hoped to be able to use them to repair human damaged tissue. Ours is the first study to show, in principle, that this should be possible."

Bile duct diseases affect only certain ducts while sparing others. This is important because in disease, the ducts in need of repair are often fully destroyed and cholangiocytes may be harvested successfully only from spared ducts.

Using the techniques of single-cell RNA sequencing and organoid culture, the researchers discovered that, although duct cells differ, biliary cells from the gallbladder, which is usually spared by the disease, could be converted to the cells of the bile ducts usually destroyed in disease (intrahepatic ducts) and vice versa using a component of bile known as bile acid. This means that the patient's own cells from disease-spared areas could be used to repair destroyed ducts.

To test this hypothesis, the researchers grew gallbladder cells as organoids in the lab. Organoids are clusters of cells that can grow and proliferate in culture, taking on a 3D structure that has the same tissue architecture, function and gene expression and genetic functions as the part of the organ being studied. They then grafted these gallbladder organoids into mice and found that they were indeed able to repair damaged ducts, opening up avenues for regenerative medicine applications in the context of diseases affecting the biliary system.

The team used the technique on human donor livers taking advantage of the perfusion system used by researchers based at Addenbrooke's Hospital, part of Cambridge University Hospitals NHS Foundation. They injected the gallbladder organoids into the human liver and showed for the first time that the transplanted organoids repaired the organ's ducts and restored their function. This study therefore confirmed that their cell-based therapy could be used to repair damaged livers.

A joint senior author, said: "This is the first time that we've been able to show that a human liver can be enhanced or repaired using cells grown in the lab. We have further work to do to test the safety and viability of this approach, but hope we will be able to transfer this into the clinic in the coming years."

Although the researchers anticipate this approach being used to repair a patient's own liver, they believe it may also offer a potential way of repairing damaged donor livers, making them suitable for transplant.