Brain organoids are under stress and show identity crisis 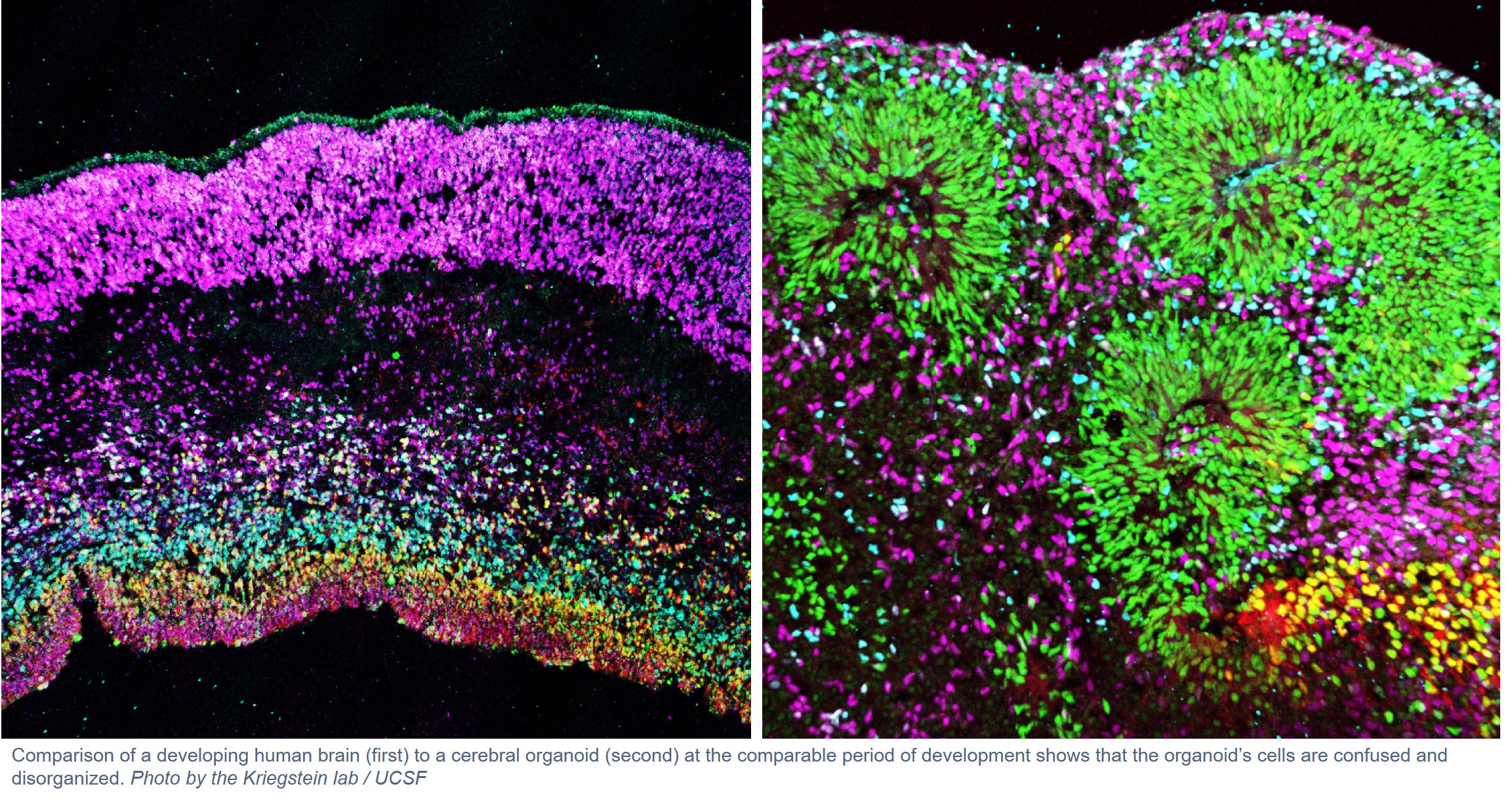 Brain organoids -- three-dimensional balls of brain-like tissue grown in the lab, often from human stem cells -- have been touted for their potential to let scientists study the formation of the brain's complex circuitry in controlled laboratory conditions. The discussion surrounding brain organoids has been effusive, with some scientists suggesting they will make it possible to rapidly develop treatments for devastating brain diseases and others warning that organoids may soon attain some form of consciousness.

But a new study offers a more restrained perspective, by showing that widely used organoid models fail to replicate even basic features of brain development and organization, much less the complex circuitry needed to model complex brain diseases or normal cognition.

"Some people have branded organoids as 'brains in a dish' but our data suggest this is a huge exaggeration at this point," said the senior author. "We find that organoids do not develop the distinctive cell subtypes or regional circuit organization that characterize normal human brain circuits. Since most human brain diseases are highly specific to particular cell types and circuits in the brain, this presents a grave challenge to efforts to use organoids to accurately model these complex conditions."

However, when they began comparing data from the developing brain to the lab's organoid models, they quickly discovered that the exquisitely organized developmental programs seen in normal brain tissue were significantly disrupted in the lab's organoids.

The researchers measured gene expression in more than 235,000 individual cells extracted from 37 different organoids (themselves generated using three different laboratory protocols and four different starting stem cell lines) and compared these gene expression patterns to what they saw in about 189,000 brain cells from a range of brain areas and developmental timepoints in normally developing human brains.

This analysis revealed that instead of differentiating normally into the brain's distinctive cell types, organoid cells appeared to experience an identity crisis: expressing a mixed bag of genes normally found in very different kinds of cells. At first, the organoids developed structured "rosettes" of cells that resemble some features of the developing brain, but these quickly dissolved into a hodge-podge of intermingled cells. "We were able to identify the major broad categories of cell types, but the normal diversity of subtypes -- which play key role in the proper function of neural circuits -- was lacking," the author said.

To make sure these results extended to other common ways of making organoids used outside the lab, the researchers compared single-cell gene expression data from eight different organoid protocols published in the scientific literature (for a total of more than 276,000 individual cells) to their atlas of normal gene expression in the developing brain. In every case the published organoids showed the same lack of appropriate development into distinctive cell types as the lab had seen in their own models.

"The brain's ability to wire together different cell types into highly structured and regionally distinctive circuits is central not only to normal brain function and cognition, but it is also these highly specific circuits that go awry in different ways in brain diseases such as autism, schizophrenia, and other psychiatric and neurological disorders," the author said.

"Before we can use organoids to study these diseases and search for potential cures, we need to ensure they are actually modeling the brain circuits that are affected," the author added.

In addition to their confused developmental programming, the brain organoid models all expressed abnormally high levels of cellular "stress" genes, which control cells' response to harmful environmental conditions such as lack of oxygen. The researchers hypothesized that this heightened cellular stress could be caused by methods used when the organoids were being grown in the lab, and might be preventing the organoids from developing proper neural cell types and regional organization.

To test this hypothesis, the researchers took cells from developing organoids and implanted them into the brains of mice to eliminate stressors caused by being grown in a lab dish. In this more natural context, the organoids' cellular stress levels quickly fell to normal levels, and normal developmental programs began to reassert themselves. Conversely, when the researchers took early developing neural tissue and tried to grow it with their laboratory organoids, stress genes became more activated, and the young neurons developed the same kind of identity crisis seen in the lab's organoids.

These results suggest that neuroscientists' ambitions to model complex brain organization in organoids will require a significant rethinking of how organoids are grown in the lab to try to reduce levels of cellular stress.

"Different groups have optimized how they culture organoids in lots of different ways, so the fact that we see these issues across organoids from different laboratories suggests it's probably going to take a pretty big overhaul to improve how organoids turn out," the author said. "That's not going to be an easy task, but I'm hopeful that these results and Aparna's unique dataset of the genetic programs in the normally developing brain will point the field in the right direction."

The authors emphasize that organoids can still be a useful tool in the many kinds of research that do not require accurately modeling specific brain circuits or their dysfunction, such as a recent paper by the authors that used organoids as a way to study the aggressive spread of glioblastoma brain cancer in a lab dish. "But these results are pretty clear that organoids are far from reproducing a real developing brain in the lab," the lead author said.