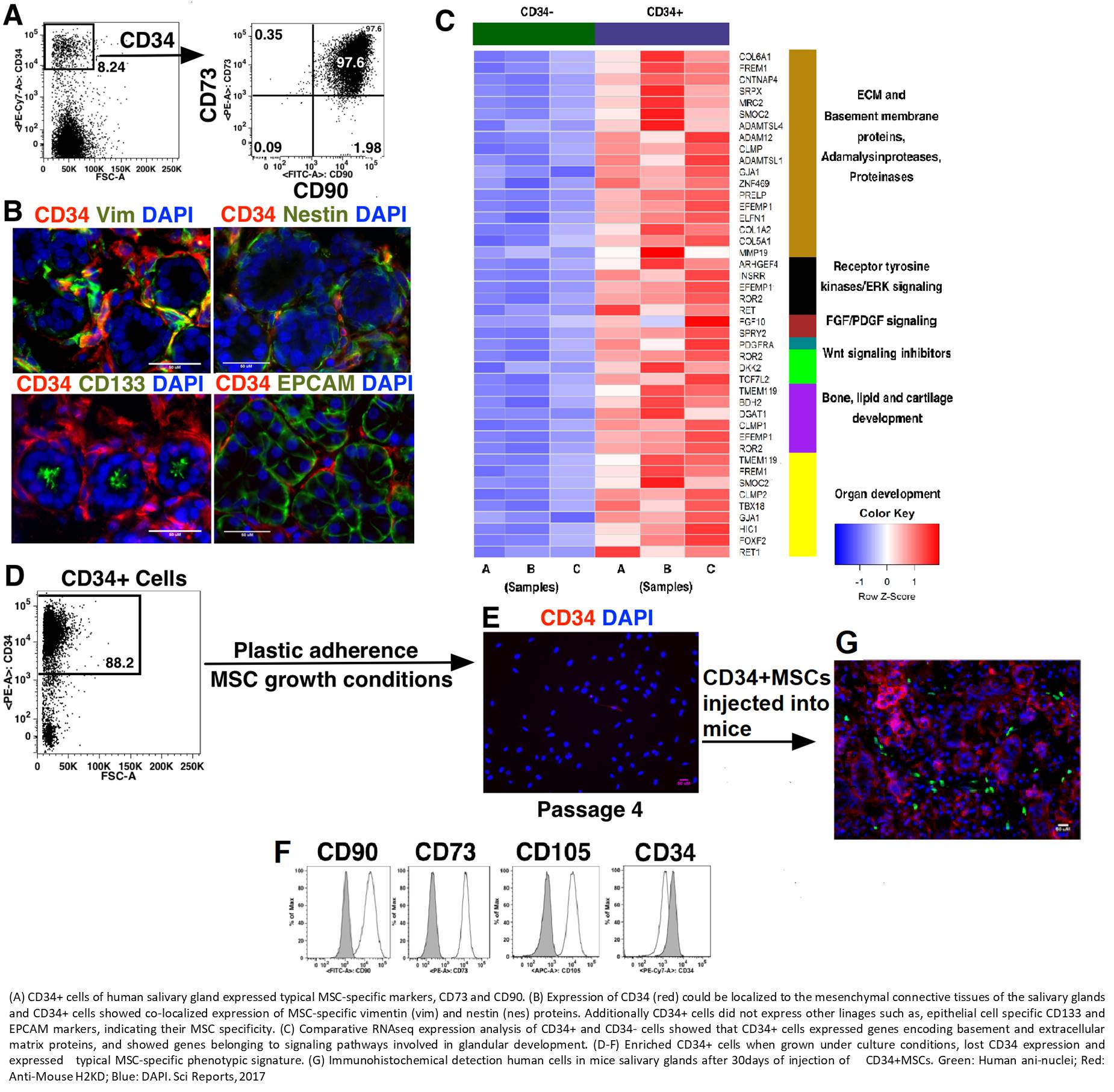 Saliva secreted from salivary glands performs a plethora of crucial functions. Impairment or disability of salivary glands to secrete saliva leads to a condition known as dry mouth syndrome or xerostomia, which can occur in individuals affected with autoimmune disorders, diabetes and stroke. However, significant episodes of salivary gland structural and functional impairments result from the radiation induced damage in the patients undergoing palliative therapy for head and neck cancers.

MSCs are specialized multipotent cells that have the ability generate cells that to repair and regenerate injured or damaged tissues and in the maintenance of cellular homeostasis. Therefore, identification and purification of a homogeneous source of MSCs from salivary glands would be helpful in devising novel cellular therapies for salivary gland disorders.

This study demonstrates that CD34, which is widely known to be expressed on hematopoietic stem cells, is present on the MSCs of salivary glands. Interestingly most of the existing studies report that CD34 to be absent on MSCs by studying mostly culture-derived MSCs. However, researchers of this study have shown that in non-cultured cells isolated from human salivary glands, CD34 was expressed on the MSCs, whereas once these cells were grown in vitro, under culture conditions, they lost the expression of CD34.

Elegant comparison of the expression of CD34 on salivary gland derived MSCs with that of most widely studied bone marrow derived MSCs showed that, CD34 was present on mostly on the hematopoietic and endothelial cells in the bone marrow, whereas they were present on the MSCs in salivary glands. So another salient finding of this work is that depending on the type of the tissues, MSCs might have different phenotypic protein expression profiles.

Additionally researchers of this work have shown that due to the organ architecture, number of MSCs were very high in human salivary glands as compared to bone marrow. Moreover, when human salivary gland derived MSCs were injected into the salivary glands of humanized mice, the MSCs migrated to the neighboring glands and survived in the mice even after 30 days of transplantation; whereas bone marrow derived MSCs could not be detected. These findings indicate that MSCs might have effective therapeutic implications if isolated and administered in a tissue-specific manner.

Overall, this study shows that CD34+ MSCs could have prospective implications as cellular sources to treat salivary gland diseases and in bioengineering of artificial glands.

Future direction of these findings would be to test the potential of transplanted CD34+ MSCs in recovering salivary gland functional impairments in mice models with inherent salivary gland damage.