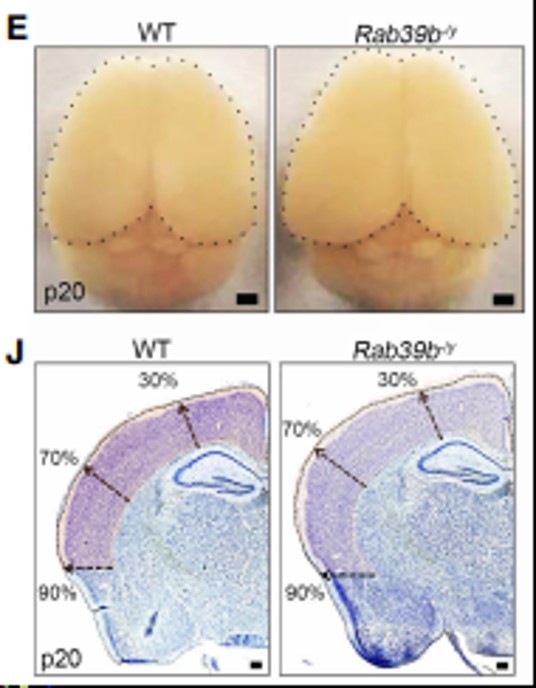 When brains begin developing, there are a lot of moving parts -- and when mutations happen in early neurodevelopment, it can lead to disorders like macrocephaly and autism. But scientists don't know much about the ways that development goes askew, particularly in humans.

From a previous study, the authors had already honed in on a particular gene -- RAB39b. They scoured the scientific literature to understand more about this gene and what it does.

RAB39b was reported as an autism spectrum disorder (ASD) risk gene, linked to the X chromosome, the author said. When this gene is mutated, it can lead to macrocephaly, ASD, intellectual disability, epilepsy and early onset Parkinson's disease. "However, the functional study of RAB39b is very limited, and the mechanism of RAB39b mutation leading to macrocephaly and ASD is not clear," the author added. The researchers were intrigued and decided to investigate.

Macrocephaly/ASD belongs to a subset of autism. The brain surface area of a baby who will develop macrocephaly/autism hyper-expands in the weeks directly before and after birth, and then continues to grow larger than normal after birth, followed by the emergence of autistic social deficits. That makes the study of brain development critical for exploring the mechanism of ASD, the author said.

The lab already had a system developed to study brain development using a mouse model and human brain organoids -- miniature brains grown artificially in the lab. These organoids emerged a decade ago as pea-sized blobs, grown from human stem cells that self-organize into brain-like structures with electrically active neurons.

They've been used to make discoveries about Zika-caused microcephaly, schizophrenia and even to test new drugs.

The author said this shows how a mutation in this gene disrupts growth and differentiation of so-called neural progenitor cells, which go on to become different brain cell types.

Mechanistic studies reveal that RAB39b interacts with PI3K components and its deletion promotes PI3K–AKT–mTOR signaling in NPCs of mouse cortex and cerebral organoids. The mTOR activity is robustly enhanced in mutant outer radial glia cells (oRGs), a subtype of NPCs barely detectable in rodents but abundant in human brains.

The research was published in the journal Genes and Development. Now that it's clear this gene has an important role in regulating new brain cell growth, the authors hope to investigate RAB39b's role in regulating neuron activity-dependent signaling networks, for further exploring the mechanism of autism spectrum disorder.