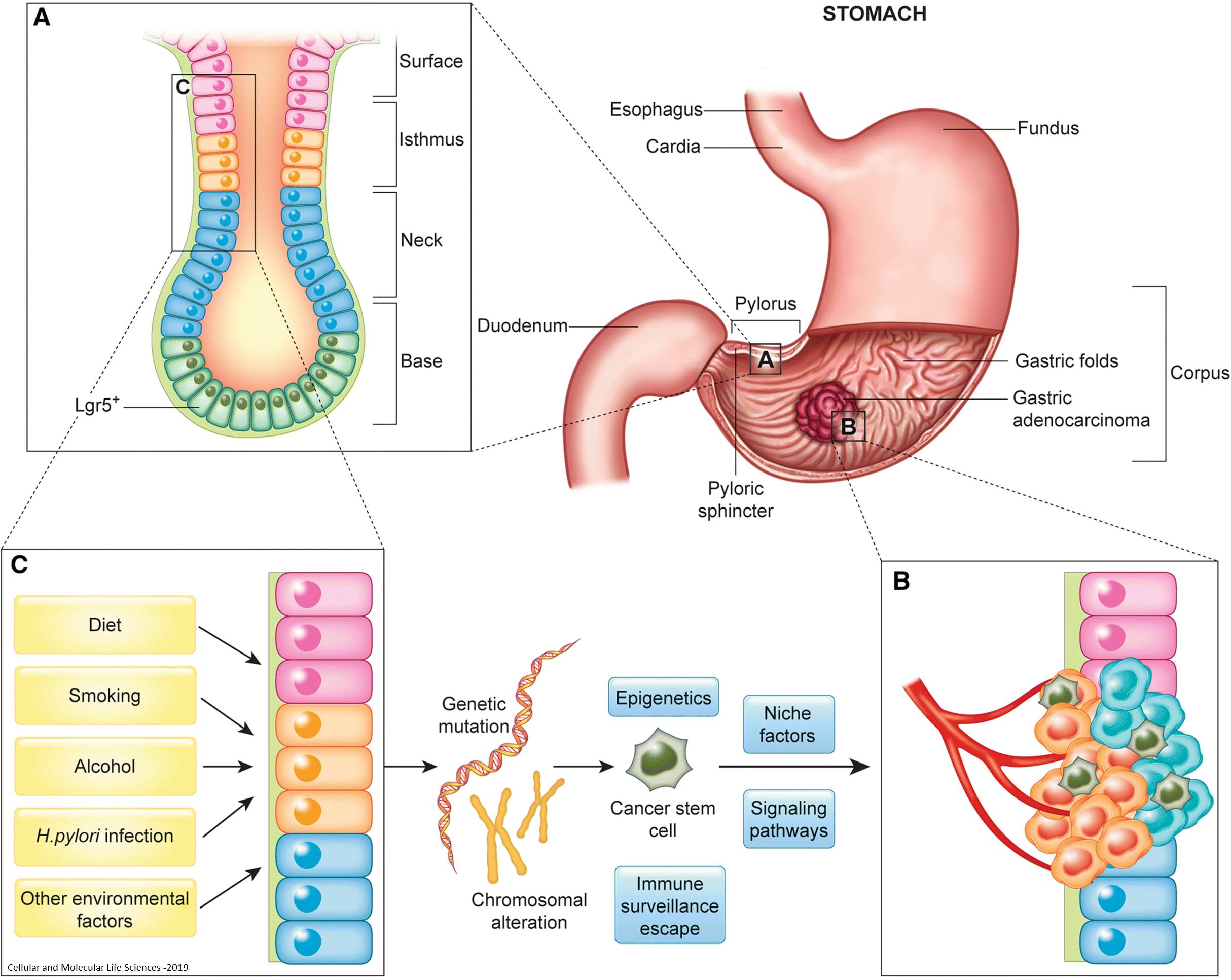 Stem cells are not only key players in tissue regeneration, they are also capable of taking direct action against bacteria. This is the finding of a study conducted by researchers, which describes what happens during a Helicobacter pylori infection of the human stomach. By actively fighting the colonizing bacteria, gastric stem cells protect themselves against damage that can lead to cancer. Results from this study have been published in Nature Cell Biology.

Approximately 50 percent of the world's population are infected with the bacterium Helicobacter pylori, the most important risk factor for gastric cancer. It colonizes the gastric epithelium and can cause DNA damage in epithelial cells. As the majority of affected cells are short-lived and replaced within a matter of days, such damage is unlikely to have serious consequences. However, the effects can be much more severe if the bacterium attacks the stem cells, which have a much longer lifespan. They are located deep inside the gastric gland and produce daughter cells destined to replace the mucosal cells at the surface. If the DNA of these stem cells is damaged by H. pylori, it may lead to the development of gastric cancer.

The researchers working on this new study were able to show that gastric stem cells employ active measures to fend off the bacteria. "Our animal model enabled us to observe that stem cells release a protein known as intelectin 1 into their surroundings," explains the study's first author. "Intelectin 1 binds to the surface of Helicobacter pylori, causing the bacteria to clump together. This stops them from entering the gastric gland cavity and damaging the stem cells located there."

The production of intelectin 1 is triggered by R-spondin 3, a signaling molecule which was previously shown to stimulate stem cell proliferation. R-spondin 3 secretion increases as soon as the body recognizes damage such as that caused by H. pylori. Rspo3 induces differentiation of basal Lgr5+ cells into secretory cells that express and secrete antimicrobial factors, such as intelectin-1, into the lumen.

The depletion of Lgr5+ cells or the knockout of Rspo3 in myofibroblasts leads to hypercolonization of the gastric glands with H. pylori, including the stem cell compartment. By contrast, systemic administration or overexpression of Rspo3 in the stroma clears H. pylori from the gastric glands. Thus, the Rspo3–Lgr5 axis simultaneously regulates both antimicrobial defence and mucosal regeneration.

Summarizing the researchers' findings, the study's senior  author, says: "The body responds to Helicobacter pylori infection by releasing a signaling molecule that stimulates the proliferation of gastric stem cells and promotes tissue regeneration. The same messenger molecule also causes neighboring gastric stem cells to release antibacterial proteins that actively protect the stem cell niche against the invasion of pathogens. This mechanism enables the body to prevent the more serious consequences of infection, such as gastric ulcers and gastric cancer."

"We hope to use our findings to identify those Helicobacter pylori-infected patients in whom this protective mechanism is out of balance," adds the senior author. "The idea is then to offer treatment options specifically to these people." The researchers suspect that these patients are at a particularly high risk of developing stomach cancer as a result of chronic Helicobacter infection. Therefore, they are planning to conduct further studies to investigate the link between stem cell-based protection mechanisms and cancer development - not just in the stomach, but throughout the gastrointestinal tract.