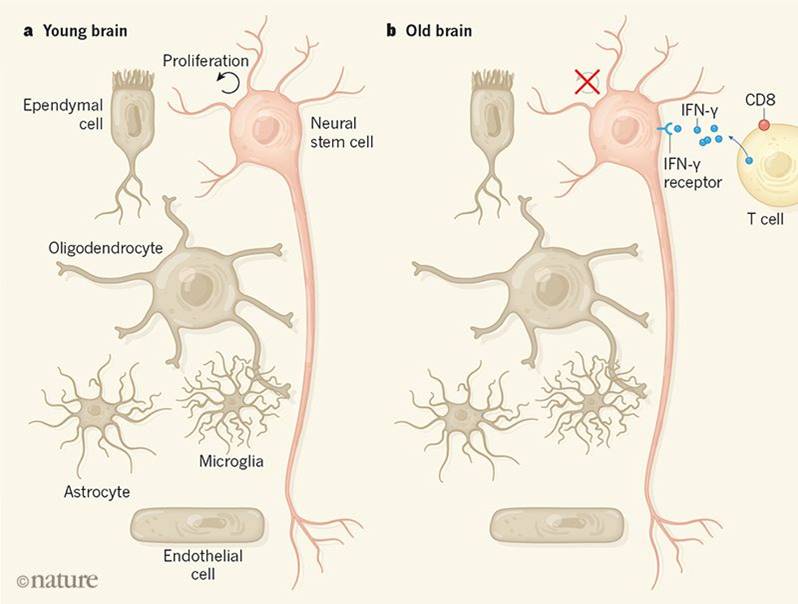 A study by investigators has revealed that immune cells infiltrate the rare newborn nerve-cell nurseries of the aging brain. There's every reason to think those interlopers are up to no good. Experiments in a dish and in living animals indicate they're secreting a substance that chokes off new nerve cell production.

While most of the experiments in the study were carried out in mice, the central finding -- the invasion, by immune cells called killer T cells, of neurogenic niches (specialized spots in the brain where new nerve cells, or neurons, are generated) -- was corroborated in tissue excised from autopsied human brains.

The findings could accelerate progress in hunting down the molecules in the body that promote the common deterioration of brain function in older individuals and in finding treatments that might stall or even reverse that deterioration. They also signify a crack in the wall of dogma that's deemed the healthy brain impervious to invasion by the body's immune cells, whose unbridled access to the organ could cause damage.

"The textbooks say that immune cells can't easily get into the healthy brain, and that's largely true," said the senior author of the study. "But we've shown that not only do they get into otherwise healthy aging brains -- including human brains -- but they reach the very part of the brain where new neurons arise."

Many a spot in a young mammal's brain is bursting with brand new neurons. But for the most part, those neurons have to last a lifetime. Older mammals' brains retain only a couple of neurogenic niches, consisting of several cell types whose mix is critical for supporting neural stem cells that can both differentiate into neurons and generate more of themselves. New neurons spawned in these niches are considered essential to forming new memories and to learning, as well as to odor discrimination.

In order to learn more about the composition of the neurogenic niche, the researchers catalogued, one cell at a time, the activation levels of the genes in each of nearly 15,000 cells extracted from the subventricular zone (a neurogenic niche found in mice and human brains) of healthy 3-month-old mice and healthy 28- or 29-month-old mice.

This high-resolution, single-cell analysis allowed the scientists to characterize each cell they looked at and see what activities it was engaged in. Their analysis confirmed the presence of nine familiar cell types known to compose the neurogenic niche. But when the authors compared their observations in the brains of young mice (equivalent in human years to young adults) with what they saw in the brains of old mice (equivalent to people in their 80s), they identified a couple of cell types in the older mice not typically expected to be there -- and barely present in the young mice. In particular, they found immune cells known as killer T cells lurking in the older mice's subventricular zone.

The healthy brain is by no means devoid of immune cells. In fact, it boasts its own unique version of them, called microglia. But a much greater variety of immune cells abounding in the blood, spleen, gut and elsewhere in the body are ordinarily denied entry to the brain, as the blood vessels pervading the brain have tightly sealed walls. The resulting so-called blood-brain barrier renders a healthy brain safe from the intrusion of potentially harmful immune cells on an inflammatory tear as the result of a systemic illness or injury.

"We did find an extremely sparse population of killer T cells in the subventricular zone of young mice," said the senior author. "But in the older mice, their numbers were expanded by 16-fold."

That dovetailed with reduced numbers of proliferation-enabled neural stem cells in the older mice's subventricular zone. Further experiments demonstrated several aspects of the killer T cells' not-so-mellow interaction with neural stem cells. For one thing, tests in laboratory dishware and in living animals indicated that killer T cells isolated from old mice's subventricular zone were far more disposed than those from the same mice's blood to pump out an inflammation-promoting substance(interferons) that stopped neural stem cells from generating new nerve cells.

Second, killer T cells were seen nestled next to neural stem cells in old mice's subventricular zones and in tissue taken from the corresponding neurogenic niche in autopsied brains of old humans; where this was the case, the neural stem cells were less geared up to proliferate.

A third finding was especially intriguing. Killer T cells' job is to roam through the body probing the surfaces of cells for biochemical signs of a pathogen's presence or of the possibility that a cell is becoming, or already is, cancerous. Such telltale biochemical features are called antigens. The tens of billions of killer T cells in a human body are able to recognize a gigantic range of antigens by means of receptors on their own surfaces. That's because every unexposed, or naïve, killer T cell has its own unique receptor shape.

When an initially naïve killer T cell is exposed to an unfamiliar antigen that fits its uniquely shaped receptor, it reacts by undergoing multiple successive rounds of replication, culminating in a large set of warlike cells all sharing the same receptor and all poised to destroy any cells bearing the offending antigen. This process is called clonal expansion.

The killer T cells found in old mice's brains had undergone clonal expansion, indicating likely exposure to triggering antigens. But the receptors on those killer T cells differed from the ones found in the old mice's blood, suggesting that the brain-localized killer T cells hadn't just traipsed through a disrupted blood-brain barrier via passive diffusion but were, rather, reacting to different, possibly brain-based, antigens.

The group is now trying to determine what those antigens are. "They may bear some responsibility for the disruption of new neuron production in the aging brain's neurogenic niches," the senior author said.