Making transplanted stem cells stick around and do their jobs 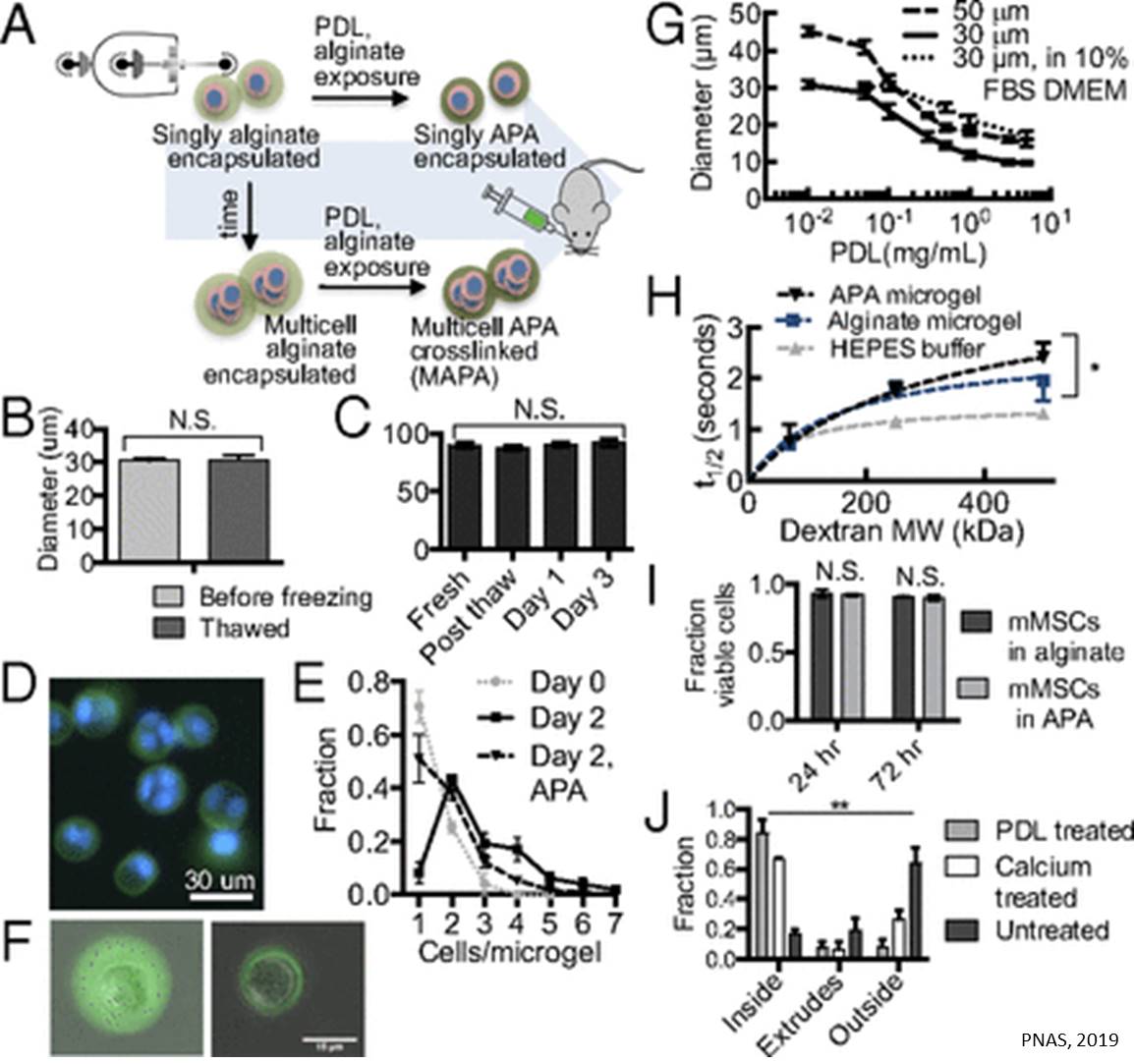 Bone marrow transplants of hematopoietic stem cells have become standard treatment for a host of conditions including cancers of the blood and lymphatic systems, sickle cell anemia, inherited metabolic disorders, and radiation damage. Unfortunately, many bone marrow transplants fail due to rejection by the patient's immune system or graft-versus-host disease (in which the transplanted marrow cells attack the patient's healthy cells), both of which can be fatal.

Mesenchymal stem cells (MSCs) are known to secrete compounds that modulate the immune system and have shown promise in mitigating these problems in animal trials. However, clinical results with MSCs have been disappointing thus far, as they are rapidly cleared from the body and can draw attack from patients' immune systems, and efforts to encapsulate MSCs in protective biomaterials have resulted in large, bulky hydrogels that cannot be given intravenously and compromise the cells' functions.

In a scientific first, researchers demonstrate a single-cell encapsulation technology that effectively protects transplanted MSCs from clearance and immune attack and improves the success of bone marrow transplants in mice. The work is published in PNAS.

"To our knowledge, this is the first example of single-cell encapsulation being used to improve cell therapies, which are becoming more widespread as treatments for a number of diseases," said first author. "And, our encapsulated cells can be frozen and thawed with minimal impact on the cells' performance, which is critical in the context of hospitals and other treatment centers."

This advance builds on a method the team previously developed that uses a microfluidic device to coat individual living cells with a thin layer of an alginate-based hydrogel, creating what they term "microgels." The process encapsulates cells with 90% efficiency, and the resulting microgels are small enough that they can be delivered intravenously, unlike the bulky hydrogels created by other methods. When injected into mice, MSCs encapsulated using this technique remained in the animals' lungs ten times longer than "bare" MSCs, and remained viable for up to three days.

Because a large amount of MSCs' clinical appeal lies in their secretion of compounds that modulate the body's immune system, the researchers needed to test how microgel encapsulation affects MSCs' ability to function and resist immune attack.

They modified their original alginate microgel by adding another compound that cross-links to the alginate and makes the microgel stiffer and better able to resist the body's immune system and clearance mechanisms. They also cultured the MSCs after encapsulation to encourage them to divide and produce more cells. When these new microgels were injected into mice, their persistence increased five-fold over the previous microgel design and an order of magnitude over bare MSCs.

To induce an immune response against the MSCs, the team incubated encapsulated cells in a medium containing fetal bovine serum, which is recognized by the body as foreign, before introducing them into mice. While the clearance rate of the encapsulated MSCs was higher than that observed without immune activation, it was still five times lower than that of bare MSCs. The microgels also outperformed bare MSCs when injected into mice that had a preexisting immune memory response against MSCs, which mimics human patients who are given multiple infusions of stem cells.

MSCs exposed to inflammatory cytokines respond by increasing their expression of immune-modulating genes and proteins, so the researchers next tested whether encapsulation in their new microgels impacted this response. They found that bare and encapsulated MSCs had comparable levels of gene expression when exposed to the same cytokines, demonstrating that the microgels did not impair MSC performance.

For their pièce de résistance, the team injected their MSC-containing microgels into mice along with transplanted bone marrow, half of which was immune-compatible with the recipient mouse and half of which was allogeneic, or an immune mismatch. Mice that received encapsulated MSCs had more than double the fraction of allogeneic bone marrow cells in their marrow and blood after nine days compared with mice that did not receive MSCs. Encapsulated MSCs also led to a greater degree of engraftment of the allogeneic cells into the host bone marrow compared to bare MSCs.

"One of the strong points of this work is that it uses a completely non-genetic approach to dramatically increase cell survival in transplant contexts, where it's sorely needed," said the senior author. "This technology nicely complements genetic engineering approaches, and in fact could be more efficient than attempting to directly modify immune cells themselves."

How unwanted cells are eliminated during embryogenesis