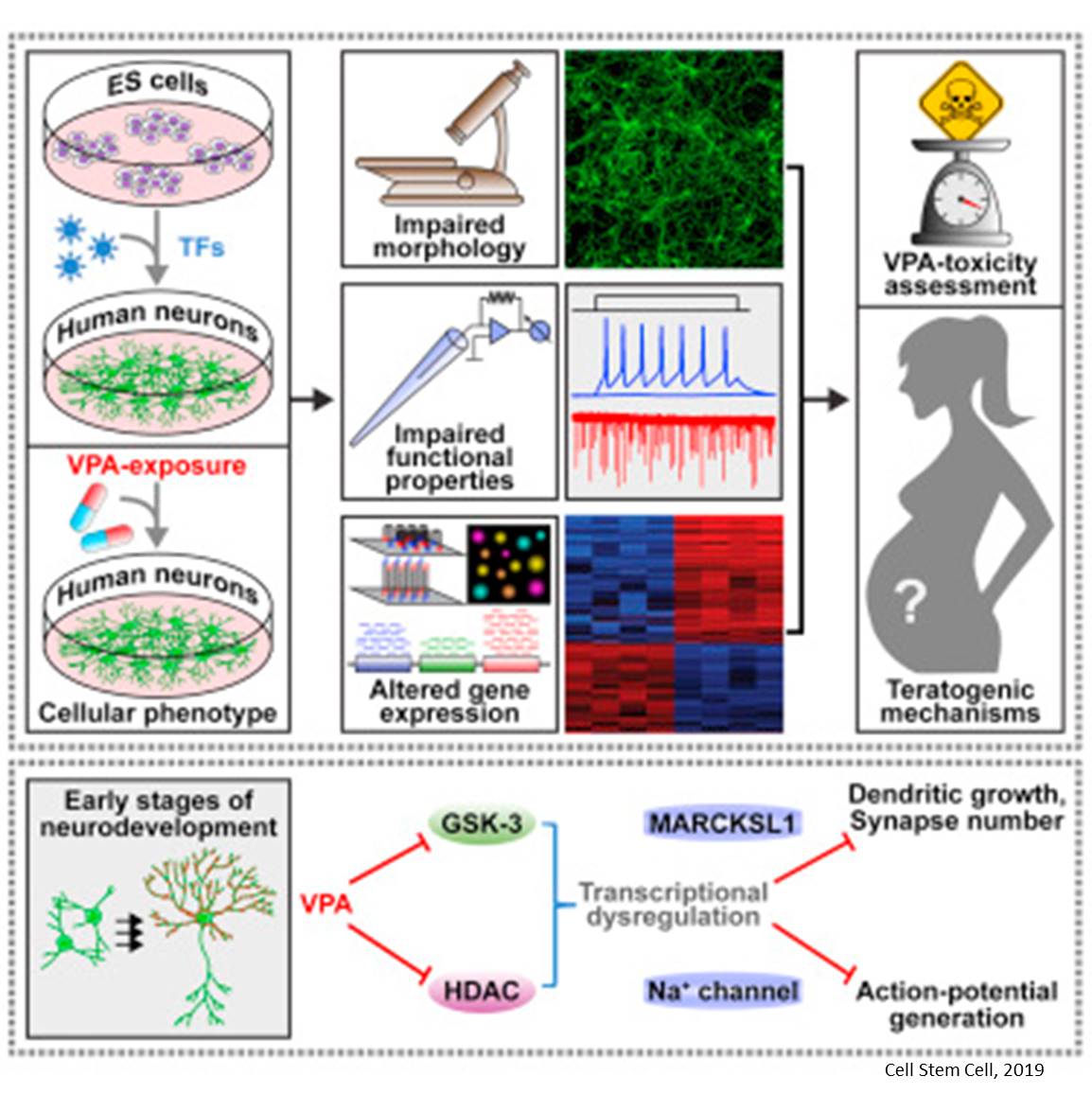 Pregnant women are often advised to avoid certain drugs because of potential risks to their unborn infant's growing brain cells. Such risks are difficult to pinpoint, though, because there are few ways to track the cellular mechanisms of a drug while the fetus is developing.

Researchers designed a new experimental system that can rapidly assess the pathogenic effects of a drug on a baby's developing brain. The system uses embryonic stem cells reprogrammed into neurons, offering a powerful tool for probing genetic and molecular underpinnings of drug-induced neurodevelopmental disorders. The knowledge gained from this new method could be harnessed to uncover unknown drug risks, as well as preventive therapies.

The paper in Cell Stem Cell describes a model in vitro platform demonstrating the use of reprogrammed stem cells to systematically deconstruct how a drug can disrupt neuronal development. The researchers provided proof-of-concept of their experimental platform by observing the effects of valproic acid, a commonly prescribed drug that treats epileptic seizures and is also associated with fetal brain issues.

The senior author explained that attributing certain phenotypes to different neurodevelopmental stages is extremely challenging in a living (in vivo) system. That's because during normal development, neurons don't all generate in lockstep at the same time; thus it's difficult to distinguish between a developing vs. mature neuron.

With the reprogrammed stem cells, the entire neuronal population is "phase-locked" in early development stages, gradually becoming mature in a synchronous manner. "This gives you a great advantage so that when you expose them to teratogenic drugs, you see the clear effects at early vs. late maturation stages," the senior author said. Teratogenic drugs are any that disturb the development of an embryo or fetus.

Using this system, the researchers definitively showed that valproic acid has profoundly divergent effects on early- vs. late-stage neuronal development. When neurons were still immature, the drug exposure induced changes in gene expression that led to severe impairments in how the brain cells were shaped, and how they functioned. In particular, they found that these pathogenic effects were largely mediated by a reduced cellular level of the MARCKSL1 protein, which is essential for guiding the structural maturation of newly born neurons. The drug caused no ill effects in mature neurons.

The chief aim with the project was to test the efficacy of reprogrammed neurons as an in vitro model for human neurodevelopment, and to prepare this platform to test cellular effects of many different drugs and their consequences.

"Our major goal is to understand the fundamental mechanisms of how neurons develop their morphological and functional properties, and how different molecules contribute to this process," the senior author said.