New roles of autophagy in stem cell renewal and differentiation 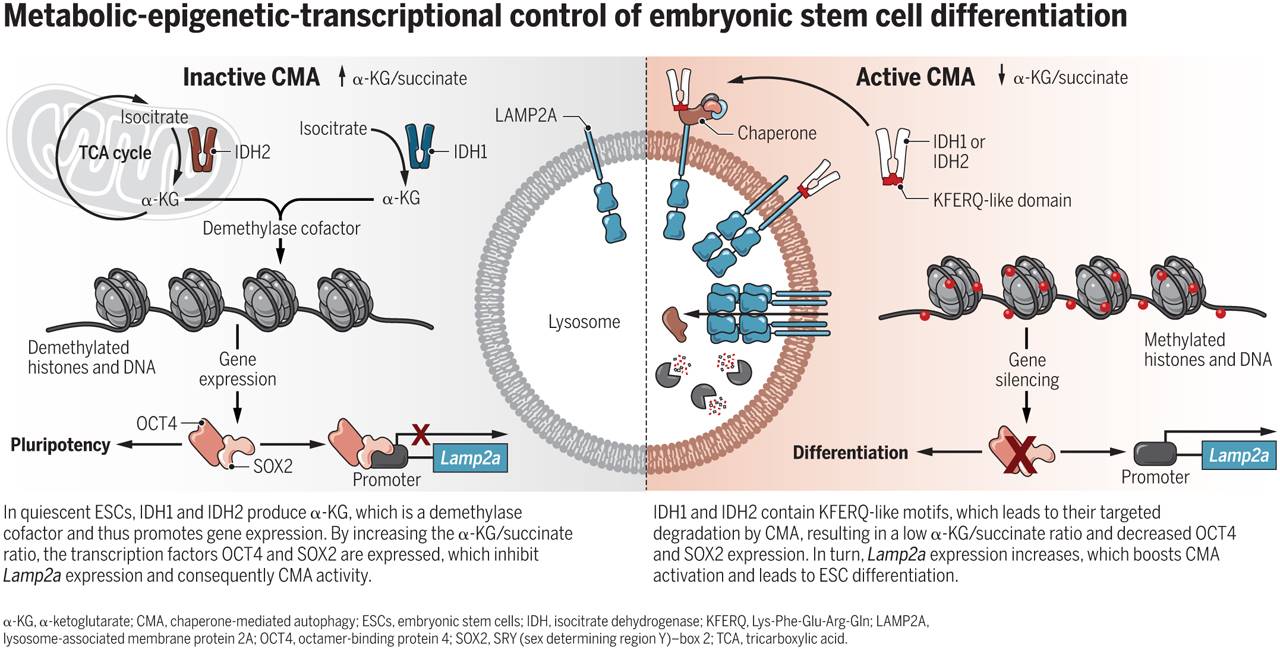 The self-eating process in embryonic stem cells known as chaperone-mediated autophagy (CMA) and a related metabolite may serve as promising new therapeutic targets to repair or regenerate damaged cells and organs, The researchers show in a new study published online in Science.

Human bodies contain over 200 different types of specialized cells. All of them can be derived from embryonic stem (ES) cells, which relentlessly self-renew while retaining the ability to differentiate into any cell type in adult animals, a state known as pluripotency. Researchers have known that the cells' metabolism plays a role in this process; however, it wasn't clear exactly how the cells' internal wiring works to keep that state and ultimately decide stem cell fate.

The new preclinical study, for the first time, shows how the stem cells keeps CMA at low levels to promote that self-renewal, and when the stem cell is ready, it switches that suppression off to enhance CMA, among other activities, and differentiate into specialized cells.

"It's an intriguing discovery in the field of stem cell biology and for researchers looking to develop therapies for tissue or organ regeneration," said senior author. "We reveal two novel ways to potentially manipulate the self-renewal and differentiation of stem cells: CMA and a metabolite, known as alpha-ketoglutarate, that is regulated by CMA. Rationally intervening or guiding these functions could be a powerful way to increase the efficiency of regenerative medicine approaches."

Autophagy is a cell-eating mechanism necessary for survival and function of most living organisms. When cells self-eat, the intracellular materials are delivered to lysosomes, which are organelles that help break down these materials. There are a few forms of autophagy. However, unlike the other forms, which are present in all eukaryotic cells, CMA is unique to mammals. To date, the physiological role of CMA remains unclear.

Using metabolomic and genetic laboratory techniques on the embryonic stem cells of mice, the researchers sought to better understand significant changes that took place during their pluripotent state and subsequent differentiation.

They found that CMA activity is kept at a minimum due to two cellular factors critical for pluripotency--Oct4 and Sox2--that suppresses a gene known as LAMP2A, which provides instructions for making a protein called lysosomal associated membrane protein-2 necessary in CMA. The minimal CMA activity allows stem cells to maintain high levels of alpha-ketoglutarate, a metabolite that is crucial to reinforce a cell's pluripotent state, the researchers found.

Embryonic stem cells are often called pluripotent due to their remarkable ability to give rise to every cell type in the body, except the placenta and umbilical cord. Embryonic stem cells not only provide a superb system to study early mammalian development, but also hold great promise for regenerative therapies to treat various human disorders. The development of stem-cell based regenerative medicine therapies has rapidly increased in the last decade, with several approaches in studies shown to repair damaged heart tissue, replace cells in solid organ transplantation, and in some cases address neurological disorders.

"This newly discovered role of autophagy in the stem cell is the beginning of further investigations that could lead to researchers and physician-scientists to better therapies to treat various disorders," the senior author said.