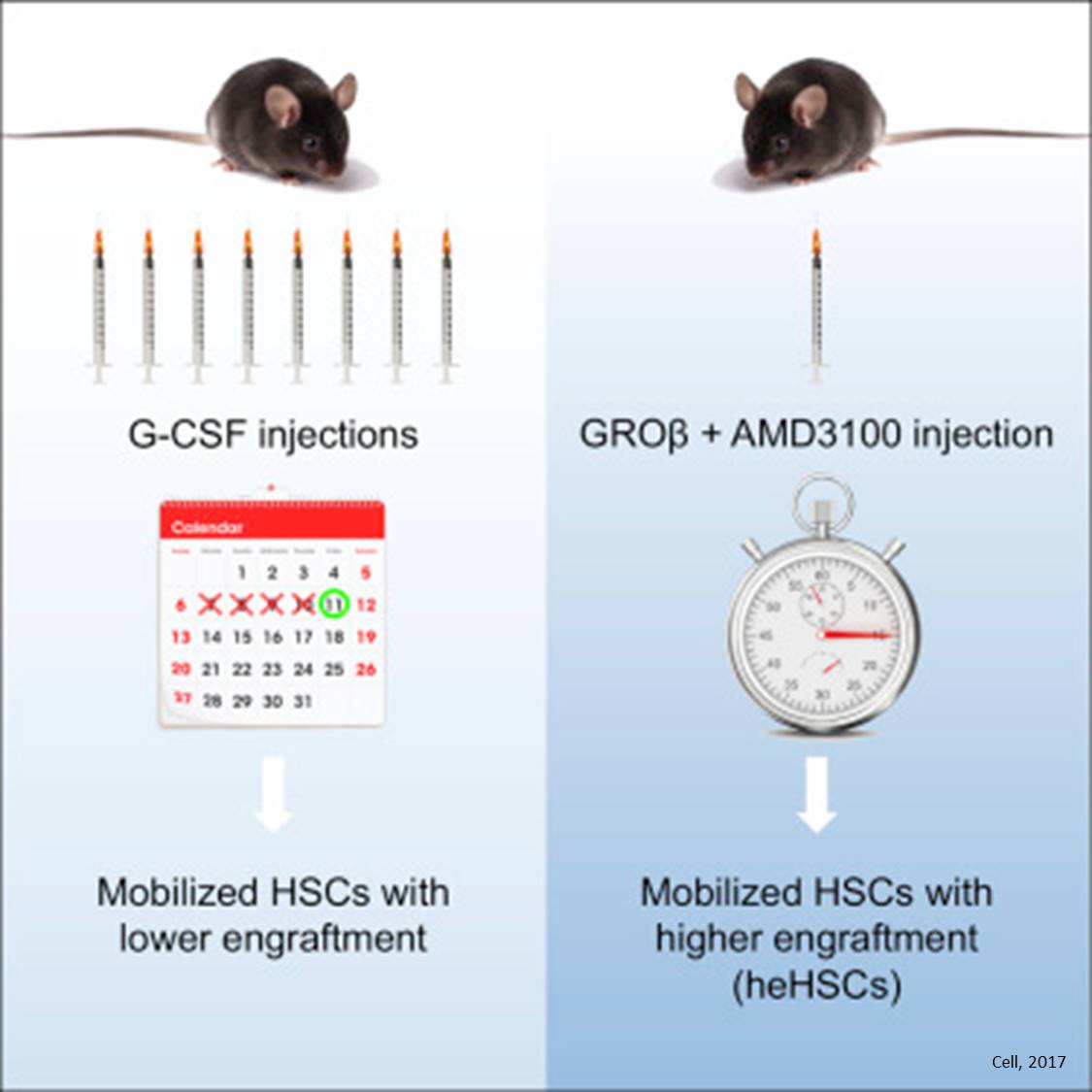 A new method of harvesting stem cells for bone marrow transplantation - developed by a team of investigators appears to accomplish two goals: making the donation process more convenient and less unpleasant for donors and providing cells that are superior to those acquired by current protocols. Results of the team's studies in animal models and humans will appear in the journal Cell.

"Our new method of harvesting stem cells requires only a single injection and mobilizes the cells needed in 15 minutes; so in the time it takes to boil an egg, we are able to acquire the number of stem cells produced by the current standard five-day protocol," says lead author . "This means less pain, time off work and lifestyle disruption for the donor; more convenience for the clinical staff, and more predictability for the harvesting procedure."

Currently, the most common way of harvesting hematopoietic (blood system) stem cells requires donors to receive daily injections of a drug called G-CSF, which induces stem cells to pass from the bone marrow into the circulation. After five days of injections - which can produce adverse effects ranging from bone pain, to nausea and vomiting, to enlargement or rupture of the spleen - the stem cells are collected through the bone marrow donation process of apheresis, which takes four to five hours. Sometimes more than one apheresis is required to collect enough stem cells, particularly when patients with conditions like multiple myeloma or non-Hodgkin's lymphoma are donating their own cells.

In other previous work, the team had found that a protein called GRO (growth regulated oncogene)-beta induced rapid movement of stem cells from the marrow into the blood in animal models. Initial experiments by the current study's team revealed that GRO-beta injections were safe and well tolerated in human volunteers but had only a modest effect in mobilizing stem cells. As a result, they tried combining administration of GRO-beta with AMD3100, a drug that is already approved to increase stem cell mobilization in combination with G-CSF, and found that simultaneous administration of both drugs rapidly produced a quantity of cells equal to that provided by the five-day G-CSF protocol.

In addition to determining the mechanisms by which combined administration of GRO-beta and AMD3100 produced enough stem cells so quickly, the team found that transplantation with these cells led to faster reconstitution of bone marrow and recovery of immune cell populations in mouse models. The stem cells produced by this procedure also show patterns of gene expression similar to those of fetal hematopoietic stem cells (HSCs), which are located in the liver, rather than the bone marrow.

"These highly engraftable hematopoietic stem cells produced by our new strategy are essentially the A+ students of bone marrow stem cells," says the senior author. "Finding that they express genes similar to those of fetal liver HSCs, the blood-producing cells you have before birth, suggests that they will be very good at moving into an empty bone marrow space and rapidly dividing to fill the marrow and produce blood. Now we need to test the combination in a clinical trial to confirm its safety and effectiveness in humans."