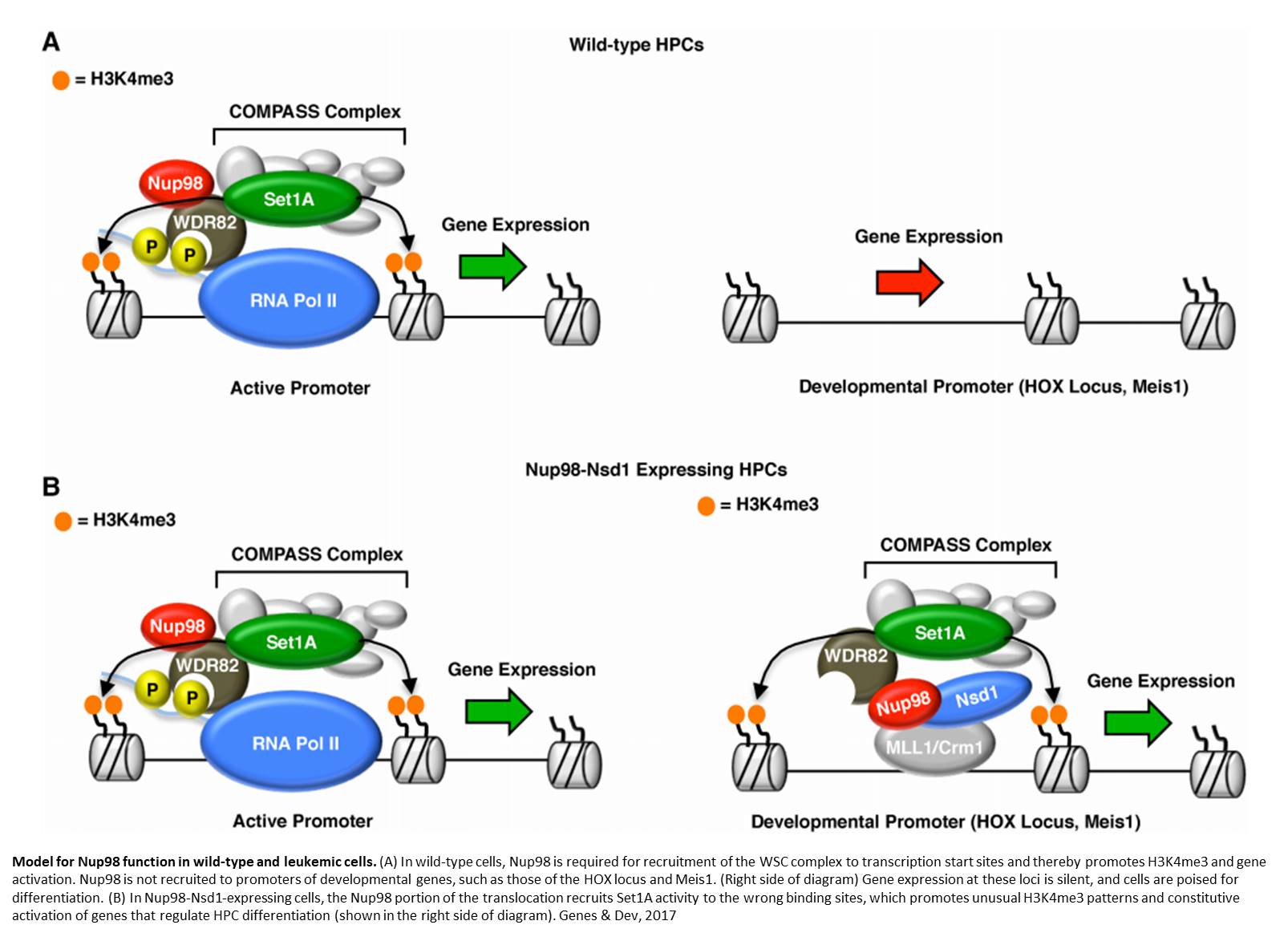 There are about 30 proteins in the nucleoporin family, and they carry out a number of different functions in addition to forming the nuclear pore. Several of them are known to act as transcription factors: This means they help to regulate when and how genes get translated into proteins.

In a new finding, a team of investigators has uncovered in mouse cells a previously unknown job for a protein called nup98. In addition to helping control the movement of molecules in and out of the nucleus of the cell, they found that it also helps direct the development of blood cells, enabling immature blood stem cells to differentiate into many specialized mature cell types. Further, they discovered the mechanism by which--when perturbed--this differentiation process can contribute to the formation of certain types of leukemia. The findings are published in Genes & Development.

Nup98 binds predominantly to transcription start sites to recruit the Wdr82–Set1A/COMPASS (complex of proteins associated with Set1) complex, which is required for deposition of the histone 3 Lys4 trimethyl (H3K4me3)-activating mark.

Depletion of Nup98 or Wdr82 abolishes Set1A recruitment to chromatin and subsequently ablates H3K4me3 at adjacent promoters. Furthermore, expression of a Nup98 fusion protein implicated in aggressive AML causes mislocalization of H3K4me3 at abnormal regions and up-regulation of associated genes.

The finding that nup98 has this additional function was not entirely unexpected. Earlier research from lab had found that it plays a role in gene regulation in other cell types. But the team didn't know about its function in hematopoietic (blood) cells.

In addition, until now the mechanism of how nup98 regulates transcription was not known. The investigators found that it acts through a link with a protein complex called Wdr82-Set1/COMPASS, which is part of the cell's epigenetic machinery. "This epigenetic process helps to control when genes are transcribed into proteins and when transcription is blocked," says the senior author.

Another thing that was different about this study is that it was done in mouse cells rather than simpler model organisms like yeast and fruit flies. "This is the first mechanistic insight of how one of these nup proteins works in mammals," senior author adds. "We have only touched the surface here in uncovering how this evolutionarily conserved mechanism works in mammalian cells." Future work in his lab will extend the study of nup98 to primates and humans.