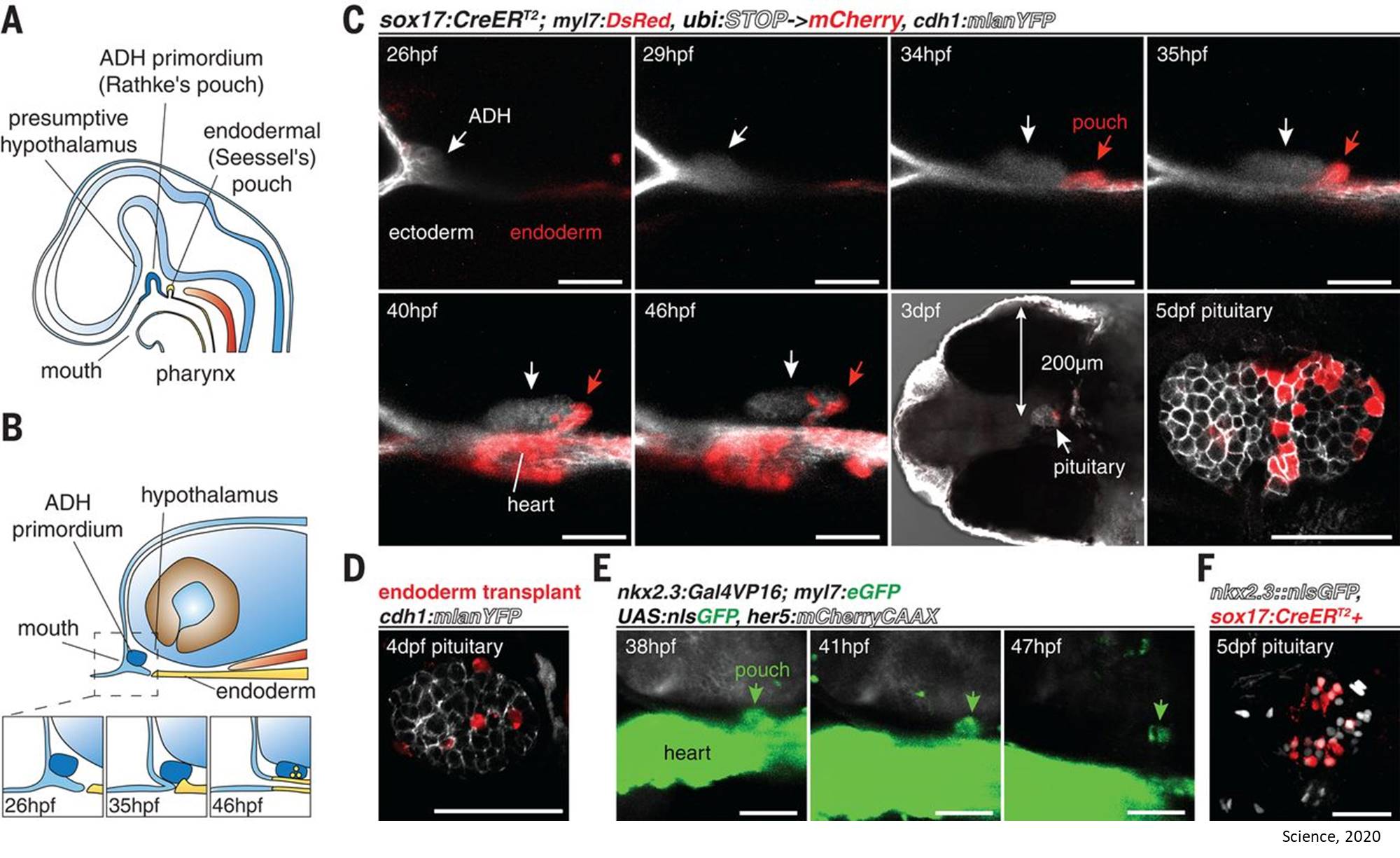 A new study suggests a change to the developmental -- and evolutionary -- story of the pituitary gland.

The pea-sized gland, nestled at the base of the brain, produces hormones that drive growth, aggression, sexual development and reproduction. For decades, the front lobe of the pituitary -- where the hormones are made -- was thought to be an evolutionary development that arose in vertebrates, along with the ear, the nose and the lens of the eye.

The widely accepted "new head hypothesis" holds that all of these body parts derive from a particular type of embryonic structure located in the ectoderm, or outermost layer of an embryo. Meanwhile, animals that have spinal cords but lack backbones, understood to represent an earlier evolutionary step, have a pituitary-like structure previously thought to have a distinct origin in the innermost embryonic layer, or endoderm.

In a paper published in Science, the researchers present evidence that, in some vertebrates, the endoderm also forms part of the pituitary's front lobe -- an idea that has been the subject of scientific controversy dating back more than 100 years. Findings from the study suggest that the gland may have a longer evolutionary history than previously thought.

"We revisited very old observations with cutting-edge technology that proves this idea that there is an endodermal contribution to the pituitary," said senior author. "Our work revises ideas about what kind of embryonic structure the pituitary is, and when it first evolved."

The authors  studied zebrafish, a species useful as a lab model in part because their development is an open book to researchers; eggs are fertilized externally and embryos are nearly see-through. The research team used new lab methods of their own invention to label the zebrafish's embryonic cells and follow the cells that descended from them through adulthood.

Additionally, they used time-lapse imaging with a powerful microscope and single-cell RNA sequencing. That latter technology is related to DNA sequencing, but instead of characterizing the entire genetic code, it reveals only the genes that are expressed, and in what quantities, for each of thousands of cells at a time -- a powerful way of understanding the nature of the cells being studied.

In a series of experiments with time-lapse imaging of zebrafish embryos, the team documented Rathke's pouch, a structure from the outer layer previously believed to be the sole source of the pituitary's front lobe, fusing with Seessel's pouch, a structure from the inner layer. Their observations indicate that the endoderm was responsible for about 20 percent of the cells in the front lobe of the pituitary.

Another experiment tracking the fate of embryonic cells into adult zebrafish showed a mixture of ectodermally and endodermally derived cells in the pituitary. Delving into gene expression with RNA sequencing, the scientists found that cells from the inner endoderm layer ended up differentiating into all of the major types of hormone-producing cells in the pituitary. Furthermore, in genetically manipulated zebrafish embryos that lacked the ectodermal component , endodermal cells could form a pituitary-like structure on their own, albeit much smaller than the normal pituitary.

Taken together, these investigations clearly demonstrate an endodermal contribution to the zebrafish pituitary. This unexpected revelation suggests that the quasi-pituitary seen in certain more-primal nonvertebrate animals -- undersea creatures that are strange and largely obscure -- may have survived, in a form, among at least some of their backbone-bearing evolutionary descendants.

For researchers in the early 20th century (and more or less ever since), there were no good ways to further explore the relation between the two embryonic structures, and thus the possibility of an endodermal contribution to the pituitary. Hotly debated at first, the topic eventually faded into more of a historical curiosity.

Fortunately, first author was well-versed in this precedent. While trying out one of those new techniques for labeling and tracking embryonic cells, the author noticed endodermal cells in the pituitary. A light bulb went off in the head.

"It was a serendipitous discovery," the author said. "We're interested in the endoderm in general, but we hadn't set out to study the pituitary. Because this was such an unexpected observation, we really had to prove it with multiple lines of investigation."