Rapid brain growth in autism is linked to DNA damage 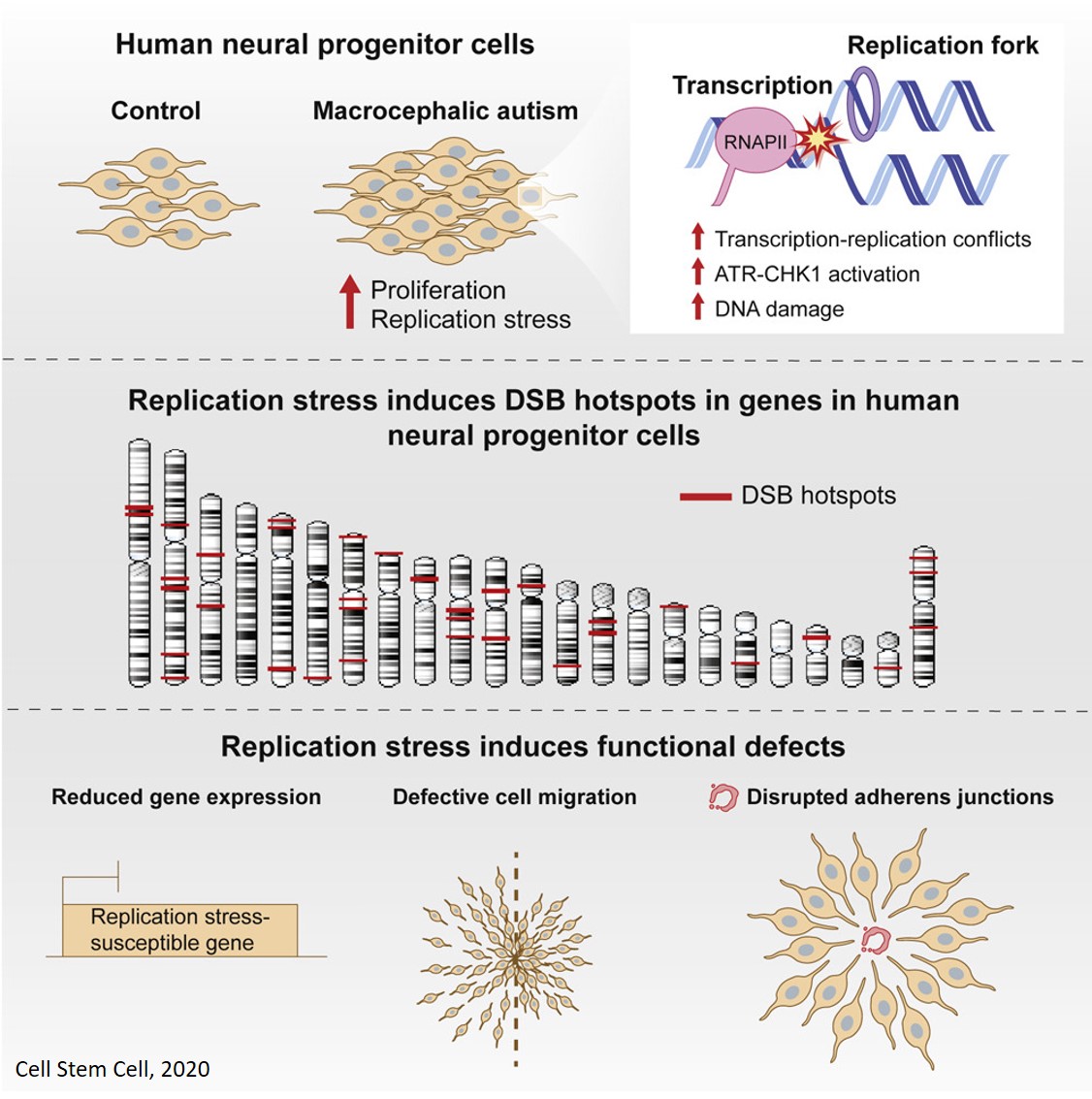 Researchers have discovered a unique pattern of DNA damage that arises in brain cells derived from individuals with a macrocephalic form of autism spectrum disorder (ASD). The observation, published in the journal Cell Stem Cell, helps explain what might go awry in the brain during cell division and development to cause the disorder.

"Division, or replication, is one of the most dangerous things that a cell can do," says the study's senior author. "Most DNA damage is repaired through a remarkably efficient repair process, but errors occur when the rate of division is altered genetically or environmentally, which can lead to long term functional defects."

ASD, a developmental disorder of communication and behavior, affects about 1 in 59 children in the US, according to the Centers for Disease Control and Prevention. Research into the underlying causes of the disorder, as well as possible treatments, has been slow.

In 2016, the authors discovered that brain stem cells from people with the macrocephalic form of autism grew more quickly than cells from unaffected individuals. (Brain stem cells are precursors to more-specialized types of cells, such as neuron

In the new research, they again looked at these neural precursor cells (NPCs). As all cell types proliferate and mature during embryonic development, it's normal for their quickly-replicating strands of DNA to accumulate small errors, most of which are corrected and never do any harm. The researchers wondered whether this DNA damage that occurred during the stress of replication was more common in the quickly dividing neural precursors of people with autism.

The researchers collected skin cells from individuals with both ASD and macrocephaly, as well as from neurotypical individuals (without ASD), and used stem-cell reprogramming technology to coax each person's cells into NPCs.

The team used a chemical compound to induce replication stress on the NPCs derived from people without autism and studied where DNA damage was most likely to accumulate. They compared this induced damage in cells from individuals without autism to where DNA damage naturally accumulated in the cells from people with autism. The NPCs from autistic individuals had heightened levels of DNA damage, clustered in 36 of the same genes that had also been damaged in healthy cells exposed to replication stress. And 20 of the genes had been previously linked to autism in separate genetic studies.

"What the new results are telling us is that cells from people with macrocephalic autism not only proliferate more but naturally experience more replication stress," says the first author of the new paper.

Fast proliferation of NPCs may lead to both macrocephaly and cellular stress that spurs DNA damage, the author says. That damage could be one source of mutations associated with ASD. While the technology used in the study told the researchers where DNA damage occurred, they don't know how much of that damage was repaired before cells matured into adult neurons and how much of it leads to lasting mutations.

"We'd like to look deeper at how replication stress and DNA damage affects neuronal function in the long term and whether adult neurons arising from these stem cells have more mutations than usual," says the author.