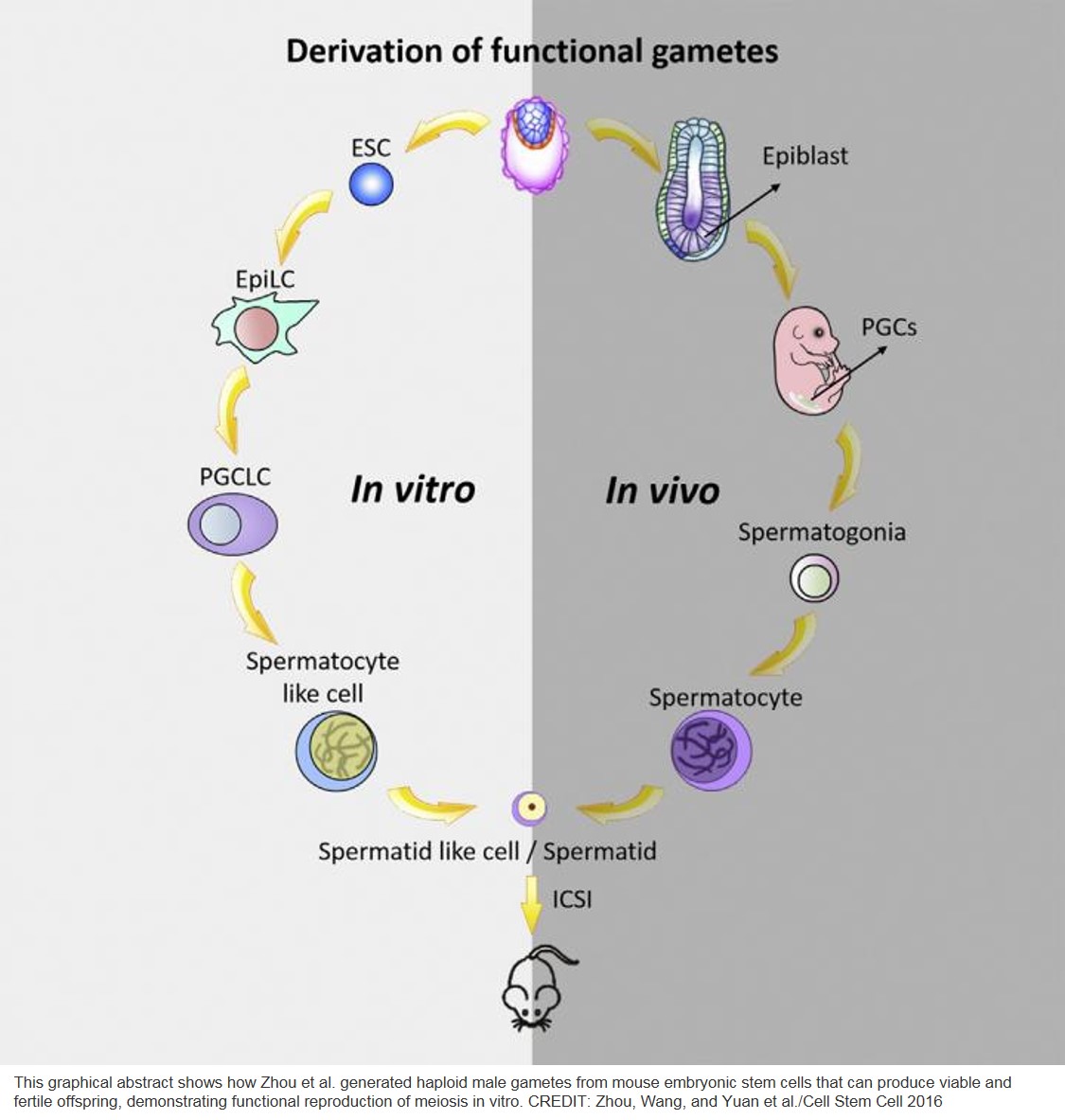 Scientists in China have finally succeeded in creating functioning sperm from mice in the laboratory. To accomplish this feat, the researchers coaxed mouse embryonic stem cells to turn into functional sperm-like cells, which were then injected into egg cells to produce fertile mouse offspring. The work, reported in Cell Stem Cell, provides a platform for generating sperm cells that could one day be used to treat male infertility in humans.

Infertility affects up to 15% of couples, and about one-third of cases can be traced to the man. One major cause of male infertility is the failure of precursor germ cells in the testes to undergo a type of cell division called meiosis to form functional sperm cells. Several studies have reported the successful generation of germ cells from stem cells, but they did not fully evaluate the functionality of the germ cells or provide proof for all key hallmarks of meiosis.

Recently, a panel of reproductive biologists proposed gold standard criteria to prove that the major events of meiosis have taken place in engineered germ cells. For example, researchers must show evidence of the correct nuclear DNA content at specific meiotic stages, normal chromosome number and organization, and the capacity of germ cells to produce viable offspring. Until now, the recapitulation of all of the essential steps of meiosis has remained a major obstacle to the production of functional sperm and egg cells in a dish.

To overcome this hurdle researchers developed a stem cell-based method that fully recapitulates meiosis and produces functional sperm-like cells. The first step was to expose mouse embryonic stem cells (ESCs) to a chemical cocktail, which coaxed the ESCs to turn into primordial germ cells. Next, the researchers mimicked the natural tissue environment of these precursor germ cells by exposing them to testicular cells as well as sex hormones such as testosterone.

Under these biologically relevant conditions, the ESC-derived primordial germ cells underwent complete meiosis, resulting in sperm-like cells with correct nuclear DNA and chromosomal content. To provide final gold-standard proof of meiosis, the researchers injected these sperm-like cells into mouse egg cells and transferred the embryos into female mice. Remarkably, these embryos developed normally and gave rise to healthy, fertile offspring, which gave birth to the next generation.

In future studies, the researchers plan to use their platform to examine the molecular mechanisms controlling meiosis. They will also test their approach in other animals such as primates in anticipation of human studies. However, before this technique is translated to the clinic, possible risks must be ruled out and ethical concerns regarding the use of embryonic cells should be considered.