Stem cells of worms and humans more similar than expected 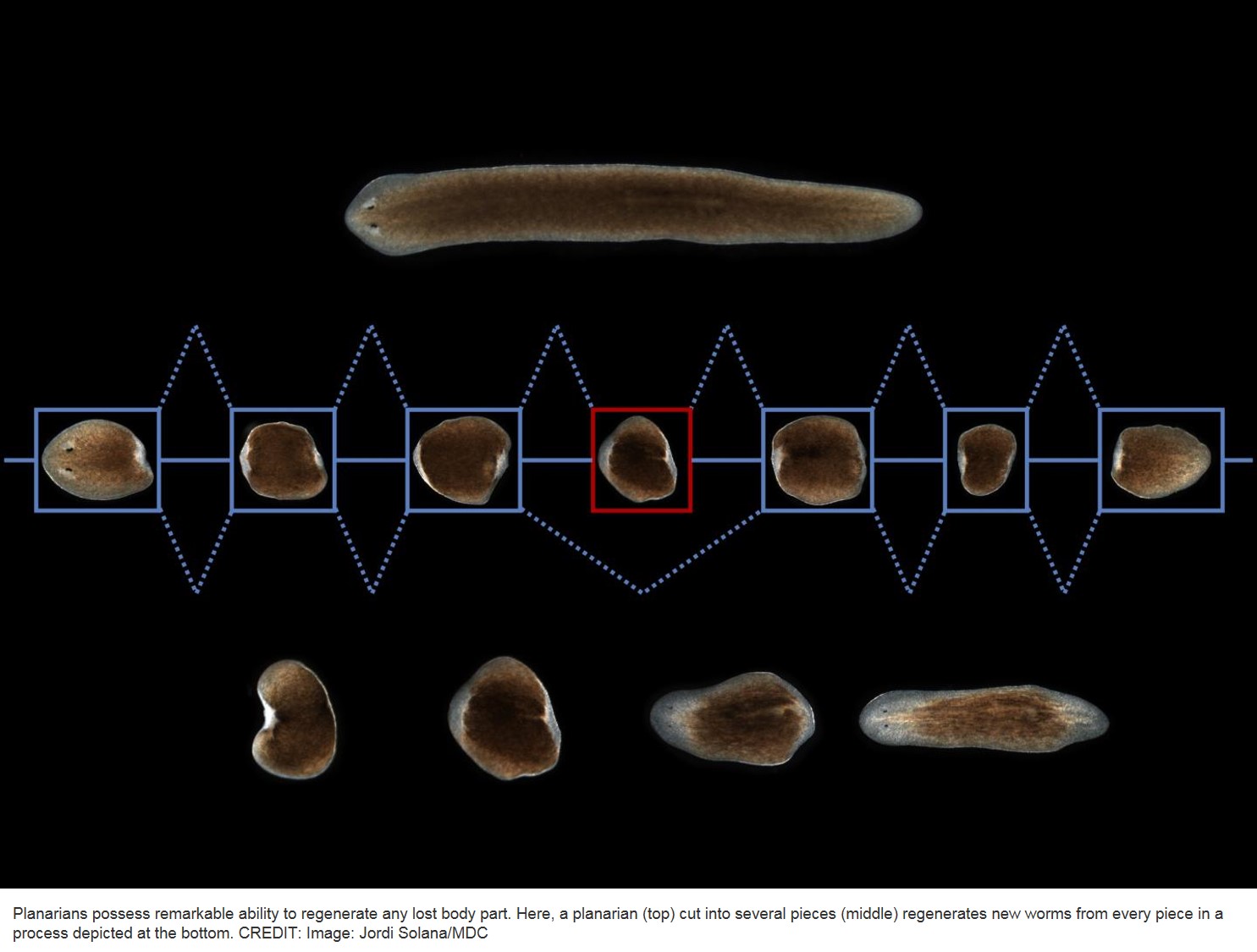 The transient form of genetic information, the RNA, is processed in a similar manner in the cells of both organisms. These mechanisms seem to be at work throughout the whole animal kingdom. Scientists showed this in a genome-wide study on flatworms whose results have now been published in the scientific journal eLife.

Stem cells are cellular all-rounders and can differentiate into any tissue. They hold great potential for regenerative medicine, which is why they are subject to intense study. Planarians, small free-living flatworms, are especially interesting for researchers due to their remarkable ability to regenerate any lost body part through their many stem cells.

The specific activation of certain genes is responsible for the special abilities of stem cells. Genes are transcribed into the transient RNA format, which in turn serves as a blueprint for proteins. Additionally, the RNA is usually processed through a mechanism called "splicing": sections of the RNA are recombined anew, and so-called "intron" sequences are cut out from the RNA, while "exon" sequences are retained. Where there is a selection of different versions of exons, the cell may choose from among them in a targeted manner. This "alternative splicing" may result in the creation of different versions of a single protein with different properties.

Until now, it was not known whether alternative splicing also controls stem cell properties in planarians. The researchers identified splicing processes that operate only in the stem cells of the worms, and identified numerous alternative exons responsible for stem cell-specific protein variants. Surprisingly, introns were often not removed from the RNA, which meant that no more functioning proteins could be generated. The researchers also found small exon snippets - "micro exons" - in fully developed cells.

In subsequent experiments, the scientists switched off the proteins that control alternative splicing. One of these proteins is MBNL, which suppresses the production of stem cell-specific protein variants. They also discovered that the CELF protein counteracts MBNL by stimulating the production of these variants. During development from a stem cell to a tissue cell the two factors competed for predominance. This interaction between MBNL and CELF has been previously described only in mammalian cells.

"In our study we identified new mechanisms that we weren't aware of from the usual studies into mammalian stem cells. With this knowledge, it's now possible for us to look in a targeted manner for the same processes in human cells," says the author.

The scientists' work also raises fundamental questions about the function of stem cells in animals. Author said: "To find the antagonism between MBNL and CELF in flatworms is interesting from an evolutionary biologist's perspective. For the first time, we described mechanisms in stem cells in organisms from extremely distant branches of the evolutionary tree. What we found is probably a fundamental process throughout the animal kingdom." How environmental insults can lead to Parkinson's disease