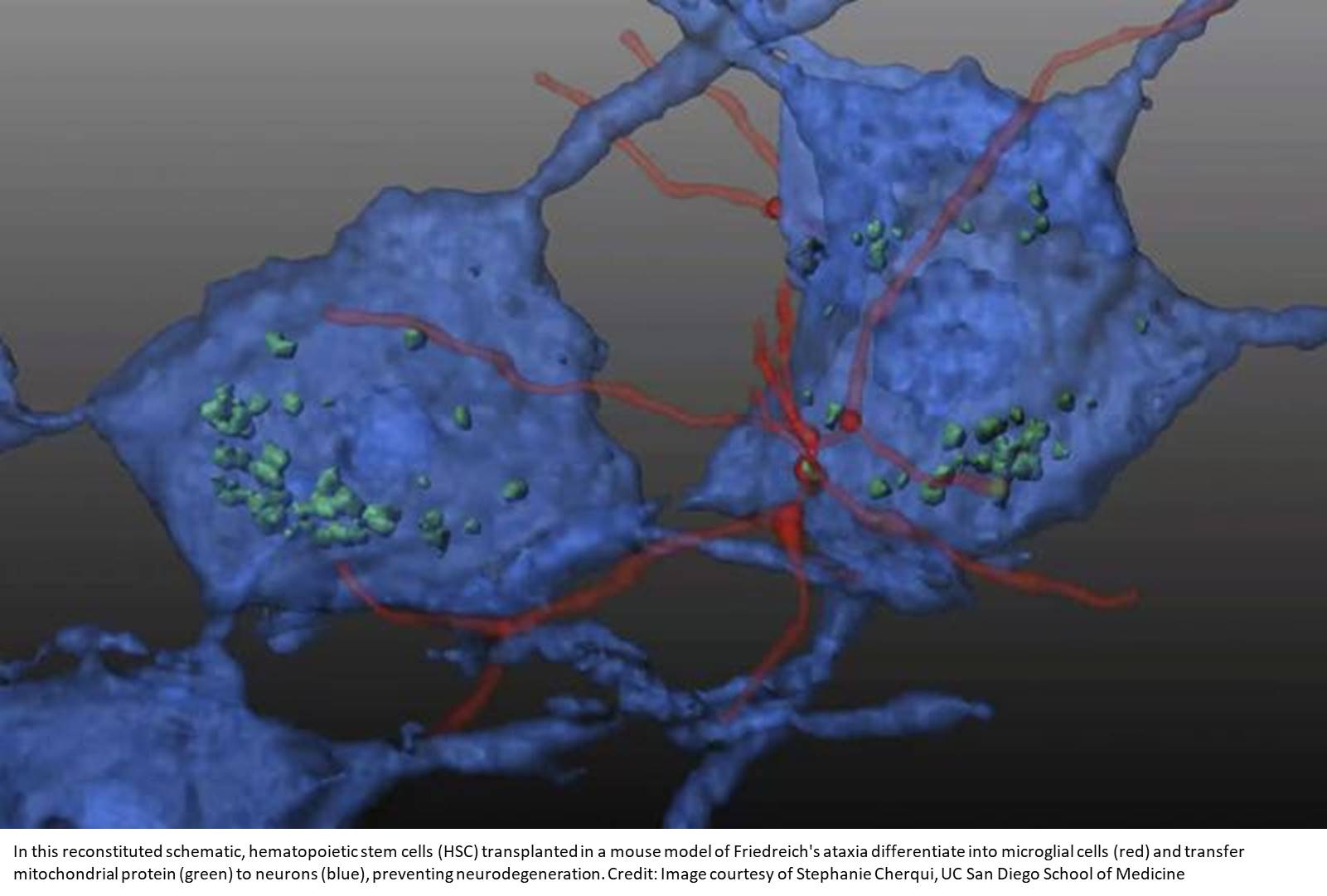 Friedreich's ataxia is an inherited, degenerative neuromuscular disorder that initially impairs motor function, such as gait and coordination, but can lead to scoliosis, heart disease, vision loss and diabetes. Cognitive function is not affected. The disease is progressively debilitating, and ultimately requires full-time use of a wheelchair. One in 50,000 Americans has FA.

FA is caused by reduced expression of a mitochondrial protein called frataxin (FXN) due to a two mutated or abnormal copies of the FXN gene.

The findings, published in Science Translational Medicine, suggest a potential therapeutic approach for a disease that currently is considered incurable.

Human hematopoietic stem and progenitor cells (HSPCs), derived from bone marrow, have become a primary vehicle for efforts to replace or regenerate cells destroyed by a variety of diseases. Previous research by the researchers had shown that transplanting wildtype or normal mouse HSPCs resulted in long-term kidney, eye and thyroid preservation in a mouse model of cystinosis, another genetic disorder.

In this study, the team transplanted wildtype HSPCs into an FA mouse model, reporting that the HSPCs engrafted and soon differentiated into macrophages in key regions of the mice's brain and spinal cord where they appeared to transfer wildtype FXN into deficient neurons and muscle cells.

HSPC transplanted IN FA mouse model showed abrogation of muscle weakness and locomotor deficits as was degeneration of large sensory neurons in the dorsal root ganglia (DRGs) and mitochondrial capacity was improved in brain, skeletal muscle, and heart. Transplanted HSPCs engrafted and then differentiated into microglia in the brain and spinal cord and into macrophages in the DRGs, heart, and muscle of YG8R FRDA mice.

Authors  observed the transfer of wild-type frataxin and Cox8 mitochondrial proteins from HSPC-derived microglia/macrophages to FRDA mouse neurons and muscle myocytes in vivo.

"Transplantation of wildtype mouse HSPCs essentially rescued FA-impacted cells," said the senior author, "Frataxin expression was restored. Mitochondrial function in the brains of the transgenic mice normalized, as did in the heart. There was also decreased skeletal muscle atrophy."

The scientists note that the mouse model is not perfect mirror of human FA. Disease progression is somewhat different and the precise pathology in mice is not fully known. However, the findings are encouraging and point toward a potential treatment for a disease that currently has none
.
http://ucsdnews.ucsd.edu/pressrelease/transplanted_hematopoietic_stem_cells_reverse_damage_caused_by_neuromuscula