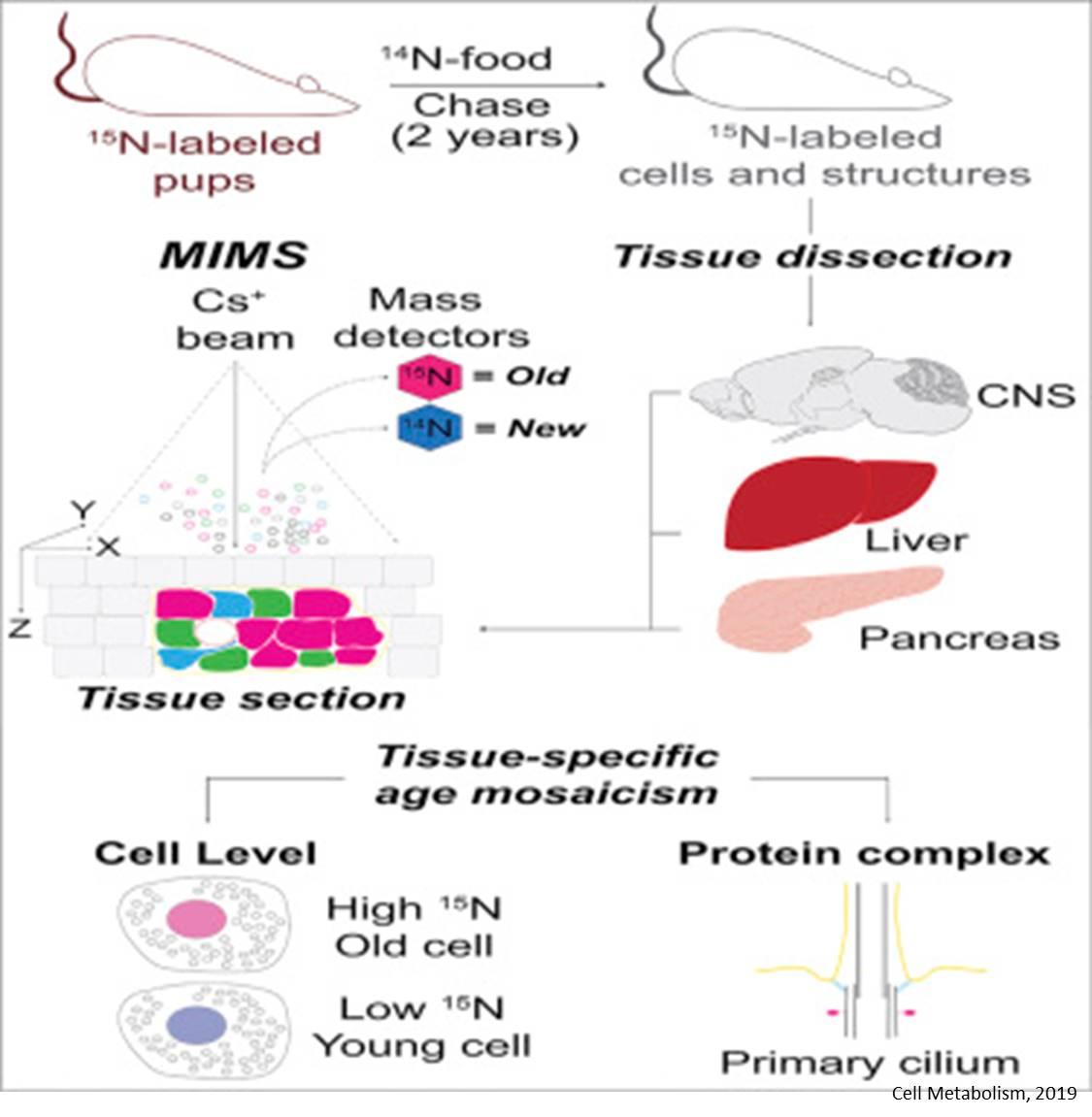 Scientists once thought that neurons, or possibly heart cells, were the oldest cells in the body. Now, researchers have discovered that the mouse brain, liver and pancreas contain populations of cells and proteins with extremely long lifespans--some as old as neurons. The findings, demonstrating "age mosaicism," were published in Cell Metabolism. The team's methods could be applied to nearly any tissue in the body to provide valuable information about lifelong function of non-dividing cells and how cells lose control over the quality and integrity of proteins and important cell structures during aging.

"We were quite surprised to find cellular structures that are essentially as old as the organism they reside in," says, the senior author. "This suggests even greater cellular complexity than we previously imagined and has intriguing implications for how we think about the aging of organs, such as the brain, heart and pancreas."

Most neurons in the brain do not divide during adulthood and thus experience a long lifespan and age-related decline. Yet, largely due to technical limitations, the lifespan of cells outside of the brain was difficult to determine.

"Biologists have asked--how old are cells in an organism? There is this general idea that neurons are old, while other cells in the body are relatively young and regenerate throughout the organism's lifetime," says the first author and scientist. "We set out to see if it was possible that certain organs also have cells that were as long-lived as neurons in the brain."

Since the researchers knew that most neurons are not replaced during the lifespan, they used them as an "age baseline" to compare other non-dividing cells. The team combined electron isotope labeling with a hybrid imaging method (MIMS-EM) to visualize and quantify cell and protein age and turnover in the brain, pancreas and liver in young and old rodent models.

To validate their method, the scientists first determined the age of the neurons, and found that--as suspected--they were as old as the organism. Yet, surprisingly, the cells that line blood vessels, called endothelial cells, were also as old as neurons. This means that some non-neuronal cells do not replicate or replace themselves throughout the lifespan.

The pancreas, an organ responsible for maintaining blood sugar levels and secreting digestive enzymes, also showed cells of varying ages. A small portion of the pancreas, known as the islets of Langerhans, appeared to the researchers as a puzzle of interconnected young and old cells. Some beta cells, which release insulin, replicated throughout the lifetime and were relatively young, while some did not divide and were long-lived, similar to neurons. Yet another type of cell, called delta cells, did not divide at all. The pancreas was a striking example of age mosaicism, i.e., a population of identical cells that are distinguished by their lifespans.

Prior studies have suggested that the liver has the capacity to regenerate during adulthood, so the researchers selected this organ expecting to observe relatively young liver cells. To their surprise, the vast majority of liver cells in healthy adult mice were found to be as old as the animal, while cells that line blood vessels, and stellate-like cells, another liver cell type, were much shorter lived. Thus, unexpectedly, the liver also demonstrated age mosaicism, which points to potential new paths of regenerative research for this organ.

"Thanks to new visualizing technologies we are able to pinpoint the age of cells and their supramolecular complexes more accurately than ever before. This opens new doors for studying all cells, tissues and organs in normal and in disease states," says co-leader of the study.

"Determining the age of cells and subcellular structures in adult organisms will provide new insights into cell maintenance and repair mechanisms and the impact of cumulative changes during adulthood on health and development of disease," adds the co-leader. "The ultimate goal is to utilize these mechanisms to prevent or delay age-related decline of organs with limited cell renewal."

Next, the authors plan to decipher the difference in lifespans for nucleic acids and lipids. They also want to understand how age mosaicism relates to health and diseases such as type 2 diabetes.

Why do more men than women commit suicide?

'Spare tire' may be tougher on your heart than 'love handles'