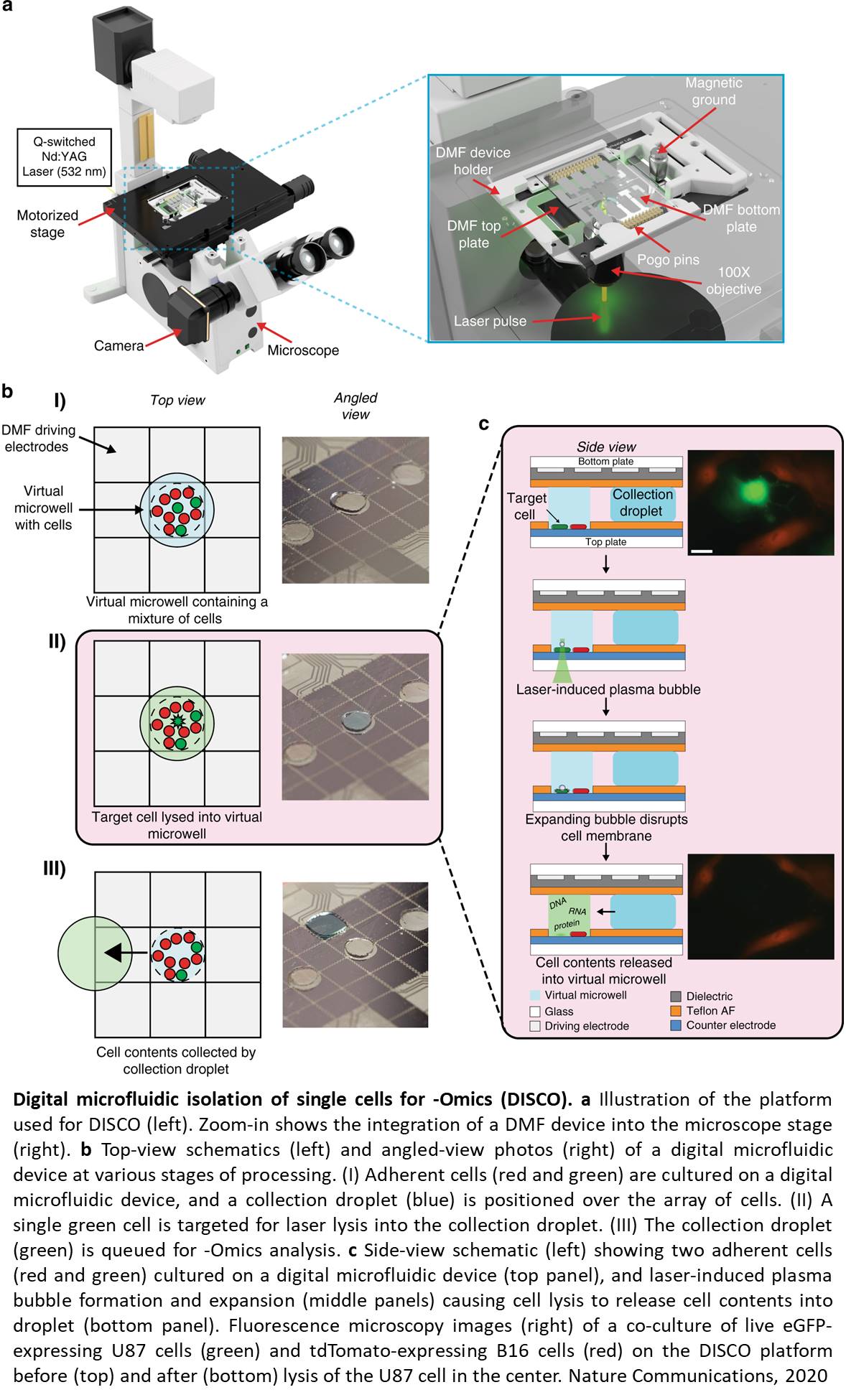 Scientists can now select individual cells from a population that grows on the surface of a laboratory dish and study their molecular contents. The new tool will enable a deeper study of stem cells and other rare cell types for therapy development.

The method is the first to marry cell microscopy with omics platforms to link the cells' physical parameters that are visible by eye, such as appearance, the presence of surface markers or cell-cell contacts, to their molecular makeup.

"We give the user the power to take beautiful fluorescence microscopy images to learn everything that can be learned about cells growing in situ and then connect that information with the cell's genome, transcriptome and proteome," says the senior author.

The platform is described in a paper out in the journal Nature Communications.

Named DISCO, for Digital microfluidic Isolation of Single Cells for -Omics, the method allows researchers to select single cells in their local environment and analyse their contents with the DNA and protein sequencing technologies to read the cell's DNA (genome), the genes' RNA transcripts (transcriptome) and protein molecules (proteome).

The rise of single-cell analyses over the past five years has enabled researchers to measure tens of thousands of molecules in each cell, transforming their ability to study tissues and organs on a granular level. But these approaches miss important information about the cells' physical features and local environment because the cells have to be placed in suspension and separated from each other prior to analysis.

"There's a revolution going on right now with single cell omics," says the lead. "But I came across people who were disappointed that there weren't able to capture phenotypic information about the cell in its in situ environment."

"And I thought we might be able to come up with a way to select particular cells from that population and analyse them," the author says.

DISCO is composed of a microscope fitted with a high frequency laser and a microfluidic chip for the collection of cellular material. The microscope allows the user to take detailed images of the target cell before shining the laser on it. The energy from the laser causes a tiny bubble to form and pop in the proximity of the cell, rupturing its membrane and shooting its contents up into a droplet on the microfluidic chip, from where it is retrieved for molecular sequencing.

"Our platform focuses on the metadata that you lose when you do single cell suspension, things like cell position, what were its morphological properties, who were its neighbours? Those are all the things that we can capture before we do the single cell sequencing ," says another author.

"To our knowledge, this is the only platform that can take cells in culture and do this kind of thing," the author says.

In proof of principle experiments, the researchers demonstrated DISCO's ability to faithfully relate omics data to individual human and mouse brain cancer cells that were cultured side by side.

But the findings also brought into sharp focus the extent to which the contacts between cells can influence their molecular states. The expression of a whopping 5,000 mouse genes--about a fifth of the genome-- was altered in individual mouse cells that had been surrounded by human cells instead of their own kin.

The findings could have important implications for many labs that seek to gain a better understanding of healthy and diseased human tissue, such as tumors, by growing them in mice so that they can be studied in a whole-body environment. If gene expression is similarly affected in the human graft, these changes could have ramification for treatment development, said Wheeler.

Fortunately, DISCO may soon offer a window into the cells in their natural environment as the researchers are working to adapt it to the analysis of tissue slices. Their ultimate goal is to apply DISCO to the study of rare cell types, such as stem cells, whose regenerative potential is in large part regulated by their immediate environment, to help advance new therapies.