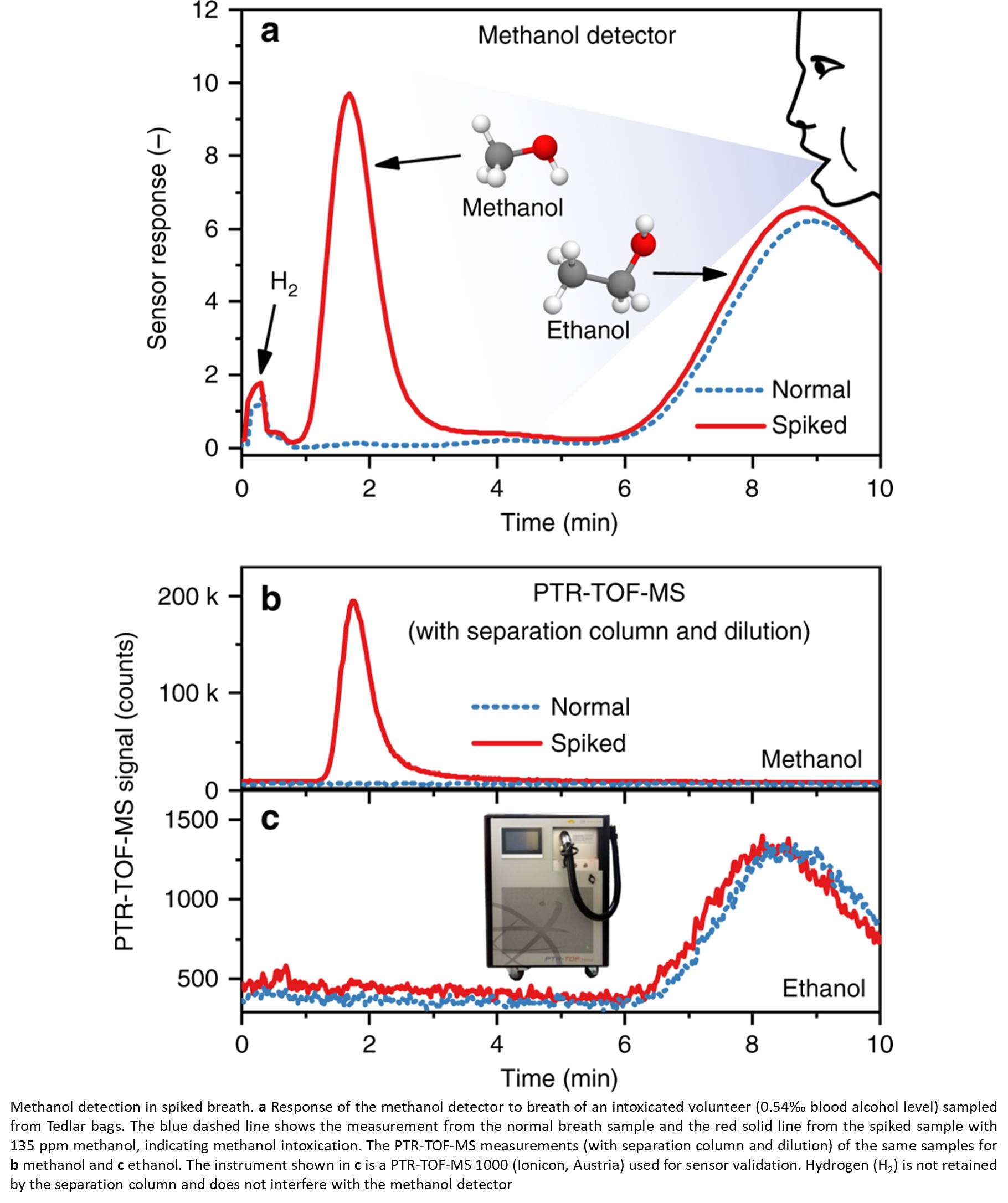 Methanol is sometimes referred to as ethanol's deadly twin. While the latter is the intoxicating ingredient in wine, beer and schnapps, the former is a chemical that becomes highly toxic when metabolised by the human body. Even a relatively small amount of methanol can cause blindness or even prove fatal if left untreated.

Cases of poisoning from the consumption of alcoholic beverages tainted with methanol occur time and again, particularly in developing and emerging countries, because alcoholic fermentation also produces small quantities of methanol. Whenever alcohol is unprofessionally distilled in backyard operations, relevant amounts of methanol may end up in the liquor. Beverages that have been adulterated with windscreen washer fluid or other liquids containing methanol are another potential cause of poisoning.

Until now, methanol could be distinguished from ethanol only in a chemical analysis laboratory. Even hospitals require relatively large, expensive equipment in order to diagnose methanol poisoning. "These appliances are rarely available in emerging and developing countries, where outbreaks of methanol poisoning are most prevalent," says a research group leader.

The researchers have now developed an affordable handheld device based on a small metal oxide sensor. It is able to detect adulterated alcohol within two minutes by "sniffing out" methanol and ethanol vapors from a beverage. Moreover, the tool can also be used to diagnose methanol poisoning by analyzing a patient's exhaled breath. In an emergency, this helps ensure the appropriate measures are taken without delay.

There's nothing new about using metal oxide sensors to measure alcoholic vapors. However, this method would unable to distinguish between different alcohols, such as ethanol and methanol. "Even the breathalyser tests used by the police measure only ethanol, although some devices also erroneously identify methanol as ethanol," explains the lead author of the study.

First, the scientists developed a highly sensitive alcohol sensor using nanoparticles of tin oxide doped with palladium. Next, they used a trick to differentiate between methanol and ethanol. Instead of analyzing the sample directly with the sensor, the two types of alcohol are first separated in an attached tube filled with a porous polymer, through which the sample air is sucked by a small pump. As its molecules are smaller, methanol passes through the polymer tube more quickly than ethanol.

The measuring device proved to be exceptionally sensitive. In laboratory tests, it detected even trace amounts of methanol contamination selectively in alcoholic beverages, down to the low legal limits. Furthermore, the scientists analysed breath samples from a person who had previously drunk rum. For test purposes, the researchers subsequently added a small quantity of methanol to the breath sample.

The researchers have filed a patent application for the measuring method. They are now working to integrate the technology into a device that can be put to practical use. "This technology is low cost, making it suitable for use in developing countries as well. Moreover, it's simple to use and can be operated even without laboratory training, for example by authorities or tourists," the author says. It is also ideal for quality control in distilleries.

Methanol is more than just a nuisance in conjunction with alcoholic beverages, it is also an important industrial chemical - and one that might come to play an even more important role: methanol is being considered as a potential future fuel, since vehicles can be powered with methanol fuel cells. So a further application for the new technology could be as an alarm sensor to detect leaks in tanks.