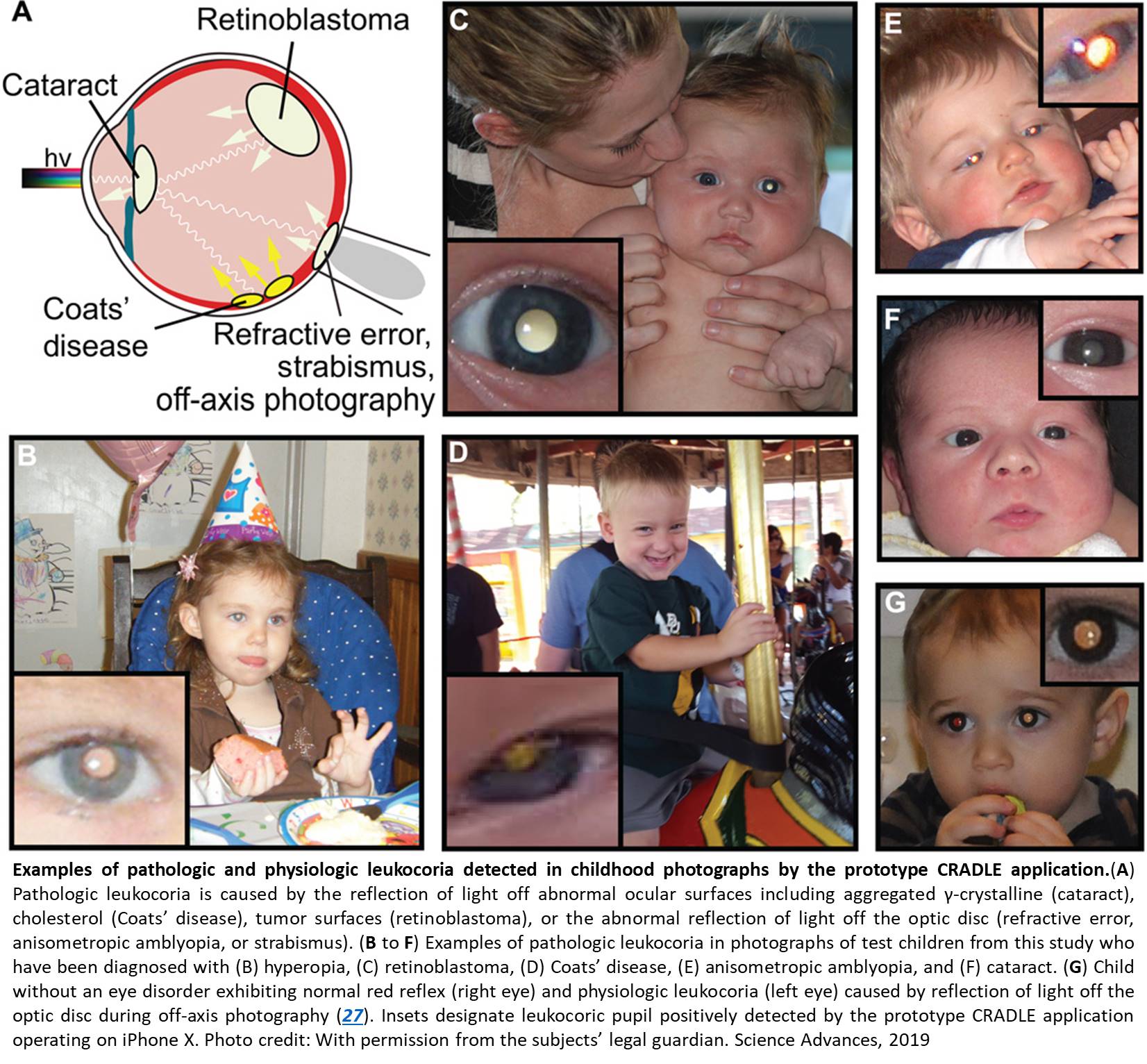 A researcher's prototype smartphone app -- designed to help parents detect early signs of various eye diseases in their children such as retinoblastoma, an aggressive pediatric eye cancer -- has passed its first big test.

The CRADLE app (ComputeR Assisted Detector LEukocoia) searches for traces of abnormal reflections from the retina called leukocoria or "white eye," a primary symptom of retinoblastoma, as well as other common eye disorders. The study, published in the journal Science Advances, found the app is an effective tool to augment clinical leukocoria screenings, allowing parents to efficiently and effectively screen their children more often throughout their development.

According to the study's first author, researchers determined the sensitivity, specificity and accuracy of the prototype by analyzing more than 50,000 photographs of children taken prior to their diagnosis. For children with diagnosed eye disorders, CRADLE was able to detect leukocoria for 80 percent of the children. The app detected leukocoria in photos that were taken on average of 1.3 years prior to their official diagnosis.

The effectiveness of traditional screenings during a general physical exam is limited, with signs of retinoblastoma via the detection of leukocoria in only 8 percent of cases. CRADLE's sensitivity for children age 2 and younger surpassed 80 percent. That 80 percent threshold is regarded by ophthalmologists as the ''gold standard" of sensitivity for similar devices, the author said.

Researchers found the CRADLE app to be more effective simply by the breadth and frequency of its sample sizes: everyday family photos, according to the study. Given the number of photos taken by family and friends and the variety of environments, there is a variety of opportunities for light to reflect off the ocular lesions regardless of its location in the eye.

As the app's algorithm has become more sophisticated, its ability to detect even slight instances of leukocoria has improved.

"This is one of the most critical parts of building the app," the author said. "We wanted to be able to detect all hues and intensities of leukocoria. As a parent of a child with retinoblastoma, I am especially interested in detecting the traces of leukocoria that appear as a 'gray' pupil and are difficult to detect with the naked eye."

Initially, the CRADLE app was used primarily to identify retinoblastoma -- a rare eye disease that is the most common form of eye cancer in children up to age 5. The authors created the app in 2014 for the iPhone and in 2015 for Android devices after the author’s son lost his right eye, but theleft eye was able to be salvaged.

"We suspected that the app would detect leukocoria associated with other more common disorders and some rare ones," the author said. "We were right. So far parents, and some doctors, have used it to detect cataract, myelin retinal nerve fiber layer, refractive error, Coats' disease, and of course retinoblastoma."

The app can be downloaded for free and can be found under the name "White Eye Detector."