A technology to detect autism 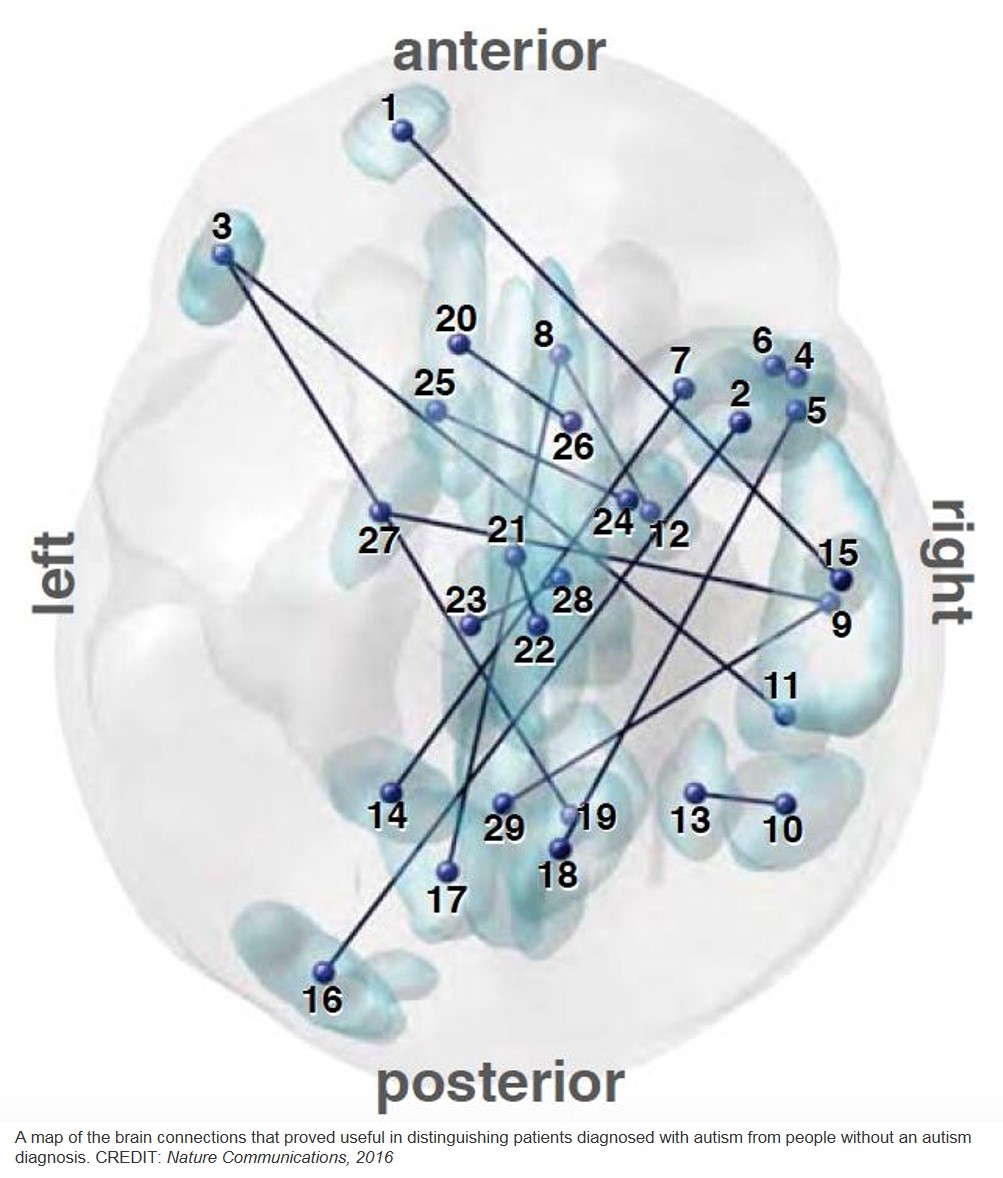 The technology is a computer algorithm called a "classifier" because it can classify sets of subjects -- those with an autism spectrum disorder and those without -- based on functional magnetic resonance imaging (fMRI) brain scans.

By analyzing thousands of connections of brain network connectivity in scores of people with and without autism, the software found 16 key interregional functional connections that allowed it to tell, with high accuracy, who had been traditionally diagnosed with autism and who had not. The team developed the classifier with 181 adult volunteers at three sites in Japan and then applied it in a group of 88 American adults at seven sites. All the study volunteers with autism diagnoses had no intellectual disability.

In another way of validating the classifier, the researchers asked whether the differences it notes in the 16 connections were predictive not only of whether a person had an autism diagnosis at all, but whether they relate to performance on the main diagnostic method currently available to clinicians, the Autism Diagnostic Observation Schedule. ADOS is based not on markers of biology or physiology, but instead on a doctor's interviews and observations of behavior. The classifier was able to predict scores on the ADOS communications component with a statistically significant correlation of 0.44.

The correlation suggests that the 16 connections identified by the classifier relate to attributes of importance in ADOS. When the researchers examined where these 16 connections are and what brain networks they affect, they found that 41 percent of the specific brain regions in which the 16 connections reside belonged within the cingulo-opercular network, which matters to brain functions such as conceiving of other people, face processing and emotional processing. Difficulties with such social and emotional perception tasks are important symptoms in autism spectrum disorders.

Finally, the team looked to see whether the classifier appropriately reflects the similarities and differences between autism spectrum disorders and other psychiatric conditions. Autism, for example, is known to share some similarities with schizophrenia but not with depression or attention deficit hyperactivity disorder, as indicated by a previous genome study. Applied to patients with each of these other disorders compared to similar people without the conditions, the classifier showed moderate but statistically significant accuracy in distinguishing schizophrenia patients, but not depression or ADHD patients.

Subjects only needed to spend about 10 minutes in the machine and didn't have to perform any special tasks. They just had to stay still and rest. Despite that simplicity and even though the classifier performed unprecedentedly well as a matter of research and is not yet ready to be a clinical tool. While the future may bring that development, refinements will be necessary first.

"The accuracy level needs to be much higher," author said. "Eighty percent accuracy may not be useful in the real world." It's also not clear how it would work among children, as the volunteers in this study were all adults.

But if the classifier's accuracy can be improved further, the researchers hope that it can be used not only as a physiology-based diagnostic tool but also for monitoring treatment. Doctors perhaps will be able to use the tool someday to monitor whether therapies produce changes in brain connectivity, author said.